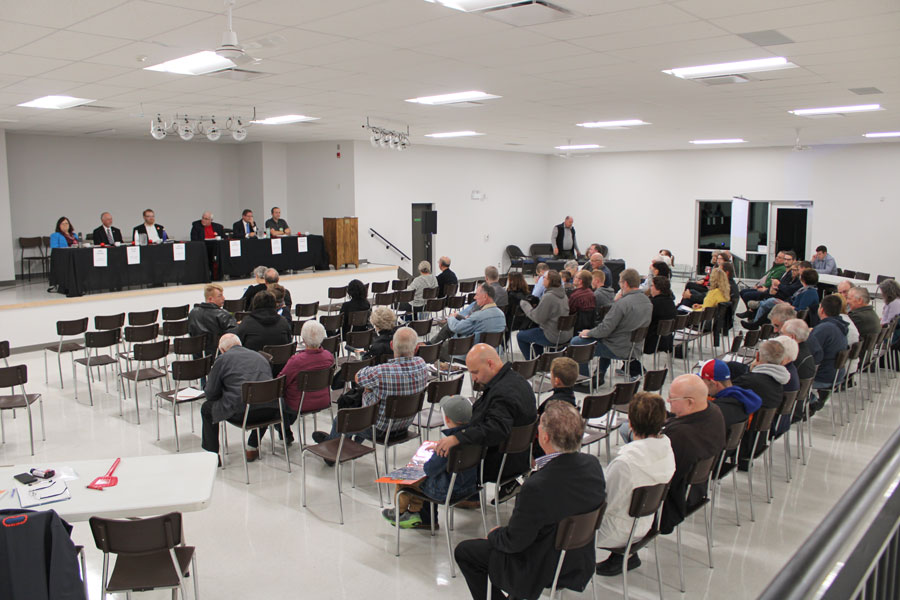 MOOREFIELD – Perth-Wellington federal candidates went head to head on policies at the Maryborough Community Centre during a candidates meeting on Oct. 3.

Six candidates are running to represent the riding.

Conservative John Nater is seeking his second term, having been first elected in 2015. 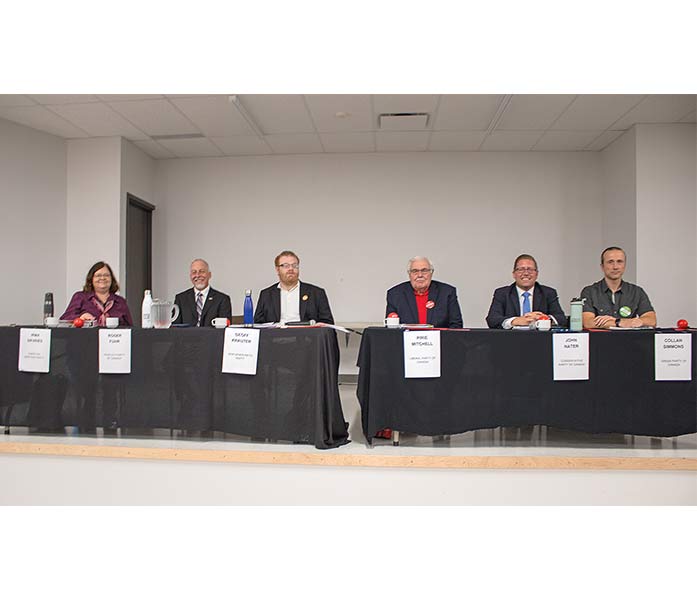 About 70 people were at the meeting hosted by the Wellington Federation of Agriculture  (WFA) and Mapleton Chamber of Commerce.

In opening remarks Simmons said, “I want to get something out of the way right away. The Green Party is not against farmers. We want to look at farming through the long lens of climate change and think about where we need to be in 20 years.”

He said the effects of climate change would decrease the amount of arable land elsewhere in the world much sooner, so Canadian farmers needed to be ready to “feed the world.”

In his opening remarks Fuhr explained the PPC, formed a year ago, focuses its platform on four principles – freedom, respect, fairness and personal responsibility – while its goal is “to provide a platform that will put Canadians first, not other people. Canadians must come first,” said Fuhr.

When asked about providing Canadian farmers with  full offset trade compensation, DeVries in turn asked, “what’s in the contract? What’s that going to cost us?”

DeVries said she believes Canada needs tariffs “to regulate and keep a positive peace between our two countries,” adding the CHP is advocating a re-examination of the Trans-Pacific Partnership (TPP).

Fuhr stated that the PPC would decrease income tax to 10 per cent for farmers “along with corporate companies as well.”

Krauter said the NDP would protect supply management and added governments should take a “consultative approach with Canadians” to making trade deals like the Canada-United States-Mexico Agreement (CUSMA) and Canada-European Union Comprehensive Economic and Trade Agreement (CETA) “instead of negotiating these agreements in secret.”

Nater said the Conservatives would help farmers by expanding the market internationally.

“One of the things is the Asia Pacific market, we have a great potential there, especially with it for red meat sectors in Japan, for example.”

Along with supply management, Simmons said the investor state dispute settlement provisions in international trade agreements need to be addressed.

“In a lot of these international trade regulations … foreign corporations who do not get access to our market … are allowed to sue Canada in order to recoup their potential profits,” he said.

Candidates were also asked specifically if their parties would protect supply management by ensuring no further access to the Canadian market as part of future trade deals.

Only Fuhr stated that his party would “wind down supply management” over a period of about four years.

When asked about how the parties would invest in rural infrastructure to increase agricultural transportation, Fuhr and DeVries said poor quality infrastructure is a result of  federal bureaucracy. The PPC will look at cutting the size of the government.

Nater and Simmons said the federal gas tax would remain as a funding source for improving rural infrastructure.

Nater added there needs to be a streamlined process for approving municipal applications.

The Green Party would support doubling the gas tax and rename it the municipal infrastructure fund, as well as increase access to rail transport.

Mitchell said he would advocate for a review led by local farmers “to see how the infrastructure can be improved.”

Mitchell acknowledged that while electoral reform was a promise made four years ago by Prime Minister Justin Trudeau, Mitchell said as he understood it, Trudeau “couldn’t get cross-party agreement on how to do it.”

“If you say, okay, the Green Party got 10% of the vote, but 2% of the seats, then they deserve … more people, could you come up with eight names? I find that’s difficult in a democratic process to do,” said Mitchell.

However, he added, “I’m not sure that we shouldn’t look at it again.”

Nater refuted Mitchell’s comment, saying “as an associate member on the special committee on electoral reform, I can tell you there was actually cross-party support.” Nater said the Conservatives are and were in favour of electoral reform  but only with a national referendum “with the consent of the population.”

Simmons said the Green Party supports proportional representation with a ranked ballot system “that would get away from the problem that [Mitchell] talked about where you then have to select candidates after the election.”

The PPC is opposed to electoral reform, Fuhr said.

DeVries said the CHP thinks there needs to be more  broadband services in rural Ontario.

It plans to increase broadband by borrowing from the Bank of Canada, while Fuhr said the PPC will invest in high speed infrastructure with some of the tax cuts the party plans to make.

Krauter said the NDP plans to make rural highspeed internet accessible without delay and Mitchell outlined targets set by the 2019 federal budget: “95% of Canadian homes and businesses will have access to internet speeds of at least 50/10 megabytes by 2026 – and 100% by 2030.”

Nater said the Conservative party would “support the small, independent, cooperatively owned or privately owned telecoms in our small communities, … give them the assistance, in places where there’s not a business case to be made at the present time.”

Krauter said the NDP protects the rights of law abiding gun owners, but if elected would allow city mayors to introduce their own regulations.

DeVries said the CHP also supported the right of law abiding citizens to own guns.

“The plague of school shootings is not due to the increase in firearms, but to the decrease in morality in families today,” she said.

Mitchell also said there needs to be more control on assault rifles “because we don’t want to have the same thing that happened at École Polytechnique.”

The Green Party would also investigate “straw purchases where somebody is buying a large number of illegal guns and then selling them on the black market,” said Simmons.