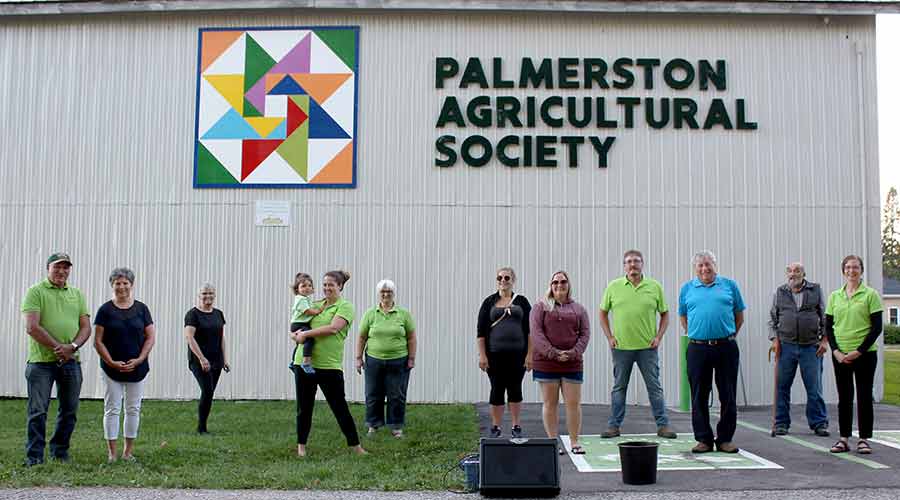 PALMERSTON – Fair season is being celebrated a bit differently this year.

This year’s Palmerston Fair was scheduled to begin on Aug. 19 but was postponed earlier this year due to the COVID-19 pandemic.

Despite the fair not taking place, the Palmerston Agricultural Society has kept busy with several projects and initiatives, including cosmetic work to the barn and 4-H stable at the Palmerston Fairgrounds.

To celebrate the completion of the work, which included a new sign and barn quilt on the barn, the group held a special ceremony last Wednesday on what would have been the opening night of the fair.

“Tonight would have been our ambassador competition evening and an opportunity for our organization to show our thanks and appreciation for their commitment,” said Tiffany Byrd, president of the Palmerston Agricultural Society.

With the ambassador competition also cancelled this year, Byrd told the crowd of about 60 people that co-junior ambassadors Sophie Glendenning and Madison Leitch, and senior ambassador Rebecca Dick have all agreed to continue their roles as an ambassador for the next year.

Byrd also thanked the members of the ag society, including Don Hartung, Lynda Alexander, Angela Schneider and Chrissy Schneider for their work on projects during the past several months.

Town of Minto Mayor George Bridge brought greetings from the town, noting that it was great to be at the event as the fair is something he looks forward to each year.

“I thought we weren’t going to have anything this year,” he said. “I was disappointed that all of our fairs have been cancelled, it’s really sad in a way because they’re such great events.”

The final item on the agenda before the big reveal was announcing the winner of the Wellington County Barn Quilt Trail Association’s Viewer’s Choice Award, sponsored by the Palmerston Agricultural Society.

The association, whose mission is to bring barn quilts and rural artwork back to the forefront, features more than 65 barn quilts. People were given the chance to vote for their favourite quilt on the trail on the group’s Facebook page earlier this month.

Steven Donaldson was named the winner of the contest.

“I want to express our appreciation to the Palmerston Agricultural Society for sponsoring the award, as well as partnering to create and install this wonderful barn quilt,” said Bonnie Dopfer of the Wellington County Barn Quilt Trail Association.

To end the evening, the new barn quilt and sign were unveiled on the side of the barn.

This year’s fair theme, Around the World in Three Fair Days, will be carried over to the 2021 fair.