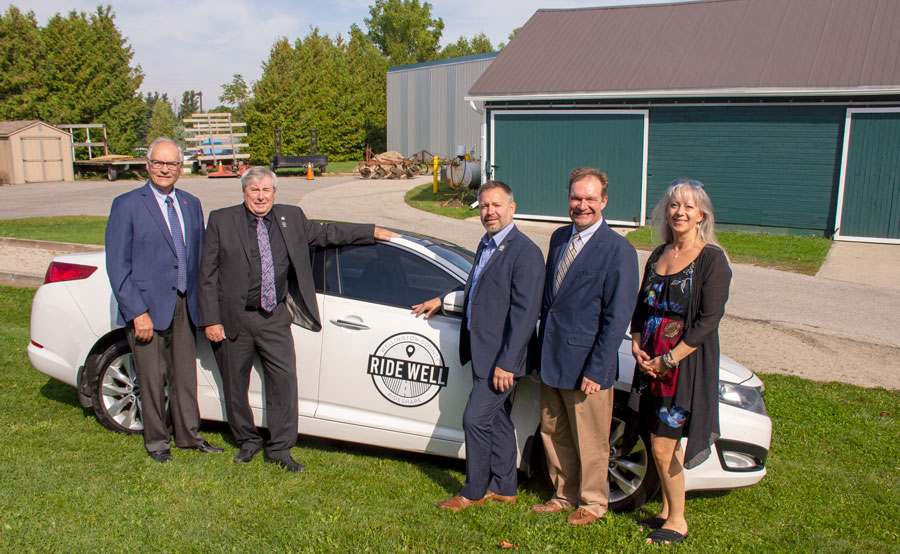 GUELPH – Wellington County has temporarily reduced vehicle availability in its new Ride Well program in response to  lower-than-anticipated ridership in the first three months of operation.

“Ridership continues to grow as the program establishes itself,” stated economic development director Crystal Ellis in a Jan. 30 report.

The app-based ride sharing service, launched Oct. 1, provided 75 rides in the first month, 146 in November and 173 in December for a three-month total of 394.

“Given the slower start to the service, staff have consulted with RideCo about adjusting the supply of vehicles within the existing demand,” explained Ellis.

“Making these adjustments will maintain vehicle availability for riders and decrease operating costs from $27,300 to $20,150 per month, allowing ridership and revenue to become established,” the report states.

“The annual contract costs budgeted for Ride Well were initially set at $327,600. The difference in cost between the current annual vehicle costs and the recommended annual vehicle costs is $85,800. Staff recommend that the annual budget be reduced by $30,000 to account for the reduced hours, but provide room to increase the vehicle hours as ridership increases.”

“We’re now getting close to connecting with the Owen Sound bus service that’s coming up. I think that’s another big win.”

He added, “And we’re looking at setting up the employer service which I think is another big win. If we can get to some of our factories that are right now busing people … if we can get them hooked up to our system that would be a good opportunity for increasing ridership.”

Bridge also noted there have been some initial problems with payment options the service provides.

“Some of the seniors don’t have a credit card. So that’s a little difficulty. So we’re trying to work on some of those things,” Bridge explained.

Councillor Diane Ballantyne asked “why, when it seems the program is clearly picking up steam and it takes time to build and we’re working on the marketing for it, that it’s being cut back?”

She noted some vehicle hours were cut during prime commute times.

“It’s an excellent program. The app works really well. The drivers are on time,” she said.

“Being able to trace how your vehicle is moving toward your destination is excellent and it is clearly picking up steam. I mean with the new numbers in January its more than tripled since it was introduced in October.”

Bridge said the reductions would only continue until demand increases.

“If we look like we’re going to need to put more hours back in we will, but those are the areas where we felt we were not getting usage,” he stated.

Ellis added, “The whole premise of the app is that they are shared rides to decrease the cost … We were finding that we were having a lot of single rides happening at the beginning of the program. So decreasing the vehicle hours will just allow for that shared capacity, for it to be more efficient.

She continued, “If we do find that we need more vehicles on the road … we can make those adjustments to meet the needs where the ridership is higher or lower.”

“The hours aren’t changing, just the number of cars on the road, which is pretty easy to change,” noted councillor Doug Breen.

County council approved the economic development committee recommendation  to approve the revised vehicle schedule and a $30,000 reduction in the operating budget to reflect the temporary reduction in vehicle hours.

The Ride Well program was established with the assistance of a Community Transportation Grant of $449,500 from the province.