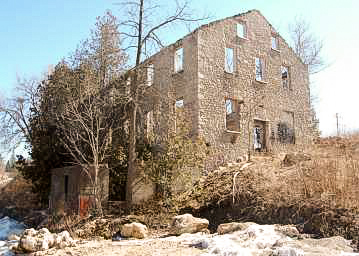 ELORA – Centre Wellington council has endorsed a heritage impact assessment that suggests the dismantling and relocation of the Potter Foundry ruins (Kiddie Kar Factory) in Elora.

Brian Blackmere, Pearle Hospitality planner/project manager, explained at a special council meeting on Aug. 22 that originally the idea was for the Potter Foundry to act as the lobby of the Elora South Condominums and be incorporated into the structure at 6525 Wellington Road 7.

“If that were in fact to happen, the Potter Foundry would have been taken out of the public realm entirely,” he said. “It would become the property, ultimately, of the condo association and run by the condo board, which really didn’t guarantee its integrity going forward.”

Instead, Pearle Developments is proposing a U-shaped residential building that will allow better view for residents and avoid having a high wall running along the trail by the river, Blackmere said.

To do that, the Potter Foundry ruins need to be relocated.

A Grand River Conservation Authority (GRCA) planner and arbourist did an assessment along the river and looked for a location with grading similar to where the ruin sits now and for a site that would have the least environmental impact on the environmentally sensitive area to the west of the development, which is also owned by Pearle Hospitality.

“From a heritage viewpoint the objective was to keep that building as close to the current location as we possibly could and this is where we ended up,” Blackmere said. “We’re about 70m away … from where it currently is but you have a very similar grade so it can be reconstructed in the same fashion as now without losing any of the existing heritage attributes to the village.”

When the foundry is relocated, Blackmere said “we’re going to be removing trees on the south side of that building in a fairly major way.

“We’re going to be very careful with the species that are replanted there, that they won’t occlude views of the Potter Foundry because we very much want people to see that from Wellington Road 7.”

The existing trail system runs to the west of the new Potter Foundry site and will allow people to actually enter into the ruin during their hike.

“At heritage we did speak quite a bit about this … and some of it was that element of surprise, that element of discovery to come upon something that I think all of us as kids as we walk those trails to suddenly step in the forest and go ‘what is this?’,” councillor Stephen VanLeeuwen said. “And a lot of us who have lived here share that feeling of suddenly coming upon that building through the trees.

“The idea of having it accessible on the trail system is very important.”

Certain building code requirements will need to be met during reconstruction so that it’s safe for the public to access.

Councillor Stephen Kitras asked why the cultural asset, which is recognizable, is being moved to a less prominent location.

“In terms of cultural view impact, people won’t see it, they won’t see it from the main part of the town at all and so I’m just wondering why it wouldn’t be moved with some of the other assets that are there and then it would be immediately apparent to people coming into town,” he said.

Blackmere explained that it is good heritage practice to keep the relocation as close to the original site as possible. He also explained that with tree removal the building will still be visible from Wellington Road 7.

Township senior planner Mariana Iglesias said the site had a holding zone on it to ensure certain provisions are met, to protect and recognize heritage features, before the land can be developed. One of these conditions was the submission of a heritage impact assessment (HIA) and conservation plan to address certain heritage resources and their long-term conservation.

The HIA including the Potter Foundry was completed by Robinson Heritage Consulting and was reviewed by the heritage committee and staff in January. More information was requested and the final HIA was submitted in July and reviewed earlier in August.

“After much discussion the committee endorsed the HIA, which includes relocation of the Potter Foundry ruin, which is a significant heritage resource and it would be relocated within the site, approximately 75 metres to the south west where it will continue to be accessible to the public through the trail system in much the same configuration,” Iglesias said.

She added that a conservation plan must be prepared before building permits are issued and before the foundry is disassembled and reassembled. The recommendation also includes the designation of the Potter Foundry as a heritage building after relocation.

“Heritage conservation and redevelopment may seem at odds; however they can be achieved in harmony if the proper tools are in place,” she said.

The news of the relocation of the Potter Foundry came with mixed reviews.

Resident Ian Rankine spoke on behalf of Daniel Bratton and asked that the Potter Foundry be designated as a heritage building. Through his letter, Bratton said he may appeal the decision to the Ontario integrity commissioner “since the township is not exerting due process and is not following policies and procedures under the Ontario Heritage Act and has also violated its official plan.”

He said that as a kid he played in the ruins, despite his mother telling him to stay away.

“It was ruins back then and it’s dangerous,” he said. “There’s no roof on the place and I thought it became more dilapidated and … there’s literally trees growing out of it.

“To see what they’re going to do to try and restore the Kiddie Car Factory and move it and make it part of the public access.

“The public access to me has always been … the most important piece.”

Council endorsed the decision to allow the removal of the Potter Foundry, with only Kitras in opposition.

This was one step that contributed the removal of a holding provision on that section of the property.