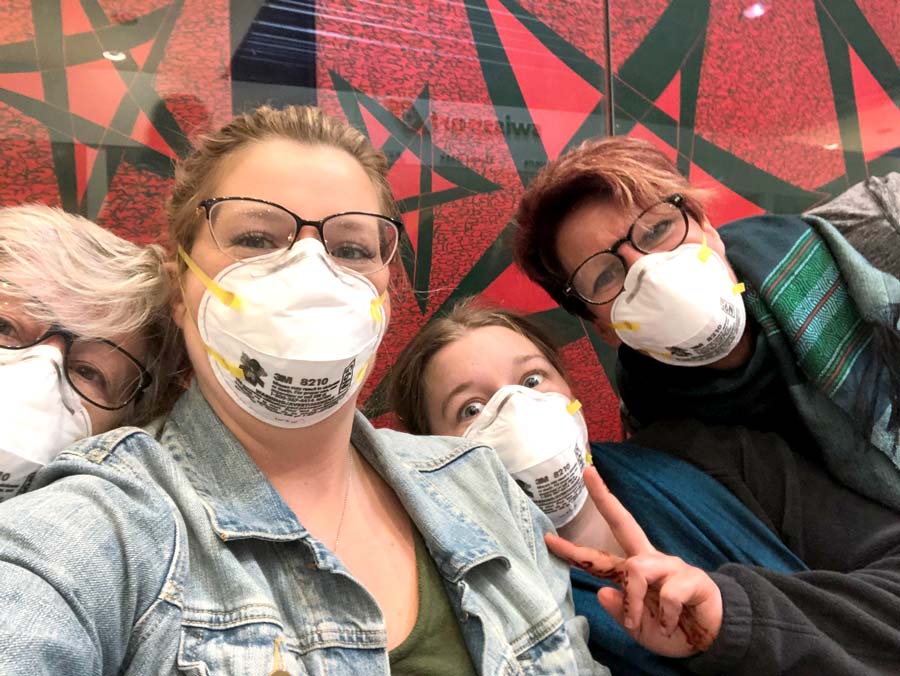 MOUNT FOREST – “I cannot describe the sense of relief and freedom it felt to get on that last plane. We knew we were going home.”

Those words from Stacey Bell describe the feeling she had on March 19 as she boarded a plan from London, England that would lead her back home.

Bell and three friends were returning from a vacation to Morocco that turned into a frantic multi-country sojourn when they became stranded overseas, just as the federal government was calling Canadians home in response to a global pandemic.

Bell and Lara Riehl of Mount Forest, as well as Catherine Schwass of Priceville and Emily Golem of Hanover, left March 12 on a personalized tour of Morocco through UK-based Exodus Travel. The group was to attend a yoga and wellness retreat in Agadir, organized through Hanover-based Yoga Barn.

They registered with the Canadian embassy on arrival and the following day the embassy issued a warning about the possible suspension of flights due to the COVID-19 outbreak.

The women contacted their travel agent, who cobbled together a route home with flights through Tunisia, Istanbul and Amsterdam.

However, after arriving at Casablanca Airport in Morocco, they learned their flight had been cancelled and, after waiting all day for another flight, were advised their carrier, Tunisair, would be focussing on flying Tunisian nationals home.

Tim Sparks, executive assistant to Perth-Wellington MPP John Nater, said in a March 17 telephone interview he had been in direct contact with members of the local group and efforts were underway through contacts with the Moroccan government to help the group and other stranded Canadians get home.

At 4am on March 18, Bell said her travel agent called to say the group needed to get in a cab and drive three hours to the Marrakech airport for a 1:50pm flight to London, England’s Stanstead airport.

“So I rallied up my travel buddies and we went down to the front desk and got a cab. We were originally going to take a transport vehicle with the tour company Exodus, but they were taking too long and we wanted to get there ASAP,” said Bell in an email to the Advertiser.

“So the desk attendant called us a cab. We asked for water for our journey and they informed us that they were actually all out. Horrible to know that if we hadn’t gotten this information for a flight we wouldn’t have had access to bottled safe water.”

“She learned this through our Canadians in Morocco Facebook page that more updates happened through Twitter than anywhere else,” said Stacey.

“That group now has over 600 members. She scoured the UK and Canadian embassy page and saw a post about Ryanair repatriating their UK citizens that day. The Canadian embassy page retweeted it and Sarah got all of us a flight. She luckily saw the post at the exact moment they posted it or we never would have gotten it.”

The 1:50 flight from Marakkesh to Stansted was delayed by just over three hours – the airplane and crew were ready, but Marrakech airport was not.

“Needless to say they are a very disorganized place,” Bell noted.

The group boarded just after 5pm and landed in Stansted just after 9pm. A shuttle bus took them to Heathrow airport, where they stayed overnight in the airport hotel and got up at 5am for a 9am flight to Toronto lasting nearly eight hours.

“Sarah knew that once we got to London we had way more options. And so from the moment she found our Ryanair flights she searched and searched and very luckily found us the last air Canada flight to Toronto from Heathrow airport,” Bell explained.

“Once we landed in Toronto I think we all bawled. I have never felt more weight lifted off of me than in that moment,” she recalled.

Unsure of what to expect from airport security, Bell said the travellers were prepared to provide full health history updates, including temperature checks and multiple questions.

“I have to say that I was extremely disappointed in their screening process,” said Bell.

“Some, but not all, of us were given a handout regarding COVID-19 and the symptoms and what to do should we feel any. At border control the officer only asked, ‘How are you feeling today? Do you feel unwell?’ I was shocked that that was all they asked.” She noted the travellers all wore masks at every airport they passed through, including Toronto.

“I really thought someone would check temperatures and it makes me scared to know that some people might not take this self-isolation seriously, because it did not seem that airport security was.”

All four travellers are now self-quarantining at their homes.

“None of us are sick, and we have our own quarantine I-message group that includes Sarah for us to communicate and cope with any boredom,” noted Bell.

“Since we were all going to Morocco for a yoga retreat we all plan on doing lots of yoga.”