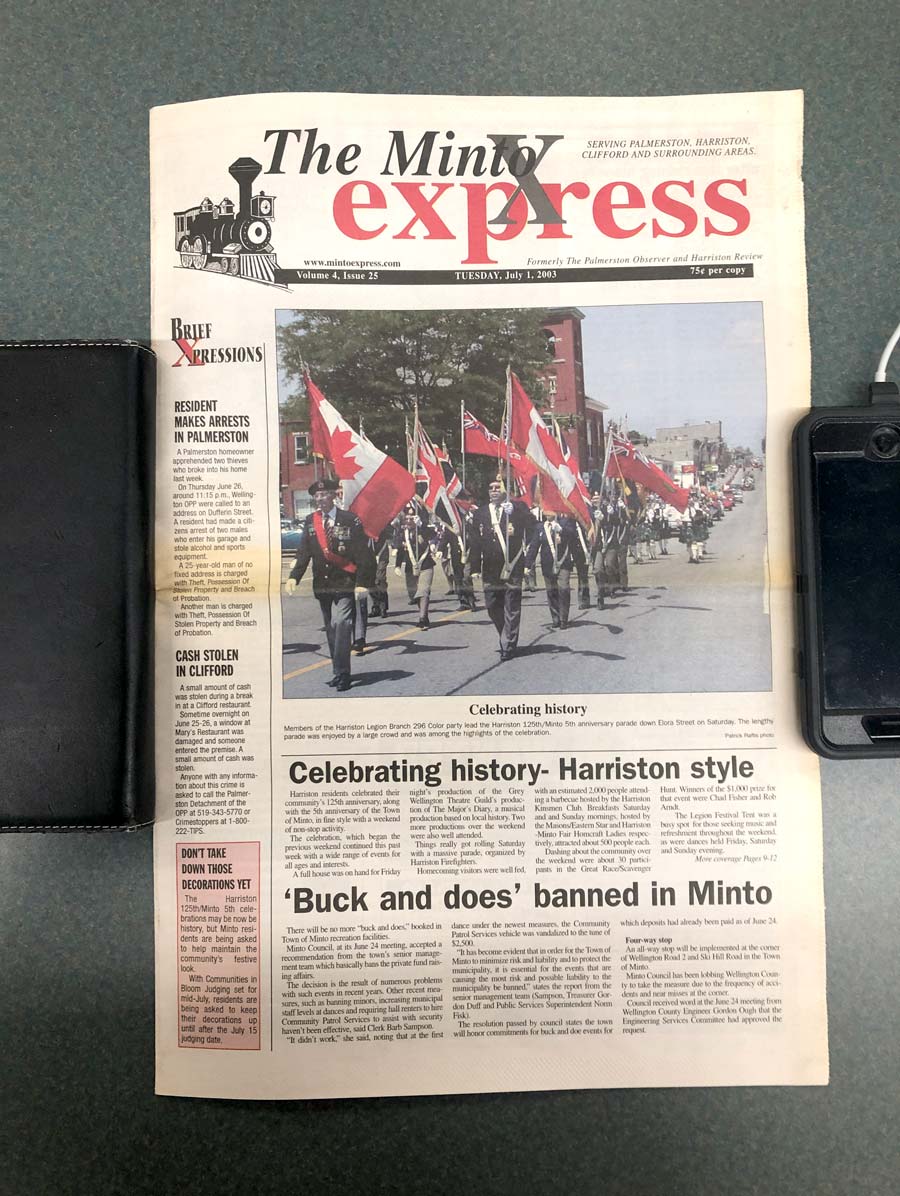 Local news evolution - The Minto Express served the Town of Minto for almost two decades, from 2000 until 2019.

MINTO – The Town of Minto was formed through the amalgamation of the towns of Harriston and Palmerston with the Village of Clifford and the Township of Minto in 1999.

The first newspaper covering the entire municipality, The Minto Express,  was created the following year, when Toronto Star-owned Metroland Printing and Publishing purchased the Palmerston Observer from Laverne Long and the Harriston Review from Clive Williams.

The two papers were merged into one to reflect the amalgamated nature of the Minto community and Paul Teahen was named publisher. At the time he was also publisher of another Metroland paper, the Listowel Banner.

Initially, Metroland maintained offices and staff in Harriston and Palmerston, but consolidated the operation into the Palmerston location within a few years.

In the mid-2010s, in reaction to diminishing subscription and advertising revenue, Metroland merged the Minto Express, along with weekly papers in Mount Forest and Arthur, with the Independent Plus, an existing free circulation paper which covered an area including North Perth (Listowel and area), Minto, Wellington North and Wingham.

The practice of re-plating was discontinued in July of 2019, when newly-formed Midwestern Newspaper Corp. purchased Metroland’s southwestern division, which included: the Independent Plus along with paid circulation papers the Listowel Banner, the Wingham Advance-Times and the Walkerton Herald-Times. The new company also acquired the rights to the legacy newspaper titles including the Minto Express and Mount Forest Confederate.

The archives of legacy newspaper titles like the Minto Express, Arthur Enterprise and Mount Forest Confederate were retained by Adsett.

Harriston had its own newspaper since before Confederation.

In 1864 a newspaper with Harriston Enterprise on the masthead was formed. It lasted until 1869.

The Minto Express, first published in September of 1867 and edited by John Livingston and H.C. Kaye, lasted only a few years.

Then, in 1871, the Dec. 7 edition of the Listowel Banner announced that “Mr. James Young, late editor of the Goderich Signal, is shortly to  start a paper in Harriston to be called the Tribune.” Sometime later in the 1870s, the Tribune was acquired by John Robertson.

Harriston had, for a brief time, two newspapers. On June 20, 1895, a former partner of Robertson’s in the Tribune, E.H. Dewar, started his own newspaper, the Harriston Review. In the ensuing competition, the Tribune lasted only until 1900, ceding to the Review, which continued to serve the community until nearly the end of the 20th century.

Through the 1960s, ‘70s and ‘80s the Review was owned and operated by Joe Akkerhuis, who came to town in the ‘50s and worked initially for the paper’s previous owners. Later, his daughter, Miram, operated the paper, until it was purchased in 1990 by Williams, who also owned the Arthur Enterprise.

In Palmerston the Telegraph began sometime in the 1870s, and persisted into the 1880s.

It was followed by the Palmerston Reporter and the Palmerston Spectator. The Spectator ran into financial difficulties in 1930, and closed down. For a time the town was served with a Palmerston edition of the Clifford Express before that paper failed.

In 1933 the Palmerston Observer moved into the old Spectator office.

Art Carr came to Palmerston in 1934 from Sudbury, working as a reporter and later bought the Observer using funds raised from local business men.

Carr was considered to be one of the pioneers of offset printing in the weekly newspaper business.

He was known for his mentorship of young people in the business of weekly newspapers, including Bill Adsett during his early days at the Community News.

Carr retired in 1977 and sold the paper to Long, who remained at the helm until the sale to Metroland.