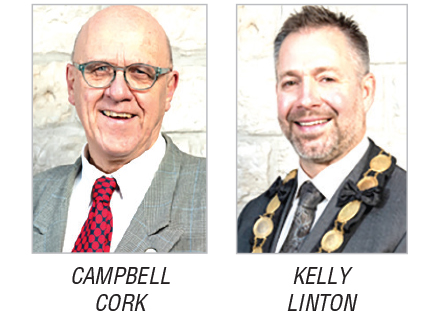 GUELPH – Wellington County council has approved a 2019 budget with a 2.8 per cent increase in the county portion of property taxes.

Factoring in assessment growth, the projected tax impact of 2.8% is equal to about $17 per $100,000 worth of assessment per individual taxpayer.

Council approved the 2019 budget, along with projections in a 10-year capital plan, following considerable debate at the Jan. 31 meeting.

The projected spending includes $60,000 from reserves to fund a strategic planning initiative that Warden Kelly Linton expects will be completed this spring.

Strategic planning direction could well decide the fate of several major initiatives in the budget and 10-year plan, including:

– a proposed “continuum of care” seniors community development, including $1 million for exploratory studies in 2019;

– a concept plan for a $21.1-million expansion of the administration centre in Guelph in 2028; and

– $9 million over 10 years for redevelopment of five ambulance stations in the county.

“As we’re all aware, the continuum of care is our largest project ever, at whatever the price is – $70 million or whatever,” said Cork.

“Before we proceed with these projects I am just uncomfortable without hearing a discussion by council on issues such as whether we want to see our debt rising over the next 10 years despite how much we’re paying off on it, whether we want to embrace more mega projects at this point in our history, where we’re going with the administration centre and whether we want to focus our resources at this

point on our infrastructure deficit and possibly put the brakes on mega projects.”

While noting he believes the proposals are “worthy projects,” Cork stated, “I got a very clear message, and I suspect some of you did also, at the door during the campaign that the public wants to see us put a stop to borrowing, put a stop to mega projects at least ‘till we get our feet back on the ground.

“I think we have to back up and see the big picture and I think this budget addresses that interest squarely. It has set aside money to create a county strategic plan and This will give us an opportunity to see that bigger picture.”

Cork continued, “Once we agree on the strategic plan we’ll be in a position to address the question of the ambulance garages. Do we want to spend that kind of money? Many of the garages are leased now, maybe we don’t need to take on any infrastructure.

“Do we want to mortgage the future of the county with mega projects and big debt? Might we like to embrace public private partnerships to help with these projects and in particular with the continuum of care, possibly Centre Wellington should be our partner?”

Cork stated, “I would like to see these projects deferred until the strategic plan is complete. I need to be assured not just more discussion but that they are on hold until we look at them through the eyes of the strategic plan.”

Linton replied, “I’m not sure what we can do to make it clearer that that’s what we’re going to be doing. I think none of us would be comfortable moving ahead on some of those projects you’ve talked about without having that additional detail.”

The warden added, “You have our commitment that we are going to get together as a council and have a fulsome discussion.”

Councillor Chris White said leaving the projects in the budget and on the 10-year plan allows council the necessary flexibility to pursue, modify or scrap any of the projects going forward.

“It does what you’re asking for,” said White.

While the ambulance and continuum of care projects do impact the 2019 budget, White noted any changes to the administration centre are simply “forward planning.

“That is a broad stroke a decade out,” he explained, noting staff are “just trying to look ahead and say, ‘this is coming’” by including it in the forecast.

“When we put dollars in the budget that’s a pretty solid commitment,” said councillor Andy Lennox. “And what I hear councilor Cork asking for is to put the brakes on some of this until we actually decide what we’re doing.

“We’re fighting against the perception that if you fund it with the budget, you’re going to do it,” said Lennox, who suggested amending the motion to indicate the projects are on hold pending further discussion.

“As much as you say the administration centre is 2028, a long way out, it still has Guelph written on it when we see the 10-year plan. That prejudges it. Already we’re beginning to say yes to a question that we haven’t asked ourselves,” said Cork.

Councillor Doug Breen pointed out some capital money would be spent in areas such as ambulance in 2019 regardless of the decision on the wider project.

“We’re going to need some money for ambulance at some point, so I don’t think it’s much of a risk to put some money into reserves for it,” he stated.

Councillor Gregg Davidson pointed out seconds can make a difference on an ambulance call.

“If our paramedics are closer to where they need to be, centralized, then more lives can be saved. So I am very much in favor of keeping that in the budget,” said Davidson.

On the continuum of care project Davidson pointed out that during a presentation earlier in the meeting, Ed Starrof of SHS Consulting told council that while he expects the development would turn a profit over time, any returns would be “modest at best.”

“If there’s not going to be large profit-making, I don’t think we’re going to get a private company to partner with the county. So then it comes down to do we want to do it? Should we be doing it?” said Davidson.

Councillor Don MacKay noted major projects have in the past been thoroughly discussed prior to approval.

“Were arguing about $1.5 million on a $99 million budget. I agree with you we need to know more. We need that information,” he said. However, “we’ve got a guarantee,” of further discussion through strategic planning sessions.

“I’ve been on this council now going into my third term and we did have those opportunities when we put things in the budget that are beyond year one. We’ve had the opportunity to have good discussion and if we felt that they weren’t going to work then we removed them from the budget.”

Councillor Steve O’Neil was opposed to the inclusion of the stage in the project.

“I don’t believe that it’s necessary. There’s a lovely patio at that library – if you’re going to have any entertainment it should be there,” he stated.

Cork suggested community fundraising could be accessed for a portion of the improvements.

“I would agree with councillor O’Neil … I think we’ve put a ton of money into that project; it’s time for the community to step up,” he said.

“The idea that the county would be getting into the pizza-making business doesn’t seem to ring right to me,” said councillor Dianne Ballantyne.

“This is a discretionary item that the county is doing for the good of its communities,” said White, noting new and restored libraries across the county over the past decade have been designed with community-specific enhancements, including space for a medical clinic in Clifford and a cantilevered deck over the Grand River in Fergus.

Linton noted the ancillary features at the Hillsburgh Library fit in well with county’s agri-food focus.

“The county does an amazing job when it comes to agri-food. We have a commercial kitchen at that library … I think it really fits what the county’s strategic advantage is, and that’s food,” said the warden.

Other elements of the 2019 budget include:

– road projects and facilities over the next ten years, including $24.4 million for replacement of the Arthur, Erin, Brucedale and Harriston public works facilities;

– $1.5 million for a new ambulance station in Erin to improve response times;

– a new 12-hour, seven-day ambulance shift in Fergus to improve response times and an additional supervisor to support to paramedics in the field;

– 49 new spaces in a licensed child care and early learning centre in Erin;

– planning for the closure of Phase I and opening of Phase II at the Riverstown Landfill Site; and

“The 2019 county budget protects our top priorities and includes a capital investment plan that will renew and improve county infrastructure,” states Linton in a county press release.

“This budget also continues to focus on enhancing key county services to all of our residents while providing incentives to encourage new jobs and investment.”

The budget was approved in three motions, due to conflicts declared by councillors White and Jeff Duncan on elements of the human resources budget (White’s daughter works for the county department) and the Hillsburgh library grounds project (Duncan lives near the library).

A motion to approve the 2019 operating budget and capital budget and 2019-2028 ten-year plan, as amended by the land division and economic development committees,  including $60,000 for strategic action plan (with the exception of human resources salaries, Hillsburgh Library grounds improvements and Hillsburgh Library Lookout Trail funding), was approved with only O’Neil opposed. Councillor Mary Lloyd was absent.

A motion to approve the human resources department salaries was approved unopposed, with White abstaining.

A motion to approve the Hillsburgh Library projects was approved with Cork and O’Neil opposed and Duncan abstaining.