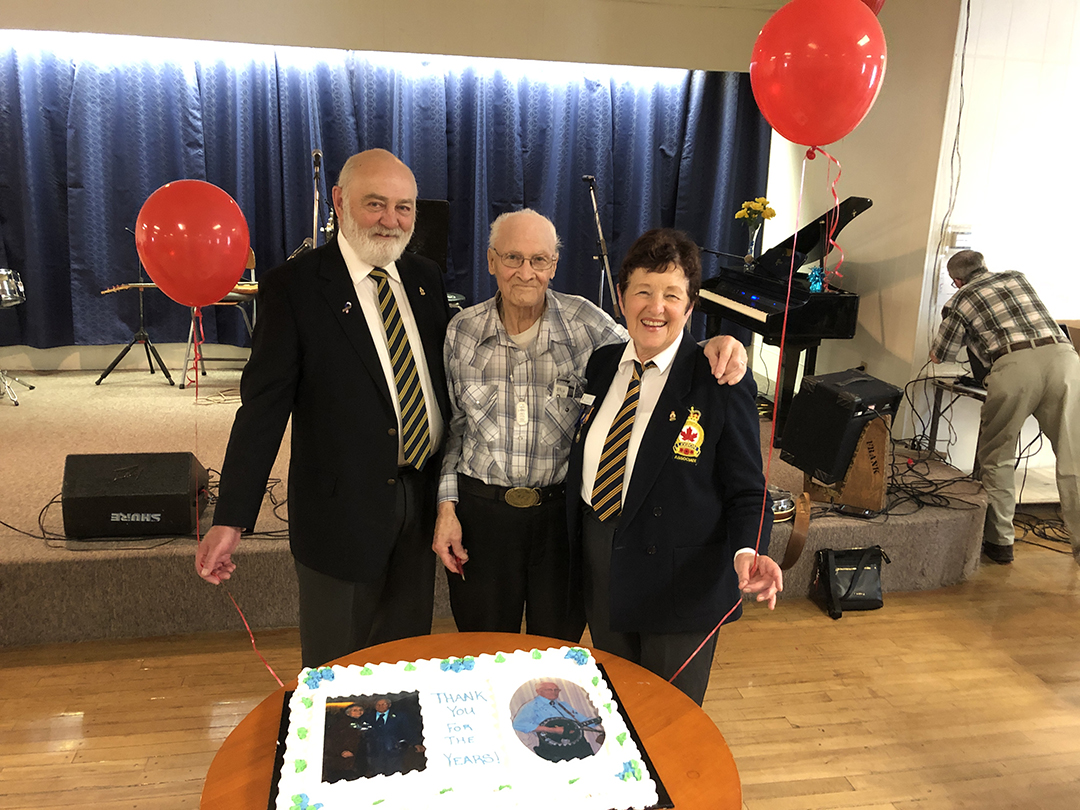 Jamboree organizer - Frank Gilbert was celebrated on May 19 as he stepped back from organizing the old-time music jamborees he helped start at the Harriston Legion branch 32 years ago. From left: past Legion president Terry Fisk, Gilbert, Legion member Judy Tuck. Photos by Patrick Raftis

HARRISTON – After 32 years Frank Gilbert is stepping back from his duties as organizer of the popular musical jamborees held regularly at the Harriston Legion branch.

From fall to spring, the monthly jamborees continue to draw fans of old-time music in large numbers, as they have for the past three decades.

The local jamboree was initiated in the fall of 1987 by Gilbert and local restaurateur Norman “Newt” Lloyd. Frank’s wife, Flo Gilbert, who passed away last August, was also involved in the event from inception.

The events were once so popular people came from long distances, some even from across the border in Buffalo, and organizers often had to turn people away. Today they still often draw crowds of 150 or more from a radius of an hour’s drive, from Wiarton to Waterloo.

The jamborees, which begin at 1pm, are held on the third Sunday afternoon each month from October to May, with the exception of December.

In recognition of Gilbert’s contribution, the music was halted at the May 19 jamboree long enough to cut a cake and pay tribute to the event’s originator.

Asked if he originally imagined the event would last this long, Gilbert replied, “I didn’t think I would.”

Noting he made many friends through the jamborees over the years, Gilbert said, “I’ve enjoyed every minute.

“You can’t find this kind of music everywhere – and good will – these people are just the best you could find anywhere,” he stated.

“You did a great job Frank. Thanks a lot,” said Harriston Legion branch president Ken Reuber.

Past Legion president Terry Fisk said the jamborees are among the branch’s major fundraisers.

“It takes a lot of work and a lot of money to keep places like this open and Frank’s been contributing for 32 years and helping us keep the doors open and providing you people with the entertainment on your jamboree days,” said Fisk.

“Without people like Frank, I can tell you honestly this branch probably wouldn’t be open today.”

“I would ask that you continue to support Laverne and the musicians and keep coming,” Fisk urged.