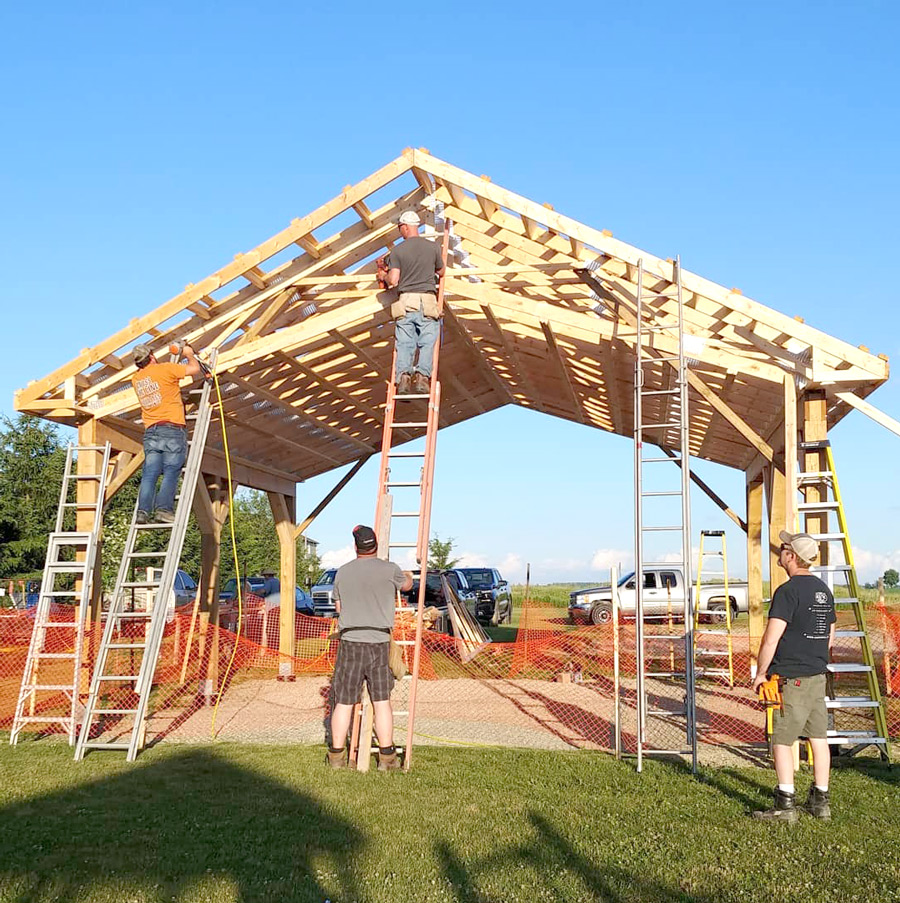 Still serving - Members of the Drayton Kinsmen Club have been striving to serve their community’s greatest needs despite restrictions imposed in response to the COVID-19 pandemic. Club members have been busy building shade shelters at two local parks, while recognizing the need for physical distancing. Submitted photos

DRAYTON –  The strength of local service clubs is one way to measure the heartbeat of any small rural community.

In normal times, clubs find ways to improve their communities by bringing them together – for fundraisers, work parties and special events.

That’s been a greater challenge since restrictions to stop the spread of COVID-19 were implemented in March, forcing clubs to become creative in order to get things done.

Just before the COVID-19 pandemic began, The Drayton Kinsmen, in celebration of 100 years of Kin in Canada, posed a challenge, offering $100 to every young person who wanted to make the local community a better place to live.

Applications were circulated through local schools and a few applications came in before the pandemic started and province-wide restrictions forced students to stay home from school and while service groups were advised not to meet.

On Sept. 17, the Drayton Kinsmen announced $100 cheques would be provided to the following applicants:

“Now that the students are back to school and the Kinsmen are meeting again, we will be accepting applications until the end of 2020,” club officials note.

“If you have an idea that would make our community better, please ask your teacher to send us a message for a Kin 100 community application or send us a email draytonkinsmen@gmail.com.”

Kinsmen officials note club members have been working behind the scenes throughout the pandemic, having been advised by public health and the club’s own national leadership not to meet.

One early effort was spending a couple of hours handing out toilet paper, from a safe physical distance, at the main intersection in Drayton. 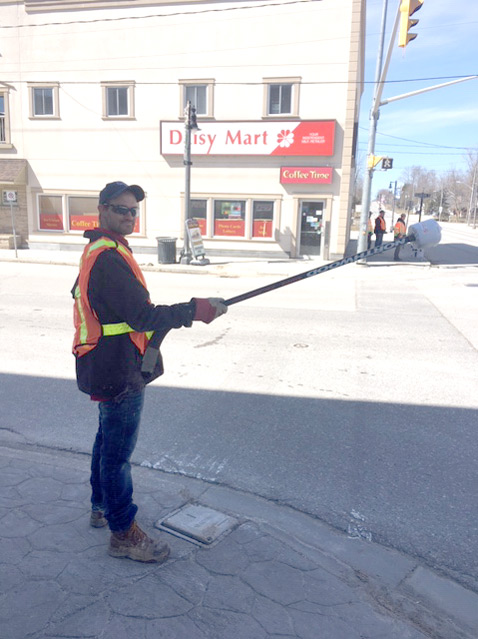 During the early days of the COVID-19 pandemic, when a toilet paper shortage was among the side effects, Drayton Kinsmen members pitched in and lightened the mood by passing out rolls downtown.

Club officials said the idea was “to lighten the mood in some uncertain times during the first stages.”

When a local citizen suggested it would be great to see seniors who were not able to see any visitors hook up with the youth of the community and began a card and letter campaign,  “the Kinsmen were more than happy to support them with any craft supplies/ cards envelopes that they needed,” club officials state.

When Wellington-Dufferin-Guelph Public Health made the decision that everyone must wear a mask when entering businesses, Drayton Kinsmen handed out 500 masks to local businesses so they didn’t have to turn customers away.

“Our community was the first and had little time to prepare. Some of our members took turns assisting our local grocery store making deliveries to area residences and helped with sanitation and monitoring of their patrons,” club officials point out.

Likewise the need for masks, face shields and other safety measures didn’t stop club members from helping out by running a food booth at a local cancer fundraiser, the Shine Your Light Sunflower Tour at the farm of Matt and Leona Ottens near Moorefield on Aug. 15 and 16.

The Drayton Kinsmen’s work has continued throughout the pandemic with projects such as building shade shelters at Kinsmen Park and ABC Park.

“Although at a little slower pace as we still had to safe distance,” club members note.

“That stalled out a little bit because we’ve been doing a lot of the work ourselves and haven’t been able to be together until fairly recently. But they’re starting to take shape,” said vice-president Craig Frere in a Sept. 25 interview.

Frere says the biggest challenge the club has faced has been “for months not being able to be together.

“We did some meeting on Zoom but we couldn’t meet face to face.”

Fundraising has been another major challenge during the pandemic, with the club forced to cancel its major annual event, the Drayton Kinsmen Farm Show in March.

“The farm show is our biggest fundraiser of the year and so we were not able to have that this year,” notes Frere.

“We’re starting to plan for next year, but realistically we’re expecting we may not have one next year either.

“So that’s a major challenge because that’s our most significant fundraiser of the year and that’s where most of our money for different community service projects comes from,” he explained.

“Despite that, the club has been strong,” Frere added.

“We continue to communicate and since we have been able to meet together with social distancing in a place in the last number of weeks there’s just been a real good spirt of being able to be together again and continuing to work and to talk about what the community’s greatest need is and how we can start to meet those needs again.”

Any resident of Mapleton Township who wants to join an organization “that truly wants to make Mapleton a better place to live,” is invited to contact the club through its Facebook page or send an email to draytonkinsmen@gmail.com.