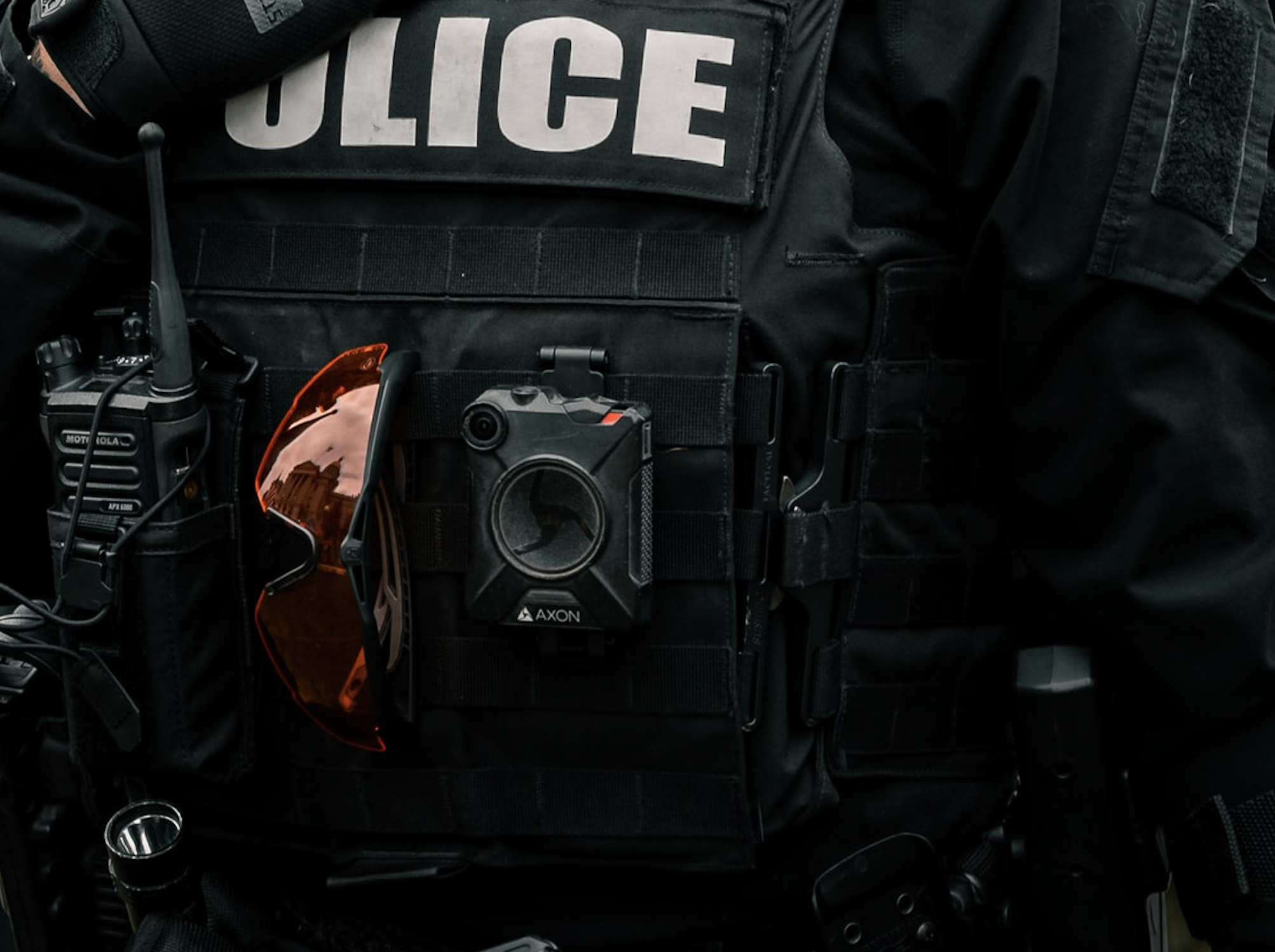 The OPP is using 100 Axon Body 3 cameras worn by officers during a one-year evaluation study. Police say body-worn cameras will be used to gather evidence and build trust and transparency between police and the public while holding both accountable. (Unsplash image)

WELLINGTON COUNTY – They’re watching out of car windshields, suspended from the ceilings of shopping malls, embedded into self-checkouts, peering out into your neighbourhood from doorbells, and they’re in practically everyone’s pocket, on cell phones, ready to be deployed with the swipe of a finger.

Cameras are seemingly everywhere and, in Wellington County, there are plans for them to appear on local police officers.

On Sept. 8, Wellington OPP inspector Paul Richardson announced during a Police Services Board meeting that officers will be outfitted with body-worn cameras over the next two years.

At a time when society is reckoning with the role of police with movements like Black Lives Matter; calls to better allocate money away from policing, into services better suited to address society’s ills; and the Aug. 15 police shooting death of a 31-year-old Fergus man struggling with mental health issues, agencies like the OPP are claiming cameras will usher in more trust, transparency, and accountability between police and the public.

Inspector Richardson’s announcement was met with little response from the board last month and the Advertiser arranged an interview with OPP officials to get an idea of what the rollout of body-worn cameras will look like.

Seated around a lengthy boardroom table inside the Wellington OPP detachment in Aboyne on Sept. 29 were inspector Richardson, staff sergeants Steve Thomas and Dean Korn, and media staffers Cheri Rockefeller and Josh Cunningham.

‘A picture tells a thousand words’

The provincial police agency is currently evaluating body-worn cameras at different detachments in a year-long study across the province.

“We’re doing an evaluation of the body cameras and how they work for us as an organization,” Richardson said.

In the OPP’s West Region, uniformed officers in Haldimand and members of the region’s emergency response and Traffic Incident Management Enforcement teams are currently equipped with body-worn cameras.

The OPP is using Axon Body 3 cameras, promoted by the manufacturer as a “rugged communications beacon” with low-light performance, reduced motion blur, four microphones, artificial intelligence, livestreaming and video recall in the event of “late or non-activation.”

Richardson couldn’t speak to the cost of the cameras, saying that would be determined at a provincial level, but assured “there will be no extra cost to the county” related to the cameras.

Started in May, the OPP’s year-long evaluation—the findings of which won’t be made public—will determine future rollout of cameras.

Richardson previously indicated everyday officers could be wearing the cameras within the next two years.

“We always want to embrace technology, and that technology is going to encourage transparency and accountability within policing, and those are things that we’re always trying to offer to our public,” he said of the move to outfit officers with cameras.

Officials repeatedly referred to the cameras as a tool to gather evidence and build trust.

“I would say that a picture tells a thousand words,” Richardson said.

What will be recorded?

When a body camera is activated, three outward-facing lights will indicate recording.

Police are expected to advise the public when they are being recorded.

But Richardson said there are times when “things happen quickly in policing, and there isn’t that opportunity.” 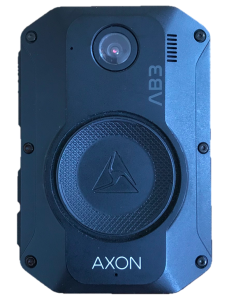 The Axon Body 3 camera is pictured above. The OPP is using 100 of the body-worn cameras for a one-year evaluation study. While activated, three outward-facing and customizable lights will be illuminated unless the camera is in what the manufacturer calls “stealth mode” in which case there will be no indication of recording.

The OPP does have a policy for body-worn cameras addressing recording in private and public places, video retention and security and supervisor responsibilities.

Officers will have “room for discretion” for activating cameras but Richardson said he has “confidence” in officers’ choices.

“There’s no such thing as ‘period, across the board’ in policing because everything we do, it’s nuanced, every situation is different, but in generalities, if they’re involved in a call for service they’re going to be activated,” he said of the cameras.

Asked if officers would be held to account with the policy surrounding cameras, Richardson did not directly answer the question and responded, in part, by saying “our officers are always subject to oversight.”

How much of a say the public has in being recorded depends on where they are and current circumstances.

When in public settings people are “generally subject to the body-worn camera being activated,” Richardson said.

Police may continue recording in public despite objections, according to policy excerpts provided through email, but the policy also states “a uniform member shall be mindful that the public has a reasonable, albeit diminished expectation of privacy in public spaces.”

Where people reasonably expect privacy, like in their homes, residents can decline to be recorded unless the recording is being made for an arrest, or during a search of a residence or person “where public or officer is at risk.”

Recording in private spaces like residences, schools and religious places, can also occur “as long as legal authority exists and is documented” and in circumstances calling for recording, like when authorized by a warrant.

Cameras would typically be deactivated once a call is completed.

At the end of an officer’s shift, the camera would be plugged into a terminal and the footage uploaded automatically to a Canadian-based server.

It’s not yet determined how long video footage would be stored or kept.

Video is viewable live at the time of recording, by the recording officer, on their OPP-issued cell phone and uploaded footage is later viewable by the officer and a supervisor. The crown attorney’s office will also have access for court proceedings. 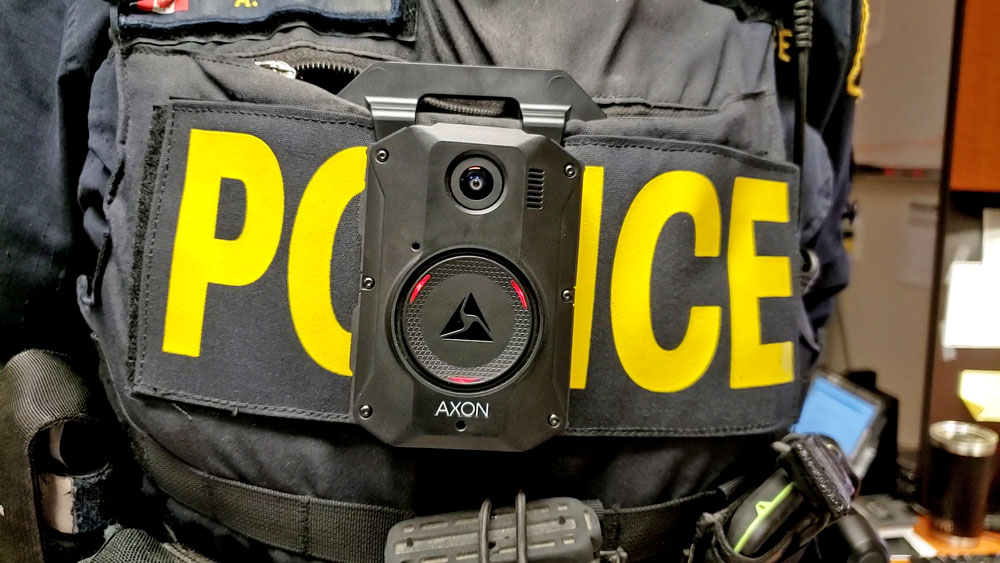 The Axon Body 3 body-worn camera seen on an OPP member. While activated, three outward-facing and customizable lights will be illuminated unless the camera is in what the manufacturer calls “stealth mode” in which case there will be no indication of recording. (Supplied image)

Only the OPP’s Orillia-based Technical Disclosure Unit staff are permitted to edit footage.

Members of the public captured in camera footage but not directly involved in a call will have identifiable features removed; however, an unaltered version will still be preserved.

Asked about anticipated reaction to body-worn cameras from the community, Richardson said he really isn’t sure.

The “majority” of the people police deal with, the inspector said, are compliant and respectful.

As for officers, Richardson said he believes they’ll respond well to the change and he doesn’t think a camera’s presence will change how officers behave or perform.

“I’m just waiting for the evaluation and the study across the province,” he said.

Richardson views the cameras as “just another evolution” in policing. “Policing is constantly evolving.”