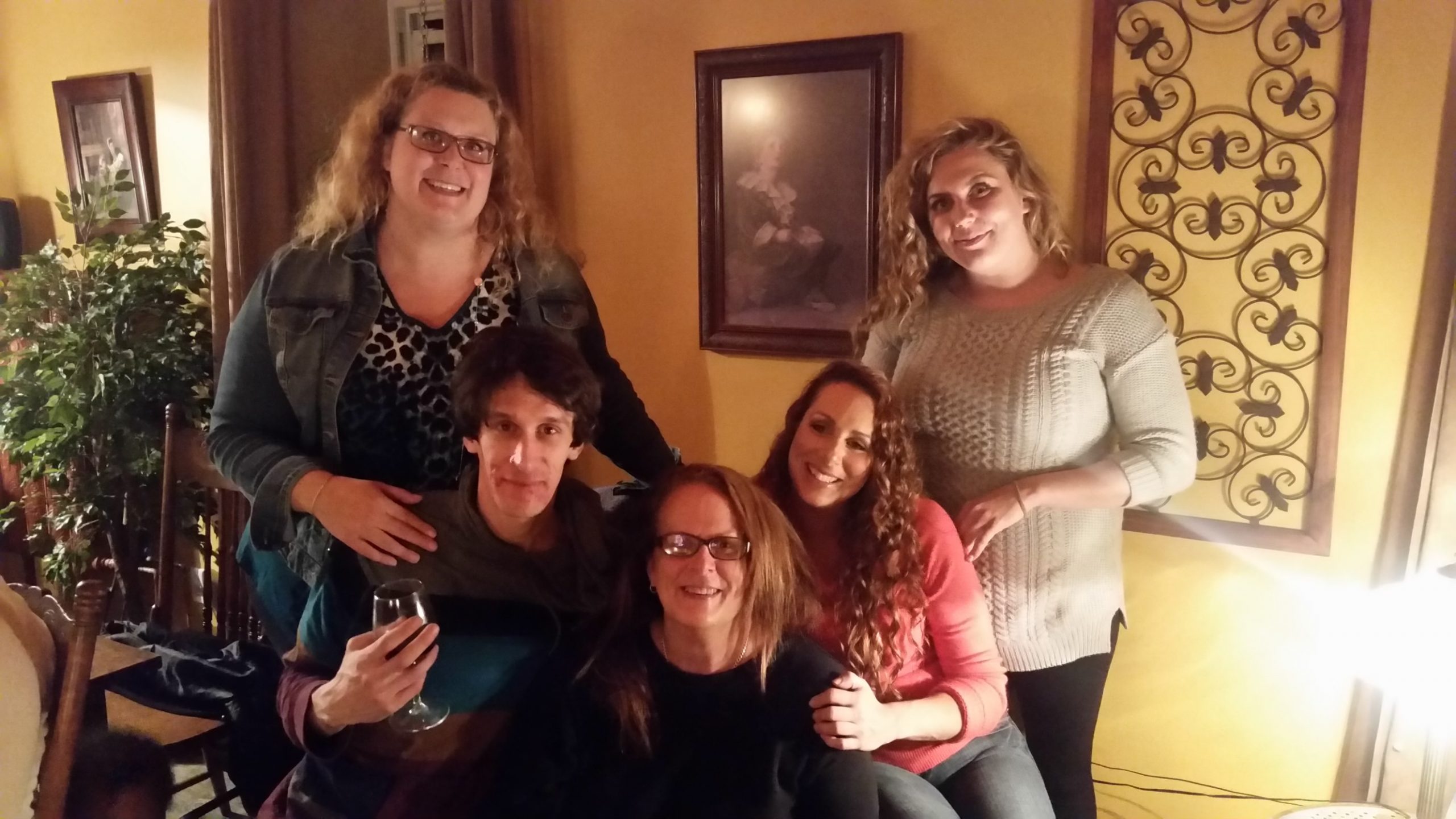 Mathias Bunyan is seen in this photo submitted by his family. Bunyan's life was cut short in a police shooting on Aug. 15 in Fergus. He was 31. From left: Kimberley, Mathias Bunyan, Sandra Bunyan, Rachel Labrie, Alysha Bunyan. (Submitted photo)

FERGUS – The family of Mathias Bunyan, the 31-year-old Fergus man shot and killed by Wellington OPP on Aug. 15, has been left in the dark about what transpired on that fateful Sunday.

“I was outside with my daughter, my sister phoned me around 4:30 that afternoon, on Sunday, she was hysterically crying,” Rachel Labrie told the Advertiser in an Aug. 24 phone interview.

“So, I opened it and started reading all these comments, all these nasty things and I just got this sick feeling in my stomach,” Alysha said.

“It was his address, it was just the things that transpired within the week with him being put into the hospital … I don’t know how to explain it, it was just this feeling,” she recounted.

The Facebook post had hundreds of comments at the time, according to Alysha, talking about a shooting at the building where Mathias lived: 175 Belsyde Avenue. Alysha asked Rachel to call 911.

Fearing the worst, Rachel says she dialed 911, expressing to a call-taker her concerns about what was going on at the apartment and the sisters’ hunch.

But without any information provided, Alysha made the quick drive over to the apartment building where their brother had lived for around a decade. 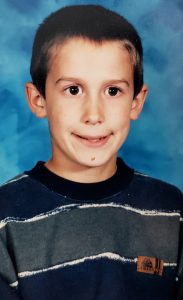 “We feared that this would happen, and it literally happened 24 hours before we were able to take him to hospital,” Rachel said.

The family had been preparing an intervention for their brother with the hope he would be held involuntarily on a 72-hour hold for an emergency psychiatric assessment.

Mathias’ mental health had declined over the past two years, the sisters said, starting when a 15 year-long relationship came to end.

The sisters told of a sibling who became increasingly isolated as major life changes bore down.

He had announced to his family he no longer identified as the Mathias they once knew—he was beginning to transition and now identified as a woman. He also eventually lost his job working the nightshift at the Fergus Zehrs—a role he held for at least 13 years.

Alysha described her brother as a humble, quiet and lovable person. Rachel called him “eccentric.”

Elyse Kelly, a long-time friend of Mathias, said in part, in a Facebook post, “Mathias was gentle. He gave soft hugs and tended to his pets with the love, care and concern of a parent … the confusion and the darkness was not Mathias.”

The man they all knew painted his nails, loved grunge bands like Nirvana and Tool, but would also move to electronic dance music or polka music.

“He would go to dance parties and stuff and just dance his little heart out and then he would get his bass guitar with all this flannel and just like rock right out,” Rachel recalled.

Mathias taught one of Rachel’s sons how to play bass guitar, had a talent for art, an interest in science and enjoyed nature.

“He didn’t care what you looked like, what you wore, he didn’t judge you for that stuff—he liked you for who you are and looked past all of that,” Kimberley said, also describing her brother as “eccentric.”

“He was not society’s norm,” she said.

In respite from a grief and tear-filled interview, the sisters laughed as they recalled their younger years with their brother. 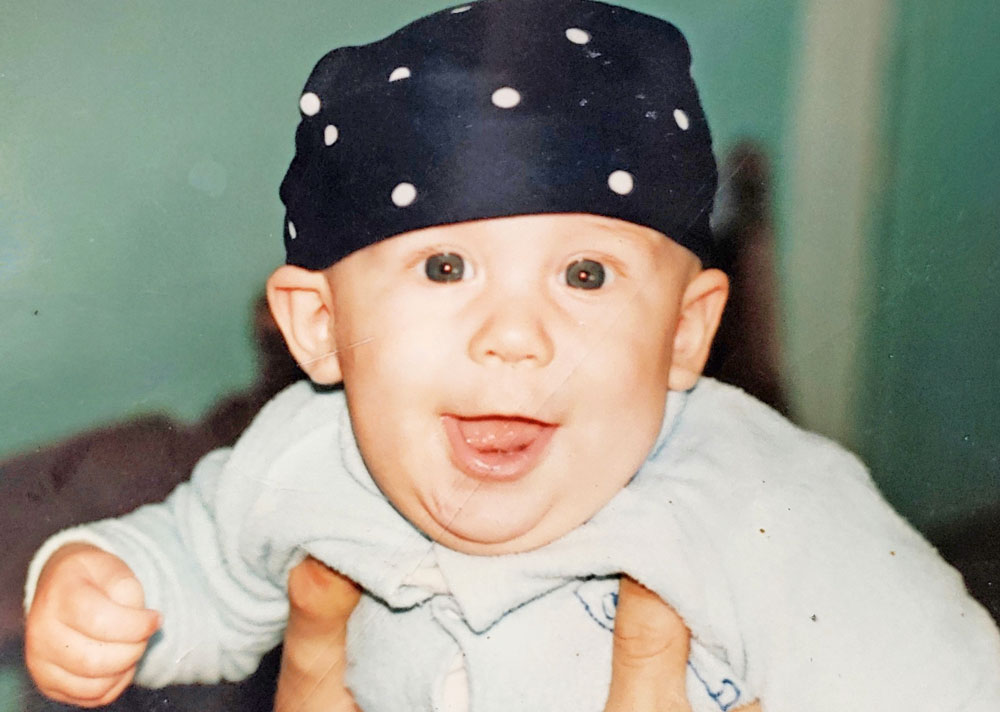 Alysha is the youngest of the three sisters and closest in age to Mathias, attending St. Joseph elementary school and Centre Wellington District High School together while growing up in Fergus.

The older sisters, Kimberley (who asked not to be identified by her last name) and Rachel, grew up in Toronto. Rachel later moved to Fergus and Kimberley to Brampton.

As a child, Mathias would wear a dinosaur mask and a red and white striped towel as a cape over a batman shirt and rubber boots on his feet.

“You couldn’t go anywhere unless he had this outfit on,” Rachel remarked. “He was a very happy kid.”

It was only in the last two years where the family, including their mother who frequently visited Mathias, noticed his cognitive decline. In the last year, Alysha said he “torpedoed severely.”

Mathias began exhibiting bizarre behaviour, talking and referring to himself in the third person, speaking like he was someone else.

Texts from Mathias would arrive, she said, with messages like: “blue, green, the sky turn purple, animal outside, orange night, dark demon, open mouth, scares me, has no teeth, none has eyes, go to the west side, don’t go to the east side.”

“It was like you were given a 5,000-piece puzzle without the picture,” she said. “Nothing made sense.”

He looked ashen and exhausted, Alysha recalled, explaining he had developed severe insomnia and was terrified of sleeping, fearing he would die.

The family suspected he was suffering from a schizophrenia-like, undiagnosed mental illness.

“Whatever it was, my brother didn’t think he was sick,” Kimberley said, adding her brother believed “the world was the issue.”

“As a family we’re frustrated because I know some people have questions; I’ve seen nasty comments in the news and different things like saying, ‘Oh, well, it’s the family’s fault, they should have dealt with this sooner,’” Rachel said.

“We’ve been dealing [with] this ongoing, as a family, trying our best to understand Mathias,” Rachel said. “We tried, as a family, all together to help him.” 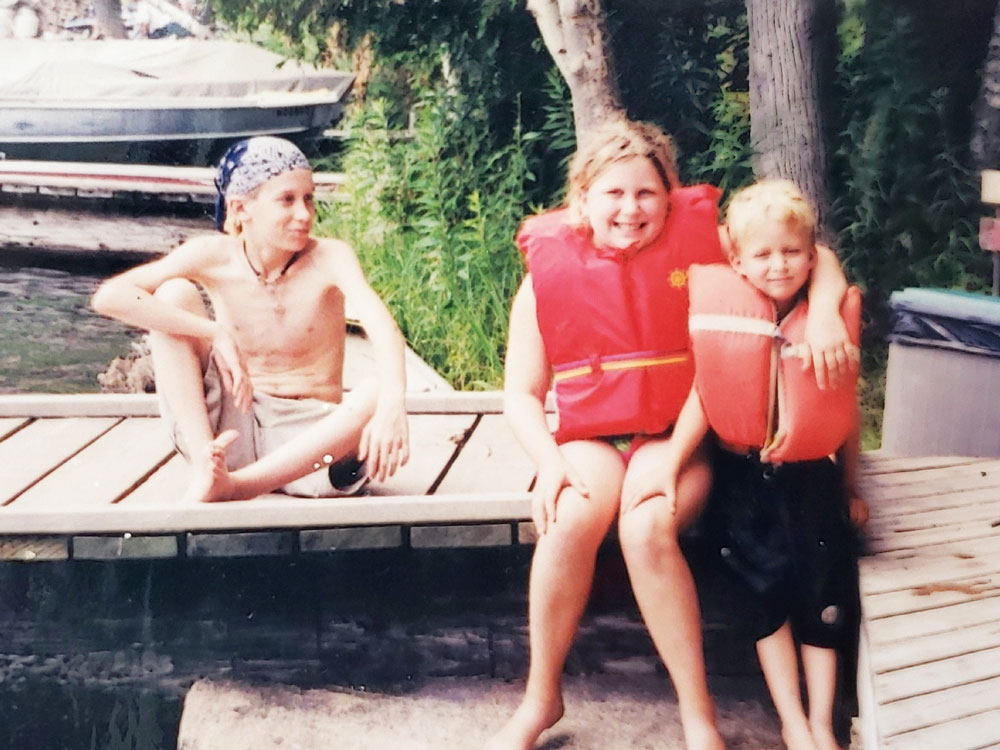 From left to right: Mathias Bunyan, 6; sister Alysha Bunyan, 9; and Mathias’ nephew Riley, 4; sit on the dock at Bass Lake at the family trailer park in the Bruce Peninsula. (Submitted photo)

“As this progressed and we tried to get him help, he was getting more strong in his words and … we did take a step back, but it wasn’t that we weren’t discussing him as a family,” Kimberley said. “But because he’s a 31-year-old man, there’s only so much we could do.”

Simply getting Mathias to a doctor’s appointment proved an ordeal.

“So, you can picture me chasing this beautiful, tall, skinny, young man wearing a bright, pink miniskirt,” Alysha said. “It was a weekly, regular occurrence. This has been my life, our life, for the last two years.”

Around four days before his death, Mathias knocked at the door of his childhood home in Fergus, now a daycare, where he had lived with Alysha, their mother and their then stepfather. A person opened the door at the daycare to a disoriented Mathias, behaving hysterically and asking for help.

The Advertiser spoke with the person who had answered the door to Mathias, and who asked not to be identified in this story.

Mathias was switching rapidly between different personalities and at one point ended up balled-up on the ground, crying.

Police were called and Mathias sat in a cruiser without issue, according to the person. According to his family, Mathias ended up at Groves hospital where he discharged himself the following morning.

“We finally all said like ‘this is enough, we can’t keep doing this anymore,’” Rachel said of the hospital visit. “That was the rock bottom for us.”

Before, Mathias had visited or called Alysha every day.

But by that point, he had stopped socializing, isolating himself and pulling away from the typically tight-knit family.

‘We do just want the truth’

The account of events on Aug. 15, as told by the Special Investigations Unit – the police oversight body called in to investigate police actions like when a gun is fired at someone – tells a vague story of police responding to a “domestic disturbance” at 11am, later resulting in the shooting death of Mathias by police at 1:38pm after a period of negotiating and the firing of a “conductive energy weapon.”

But details of what exactly transpired between 11am and 1:38pm are only known to police and the SIU investigators now looking into the actions of police that day. Both agencies remain tight-lipped about what happened.

The family disputes the SIU’s official account as characterized in an Aug. 15 press release and an email, reported on by news media, including the Advertiser, stating police responded to a “domestic disturbance” involving Mathias who was said to be armed with knives, and that an officer was “seriously injured.”

“The picture of Mathias is this knife-wielding criminal, which he was not; he had [a] mental illness, he was sick,” Kimberley stressed. 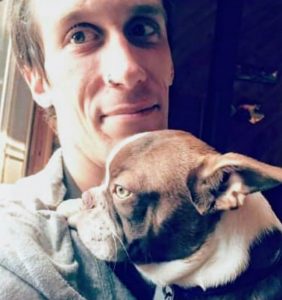 Mathias Bunyan is seen with Forest, one of his dogs. (Submitted photo)

The family have filed a formal complaint with the SIU about the release of information. The family have also launched a GoFundMe page to raise funds for a lawyer and legal fees.

“We’re both very, very discouraged with how the system works,” Rachel said. “It’s just superfluous words being used to pat you on the back to make you feel better.

“I’m not going to be naive enough to say that there couldn’t be some things that we’re going to find out that may be very hurtful or [saddening] to us, but we do just want the truth,” Rachel went on to say.

“Our whole family is in the dark right now.”

‘So it doesn’t come to this point’

“We have to put more funding into mental health awareness, mental health workers, people who are trained to work for the police, to be the ones that are at the scene of these things to de-escalate … so it doesn’t come to this point,” Rachel said.

She believes if the “proper people” would have been present, Mathias would be alive today.

Kimberley expressed bewilderment that her brother was shot multiple times.

“No bullets are acceptable; you send in the right people,” she said, wishing there were more resources for families to turn for help.

“Do I have a lot of faith in our system? No, because if I did have faith in the system, my brother would be laying in a bed, getting care, and not be dead,” Kimberley said.

“There’s so many unanswered questions that we will never get an answer to and I think that’s what we’re struggling the most with,” Rachel said.

Despite the traumatic end to their brother’s life, their lives continue on.

Kimberley said she feels as though she’s “walking in a cloud, in a nightmare.”

The other sisters say they are left angry, distraught, confused and lost; stumbling through the uncharted murkiness of fresh grief, bearing their anguish to reporters, handling the daunting mound of end-of-life paperwork, and trying to reconcile the sharp absence of their brother, all while continuing to parent young children.

“We still have to smile and play games and do things where you feel like laying down and closing your eyes and having yourself a good cry,” Rachel said.

On Aug. 19, the sisters were at last permitted to view their brother’s body. 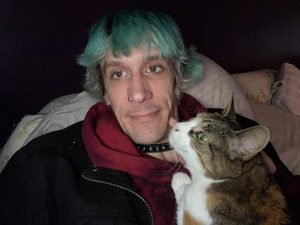 “We had a private viewing with our own family, sitting with him for a couple of hours, talking to him, expressing our feelings of sadness, asking him to forgive us if we could have helped him sooner, telling him that we loved him, wishing that he was in a better place, hoping that he felt loved and safe now and didn’t feel so lost,” Rachel said.

Mathias’ body was cremated on Aug. 23 and although he has been reduced to ash, the women maintain they’ll continue advocating for their brother in life.

The women hope that by speaking out, other families won’t have to live through their nightmare.

“Bottom line is my brother’s gone and can never speak up and we’re speaking for him,” Rachel said.

“Be that voice that they don’t have … if you think there’s a problem, open up that discussion and talk about it,” Kimberley said.

“We couldn’t save him, but we’re going to save others—or at least try.”