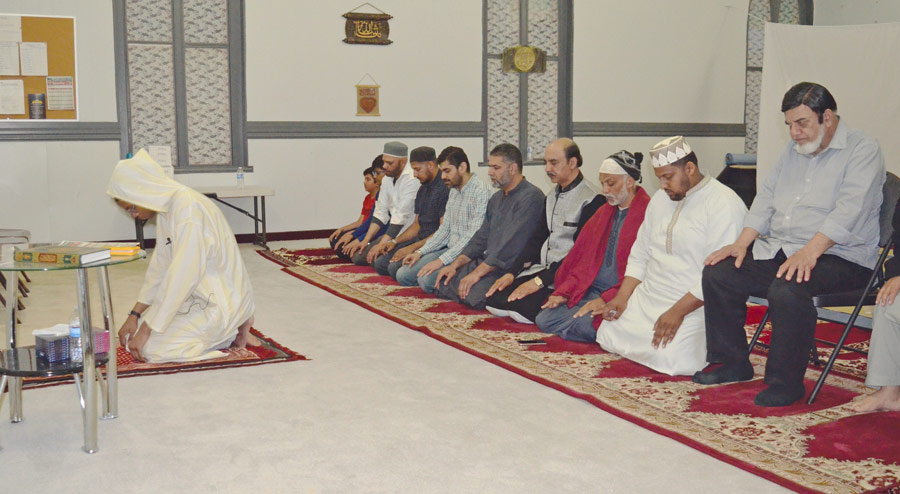 Place of prayer - Members of the new mosque at the Maghrib prayer, the fourth in the daily Islamic cycle, under the leadership of Imam Tayyab Muhammed. This followed the breaking of the fast during Ramadan. Photos by Phil Gravelle

ERIN – Wellington County’s first mosque has been established in the village of Erin, designed to serve the needs of Muslims throughout the district.

The mosque and cultural centre are located in the historic Disciples Church building at 103 Main Street, close to McMillan Park.

Jummah congregational prayers are held every Friday at 2:30pm, under the leadership of Imam Tayyab Muhammed of Guelph.

Erin Mayor Allan Alls and some local Christian pastors recently attended an open house at the mosque, welcoming the faith community to town.

While there are relatively few Muslims living in Erin, the facility is intended to provide a convenient location for those living in the region between existing mosques in Orangeville and Guelph.

The church was built in 1873, originally as a Church of Christ Disciples.

The congregation included many of the pioneers of the village, who had met in the hall over the Clark House drive shed (40 Main Street) before the church was built.

The building was more recently the home of Erin Village Alliance Church. The church rented the facility, and when the building went up for sale, it moved to the nearby Burns Presbyterian Church.

The Burns congregation had moved to Hillsburgh, merging with members of St. Andrews Presbyterian.

The church at 103 Main was purchased by Kashif Ali, who also operates Erin Diagnostic Imaging at 2 Thompson Crescent.

“I love this town,” said Ali, who decided to maintain the building as a place of worship.

“We help the needy – whoever is in need, not just Muslims,” said board member Alam Mohammed.

The Erin mosque is affiliated with IIPC Canada, and is open to all Muslims. 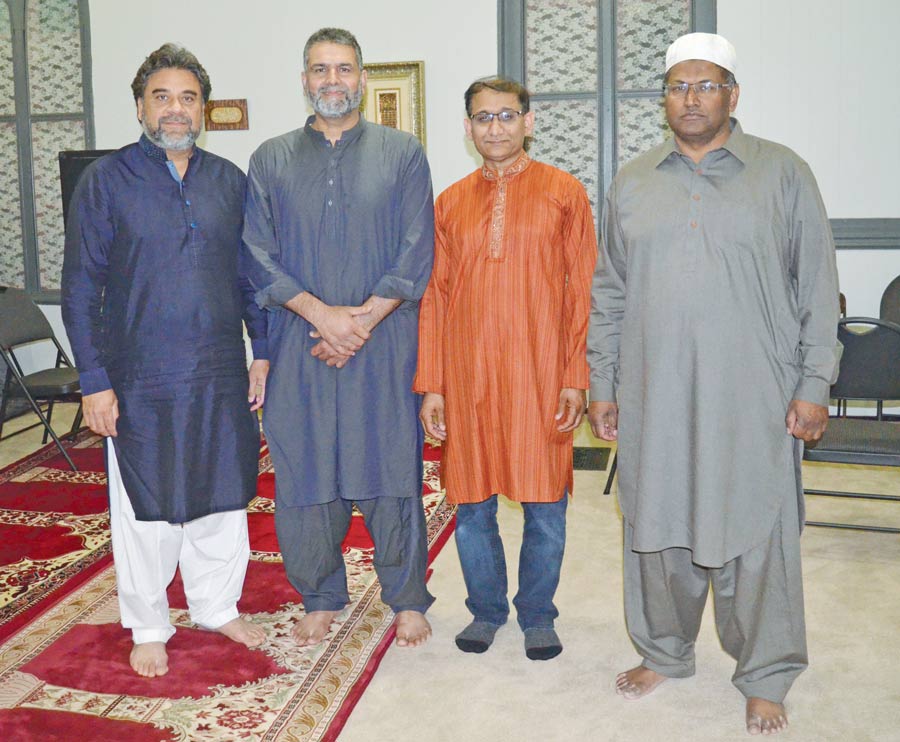 Place of prayer – Members of the new mosque at the Maghrib prayer, the fourth in the daily Islamic cycle, under the leadership of Imam Tayyab Muhammed. This followed the breaking of the fast during Ramadan. Four members of the board for the Erin centre, from left: Mirza Munir Ahmed, Alam Mohammed, Syed Kashif Ali and Mirza Imran Baig.

Its members recently completed observation of Ramadan, the annual  commemoration of the first revelation of the Quran, Islam’s holy text, to the Prophet Muhammad.

Ramadan lasts 29 to 30 days, this year from May 6 to June 4, from one sighting of the crescent moon to the next. During this period of fasting, Muslims refrain from food and drink between dawn and sunset. They practice self-discipline and devote themselves to prayer, reciting the Quran and to charitable work.

Muslims pray facing east, toward the holy city of Mecca in Saudi Arabia, the birthplace of the Prophet Muhammad.

There is a schedule with five sessions of prayer each day. The language of prayer is Arabic, regardless of worshipers’ daily language.

The Erin mosque follows a tradition in which women and men assemble separately for prayer and many social activities, with men assigned a more public role. Women enter by a separate door, and are behind a screen during prayers. Alam Mohammed said this is not required by Islamic law, but it is a custom that enables comfort and modesty.

The Islamic faith teaches that there is one God (Allah in Arabic) and that Muhammad is God’s messenger. It incorporates elements of Jewish and Christian scripture and tradition, and recognizes Adam, Abraham, Moses and Jesus as prophets. As of 2015 there were about 1.8 billion Muslims worldwide, about 24% of the world’s population, and growing.