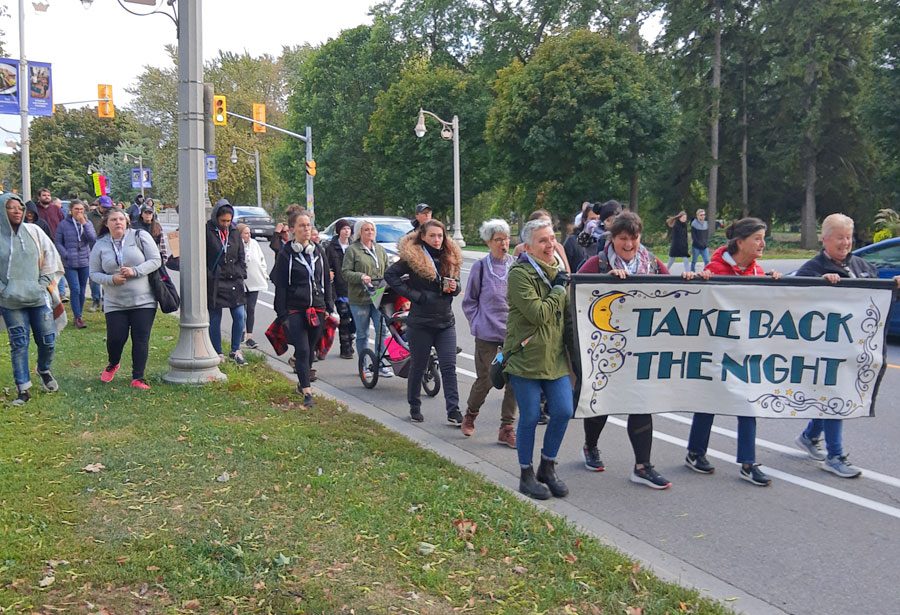 Guelph-Wellington Women in Crisis hosted the annual Take Back the Night march on Sept. 22. Photo by Joanne Shuttleworth

GUELPH – The annual Take Back the Night march usually focuses on safety for women and marginalized people, but this year, in the aftermath of the reversal of Roe vs. Wade in the United States, officials talked about gender equality and bodily autonomy for everyone.

“We take comfort in Canada, but there are other barriers to abortion and reproductive care here, too.”

Potvin said there is stigma around abortion in Canada and access is not equitable across the country or even across this province.

She said some people can accept abortion when a pregnancy endangers someone’s life or in cases of rape.

But the right to an abortion “should not rest on the reasons why,” she said. 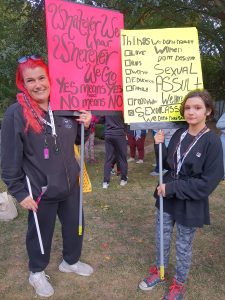 Robyn Connolly, left, has been bringing her 10-year-old daughter Nyiah to the march since she was five. Nyiah says it makes her feel proud to take part. Photo by Joanne Shuttleworth

And on the flip side, everyone should have the right to have children and parent them with equity and safety, she said.

“The forced sterilization of Indigenous women should not have happened,” she said.

About 50 people came out on Sept. 22 and marched from Marianne’s Park to St. George’s Square in Guelph in the chill of the early evening.

They chanted things like “Break the silence, no more violence” and “Claim our bodies, claim our rights. Take a stand, take back the night.”

Potvin’s message resonated with Robyn Connolly, who regularly attends the march and has brought her daughter Nyiah, now 10, to the march for the past five years.

Connolly said she marches for safety and solidarity and being with like-minded people.

And she started bringing her daughter so she too can open her eyes to the dangers women face and the battles for equality and equity that are still being fought.

When Nyiah was five, “it was all I could do to stop her from leading the march,” Robyn said.

This year Nyiah made her own sign to carry.

“We hope the march empowers you to go back in the world feeling like real systemic change can happen,” said Women in Crisis public educator Cindy McMann, who organized the event.

“The road to human rights is not a one-way street. We’ve seen how they can give and take away our rights.”