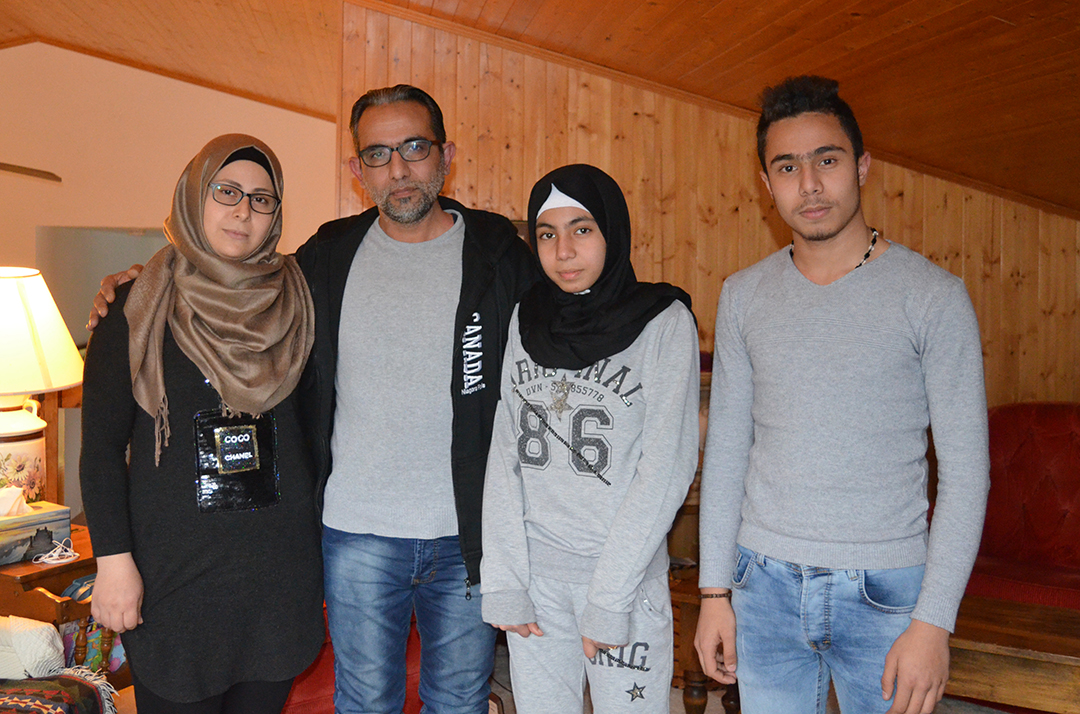 Hizan family - Souzan and Mohamad with their children Asmaa, 13 and Aref, 17. Photo by Phil Gravelle

ERIN – After years of instability while fleeing war in Syria, the Hizan family has found a safe refuge in the Erin countryside.

This is the second family sponsored by Erin Refugee Action, and the group is raising money to support a third.

Through a sponsorship agreement with the federal government, the Erin group will provide support and cover the family’s expenses for one year.

The Hizans – Mohamad, his wife Souzan Naasan and children Asmaa, 13, and Aref, 17 – are living in an apartment at the farm of Don Chambers and Joanne Kay near Hillsburgh.

“It was the best day of my life, arriving in Canada,” said Souzan, speaking through a translator. “People are so generous.”

Mohamad said they are relieved to be in a safe place.

“We can relax, knowing that the kids will have a great future.”

The family will be moving to an apartment in Georgetown, providing easier access to shopping, English language classes and employment.

It will also put them close to Mohamad’s best friend from school, who moved from Syria 20 years ago and now lives in Georgetown.

“I’m really happy – I never thought we would meet again,” he said.

The Syrian civil war between the ruling regime and rebel groups started in 2011 and has claimed the lives of more than 400,000 people. About 5.7 million Syrians have fled the country and more than 6.1 million are displaced internally.

The Hizans lived in the large city of Aleppo, with Mohamad working as a mechanic and machinist, a trade he would like to resume. Aleppo saw heavy fighting between 2012 and 2016, and many sections of the city are destroyed.

“We were in the middle of danger,” said Mohamad.

Caught between warring forces, they decided to flee – first to other areas in Syria and then to Beirut, the capital of Lebanon.

Both Mohamad and Souzan have relatives still living in Aleppo. While not as dangerous as a few years ago, it is still unsafe, with some civilians killed in recent rocket attacks.

They said the refugee camps in Lebanon were too crowded and dangerous, and they were able to rent an apartment in Beirut.

Being displaced has meant the children did not get proper schooling. Mohamad said he was prohibited from taking a regular job in Lebanon, but was able to work for cash, at half the normal rate of pay.

The family was accepted for the Canadian refugee program and paired with the Erin group late in 2017, but the system moves very slowly, and they did not arrive until a few weeks ago.

Now they can focus on improving their English skills and pursuing their interests. Souzan would like to be a chef. Aref would like to be a mechanical engineer, unless he can make a career as a professional soccer player. Asmaa is interested in art and photography.

“They are very keen to learn more about Canadian life, and about Canada itself,” said Barbara Harrison of Erin Refugee Action, which has a team of volunteers providing active support.

“They want to thank everyone involved for helping make this possible.”

As with the first refugee family, the Hamouds, the group has a Grow a Row program, calling on local gardeners to consider planting extra vegetables, fruit and flowers to share with the Hizans (contact Margaret Man-waring at  416-669-7803 or margaretmanwaring@gmail.com).

Erin Refugee Action is planning another sponsorship, this time an extended family from Afghanistan – a father, mother, child and two grandparents.

It will be treated as two families, so the total amount of money to be raised is $41,000. Harrison said the group has about $20,000 from previous fundraising, and hopes for continued generosity from people in the area.

More information on local fundraising is available at erinrefugeeaction.ca.