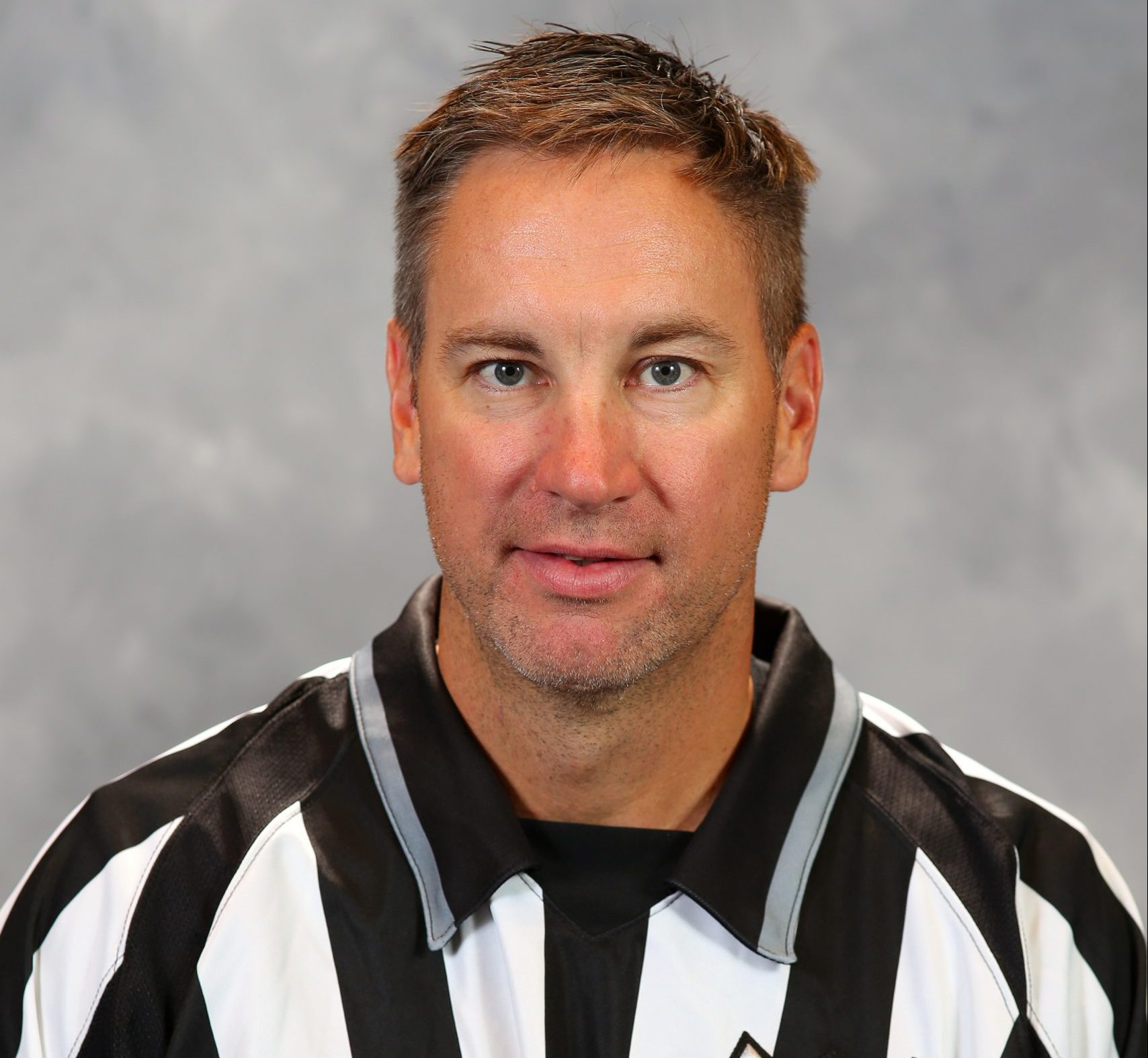 KITCHENER – After a “once-in-a-lifetime experience” in Edmonton, NHL linesman Scott Cherrey is “just excited to get home to regular life – at least as we now know it.”

The Drayton native relayed his memorable experience to the Advertiser on Oct. 2, three days after arriving in Kitchener following 70 days out west.

Cherrey, 44, got home one day after the Tampa Bay Lightning defeated the Dallas Stars 2-0 in game six to win the Stanley Cup.

On on July 21, the 13-year NHL veteran landed in Edmonton, the location of one of two “bubbles” used by the NHL (the other was in Toronto) for its 2019-20 playoffs, after the season was temporarily interrupted due to the COVID-19 pandemic.

During his four-day quarantine, Cherrey was immediately impressed by the scope of the bubble operation, noting there were four hotels, among other amenities, connected by fencing that housed players and staff.

Over 1,300 people were on site at the two bubbles, which merged in Edmonton in early September for the semi-finals and final.

Cherrey was one of five linesmen chosen to officiate the final series from a group of about 40 (20 in each bubble).

He officiated games three and five of this year’s final, marking the second year in a row he was chosen to take part in the final playoff series.

“It was obviously a huge honour,” Cherrey said of being chosen for the 2018-19 final, during which he officiated games two, four, six and seven.

“It’s what we work hard for and what we train for,” he said, noting he was again honoured to return to the final this year.

“It’s the pinnacle of what we all work for,” he said.

Life inside the bubble “was pretty memorable,” Cherrey said, noting the NHL did a fabulous job of keeping players and staff safe.

He was tested daily for COVID-19 and received regular updates on league-wide results.

There were no cases reported in either the Toronto or Edmonton bubble, with close to 30,000 tests conducted.

“To have zero cases was amazing,” Cherrey said, noting it proved the bubble system worked.

While inside the bubble, players and staff were provided with a wide range of  entertainment options, including golf, pickle ball, table tennis and other leisure activities.

Plus, on their days off, the officials got to watch the NHL games from a suite inside Rogers Place.

“It’s something to tell the grandkids,” Cherrey said of the unique experience.

For now he will “put the skates away for a little bit,” enjoy reconnecting with his family and get his body ready for the coming season.

The NHL has announced plans for a full 82-game 2020-21 season, possibly with fan attendance phased in, but a start date has not yet been announced.

Cherrey was told to prepare for a possible December start.

Among the milestones Cherrey missed while away were the 20th anniversary of his marriage to wife Christa and the birthdays of two of his three children.

“I‘ve got some making up to do while I’m home,” he said with a laugh.

His family looks forward to returning to his hometown, Cherrey said, adding his parents John and Linda still live in Drayton.

And his  wife’s family lives near Pike Lake in Minto.

Cherrey played minor hockey in Drayton and then moved on to the Jr. B Listowel Cyclones.

In 1993 he was drafted 3rd overall by the North Bay Centennials of the Ontario Hockey League (OHL).

Cherrey enjoyed  several successful years in the OHL and was drafted by the NHL’s Washington Capitals in 1994.

But he never signed an NHL deal and later played for the University of New Brunswick, and had one season in the East Coast Hockey League, before quitting.

Several years later, he got serious about the sport again – this time as an official.

He made a meteoric rise to the NHL in 2007 after just five years as a linesman.

Though he’s now served 13 seasons in the sport’s top league, Cherrey said he doesn’t take anything for granted.

“I try to enjoy each moment and each game,” he said.

He added there is great camaraderie among NHL officials, whom he described as the “third team” on the ice.

“We really root for each other … it’s what drew me to the profession, really,” he said.