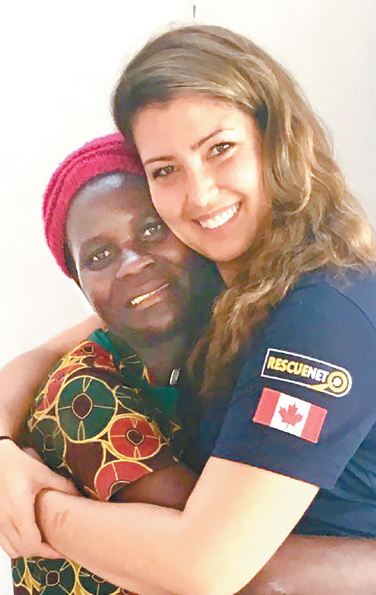 Memories - Kaylie Arsenault, right, has good memories of the people she met in Malawi in 2016. Submitted photo

BEIRA, MOZAMBIQUE – Kaylie Arsenault of Rockwood is part of a humanitarian mission to help victims of Cyclone Idai, which struck the east coast of Africa on March 14, causing severe flooding in three countries.

She is a volunteer with RescueNet, an international disaster response agency, on a team headed for the port city of Beira, Mozambique, at the mouth of the River Pungwe.

“I got the call on Tuesday [March 19], and it’s just a bit of a blur. Everything kind of feels like it’s going in slow motion. It’s hard to sleep,” said Arsenault, before leaving last weekend.

The city of more than 500,000 took the brunt of the cyclone, with winds reaching up to 177km/h (106 mph) and heavy rainfall. Idai had come ashore earlier in March, moved out to sea, then struck again on March 14 with Beira in the centre of its path.

The storm moved inland, causing severe damage in Zimbabwe to the west and Malawi to the north. At least 600,000 people have been displaced, with 150 square miles flooded in the Beira region, submerging entire villages.

A huge inland lake has formed on the low-lying land near the river, which drains areas further inland that were also inundated. A week after the storm, there were still more than 15,000 people stranded on rooftops in need of rescue.

“It was just awful,” said Arsenault. “Because it is so water-based, it will be messy, like going into a war zone. By the time we get there, there’s going to be a lot of infections.”

The Canadian government announced on March 23 that it is contributing $3.5 million to assist in the humanitarian crisis that has claimed at least 700 lives.

Arsenault will be part of a team that includes doctors, nurses and search and rescue specialists. She is trained in psychological first aid, and will provide a helping hand wherever she can.

Through her employer, Pollock Pools and Spas, the team is bringing 15 portable water filters from Backyard Brands. Each filter can produce one million litres of drinkable water.

Arsenault travelled to Malawi in 2016 with RescueNet on a training mission, but this is her first deployment to a disaster area.

“Everybody on this team has a choice,” she said.

“You don’t always have to go – it’s all volunteer. But I was just in Malawi two years ago, and we were doing a disaster preparedness program, not even thinking that something this traumatic would come to that same place.