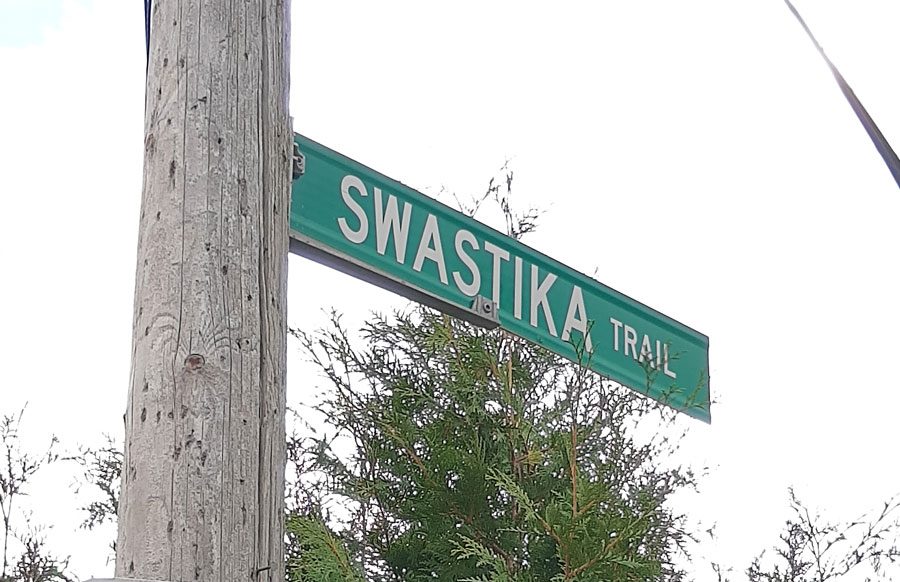 The controversial Swastika Trail will be renamed Holly Trail. Puslinch council made the decision on Sept. 28. Photo by Joanne Shuttleworth

PUSLINCH – Councillors here have agreed to change a controversial street name in the township.

Swastika Trail, in the community around Puslinch Lake, will be renamed Holly Trail.

Council made the decision in a 4-1 vote at its Sept. 28 meeting after local residents Audrey Hoskins and Randy Guzar put forward the name change application and several delegations spoke in favour of changing the name.

The township recently updated its street naming policy, which council approved in July, and based on that, staff also recommended changing the name.

Guzar spoke as a delegation and pointed out the name no longer complies with the naming standards set out in the policy.

Specifically, the policy states that discriminatory or derogatory names, or names that have a commonly acknowledged alternate negative or offensive meaning, do not comply with the policy and should not be approved.

“For many years I have advocated for the township to rename the trail,” he said.

“Our hope is we can retire the street name that has been the cause of much distress in the community.”

Jaime Kirzner-Roberts, director of advocacy and policy at the Simon Wiesenthal Centre in Toronto, also spoke as a delegate and said the street name has been a concern for the Jewish community for some time.

“I urge you to support the recommendation of staff, out of respect for members of the community for whom this causes pain,” she said.

“For Jews, [the swastika] has become the ultimate symbol of horror, mass murder and crimes against humanity.”

Brittany Beheshti, another delegate, noted, “The swastika is not a heritage we need to celebrate.

The matter has come to council before and the name has been the subject of debate for years.

In 2017, council decided not to change the name, citing the fact that when the trail was named, the swastika was a symbol of hope in some religions.

Guzar and neighbour William Knetsch took the township to court, asking for a judicial review of the decision of council.

The court dismissed the request in 2019, finding that while the council decision was likely unpopular, it was not unlawful.

He said Canada Post has said it will adjust the postal code and addresses “at an undetermined date.”

In a recorded vote, councillors John Sepulis, Sara Bailey, Matthew Bulmer and Jessica Goyda all voted to change the name.

Only Mayor James Seeley was opposed.