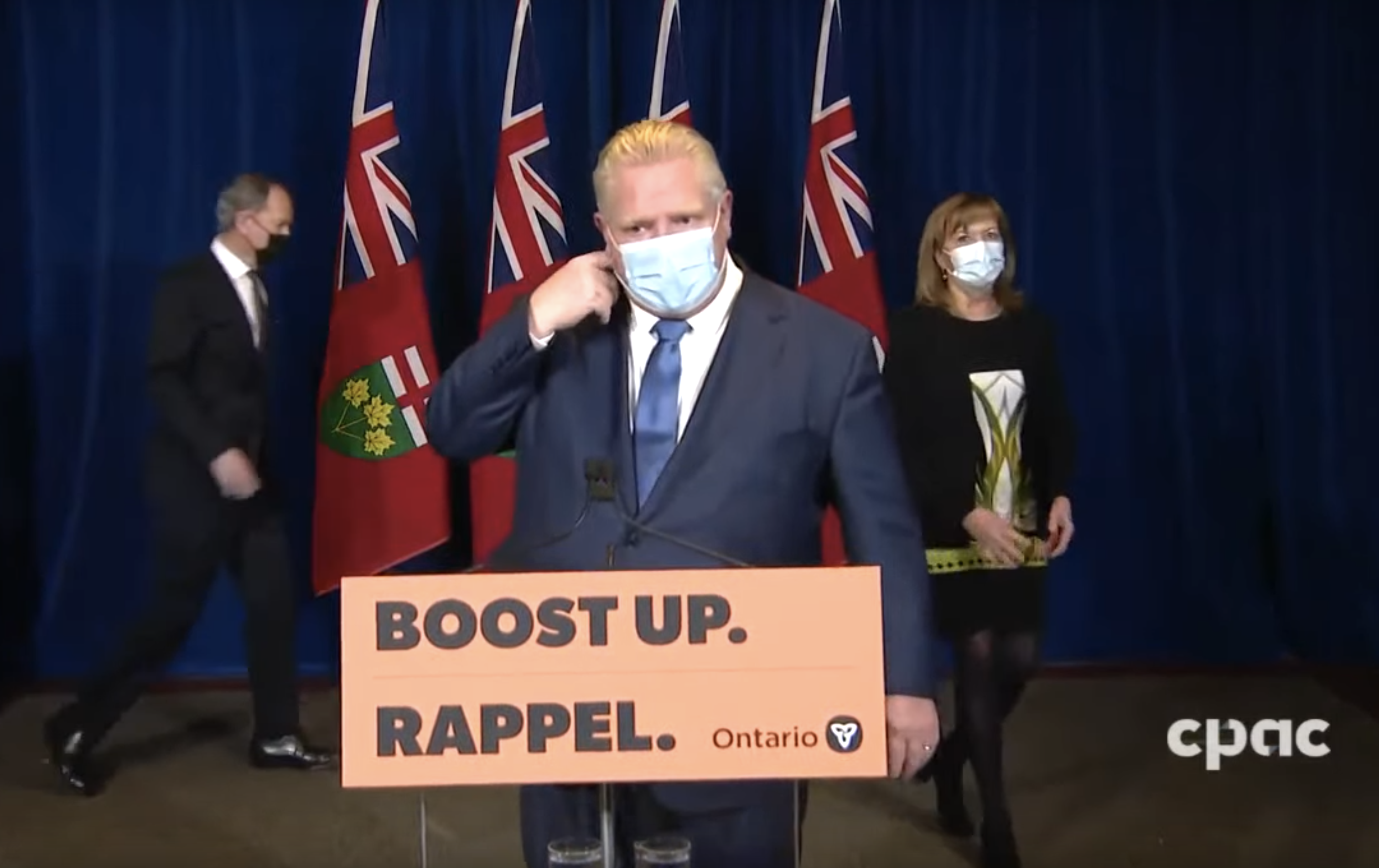 Ontario Premier Doug Ford approaches the podium for a pandemic announcement on Jan. 3. The province will enter a modified version of stage two of Ontario's Roadmap to Reopen on Jan. 5. Students will wait until at least Jan. 17 to return to in-class learning. (CPAC screenshot)

TORONTO – A Jan. 3 press conference began 23 minutes late as Ontarians, on the edges of their seats with anticipation for a post-holiday provincial COVID-19 announcement, waited for Premier Doug Ford’s arrival at the mic.

Ford leaned on the podium as he began telling viewers – at least 35,200 of them – that he promised to speak plainly and “never shy away from being upfront” about the coronavirus and what the government knows.

“Omicron case counts are rising [exponentially] across the province,” Ford said, adding the province was staring down a “tsunami of new cases in the days and weeks ahead.”

“Virtually everyone in this province will know someone who has been exposed to this virus — now we’re bracing for impact,” Ford said.

According to Public Health Ontario (PHO) data, as of Dec. 29, 30,326 Ontarians have been infected with the Omicron variant since it was first detected in the province on Nov. 28.

In response to the swift spread of the Omicron variant said to be driving increasing hospitalizations, although with shorter stays than previously seen, Ontarians will experience the feeling of Groundhog Day as the province moves into a modified version of stage two of the government’s “Roadmap to Reopen” plan.

Restrictions which come into force Jan. 5 include:

A return from the Christmas break to in-person learning is also being further delayed by two weeks – to at least Jan. 17 – Ford announced, walking back an announcement made just four days ago by the province’s top doctor, Dr. Kieran Moore, who stated that in-class learning would resume on Jan. 5 after a two-day delay. 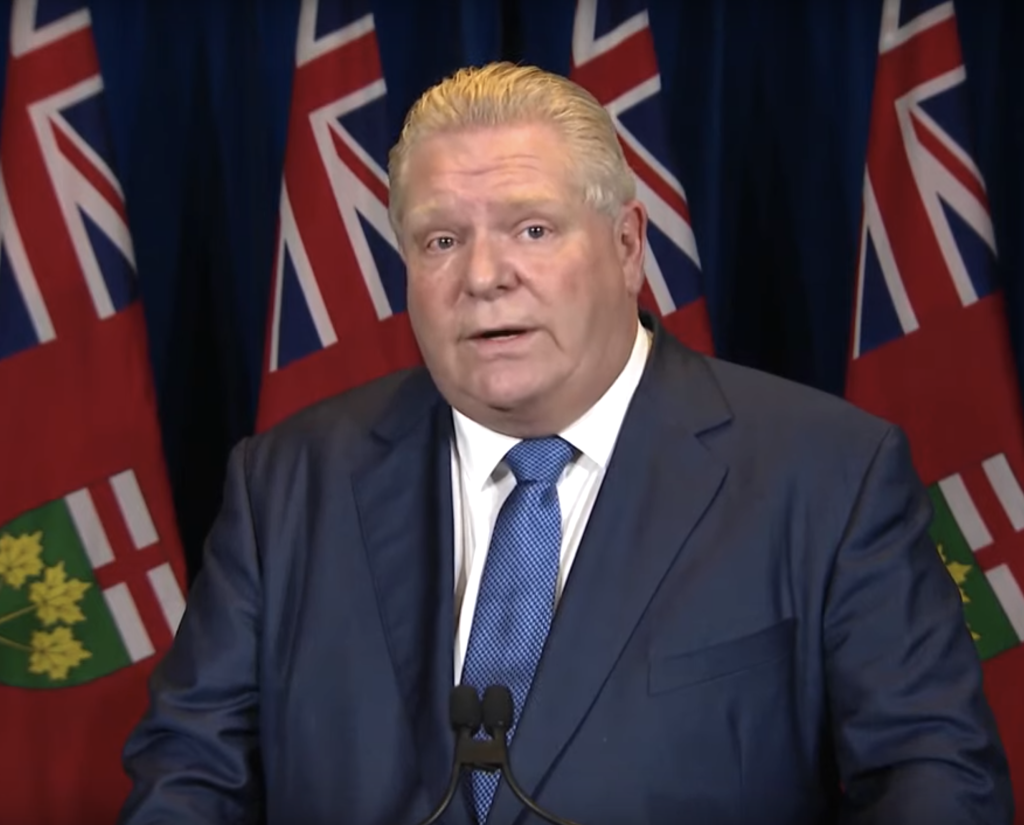 Based on current trends, Ford said his administration has been told the province could be home to “hundreds of thousands of cases every single day.”

On Jan. 2, the most recent date with data available as of publishing, there were 13,578 new cases reported across the province.

The largest single-day jump since the pandemic began two years ago was observed on New Year’s Day with 18,445 new cases reported.

In the Wellington-Dufferin-Guelph Public Health (WDGPH) unit, there were 544 newly reported cases on Jan. 1 – the highest ever single-day increase observed. On Dec. 31, active cases in the health region reached 2,008 – the highest reported number to date.

“It can’t be stopped … it’s too contagious to stop completely,” Ford said of Omicron.

But case numbers are no longer the main focus with many Ontarians no longer having access to publicly funded PCR testing and having to rely on rapid antigen tests – the findings of which largely go unreported.

The modified restrictions, Ford said, are being implemented to “blunt the latest wave” and out of fear that hospitals, already faced with staffing shortages, could become overwhelmed with “triple digit admissions … every single day.”

Responding to a reporter’s question following the announcement, Moore said the most important metric to watch is the hospitalization rate and predicted an increase in coming weeks with a peak by the end of the month.

As of Dec. 29, there have been 79 persons hospitalised who have tested positive for the Omicron variant, according to PHO data.

“The vast majority won’t require ICU or mechanical ventilation,” Moore said of those who will inevitably be admitted to hospitals this month.

The record for provincial hospitalizations was reached on April 22 when there were 2,350 people who were in hospital with the virus, including 757 in ICUs.

Although current hospital stays are significantly shorter than seen in previous waves, Ford said the province could be “thousands of beds short in the coming weeks” given how many Ontrians are likely to become infected with the Omicron variant.

“We need to implement measures that further reduce contacts and mobility,” Ford stated.

The premier emphasized restrictions would be “targeted and time-limited” to allow for more time to administer third doses of vaccinations. He said jabs would be key to preventing hospital overload.

Ford also briefly mentioned expanded support for businesses which he said have disproportionately borne the brunt of the pandemic.

The Ontario Business Costs Rebate Program will offer rebate payments for a portion of a business’ property tax and energy costs incurred while having to close or reduce capacity, according to a Jan. 3 press release.

Restrictions will be in place for at least 21 days, meaning the last day of restrictions, depending on trends and advice from Moore, would be on Jan. 26 at the earliest.

“I want everyone to know this was not an easy decision … But based on the data [and] emerging evidence on Omicron … these additional measures needed,” she said.

According to a PHO study comparing the outcomes of 6,312 people infected with the Omicron variant to an equal number of  those infected with the Delta variant between Nov. 22 and Dec. 17, the “risk of hospitalization or death was 54% lower” with Omicron.

“Results align with findings from South Africa, Scotland and England, all of which have demonstrated substantial decreases in risk of hospitalization associated with Omicron,” the study states.

However, the PHO findings also state: “Due to the transmissibility of Omicron, the absolute number of hospitalizations and impact on the healthcare system is likely to be significant, despite possible reduced severity” — precisely the point the Progressive Conservatives say their decision to implement restrictions is based on.

Ontarians were previously subjected to stage two restrictions under the province’s reopening plan for 16 days, between June 30 and July 16, when the province entered into stage three.