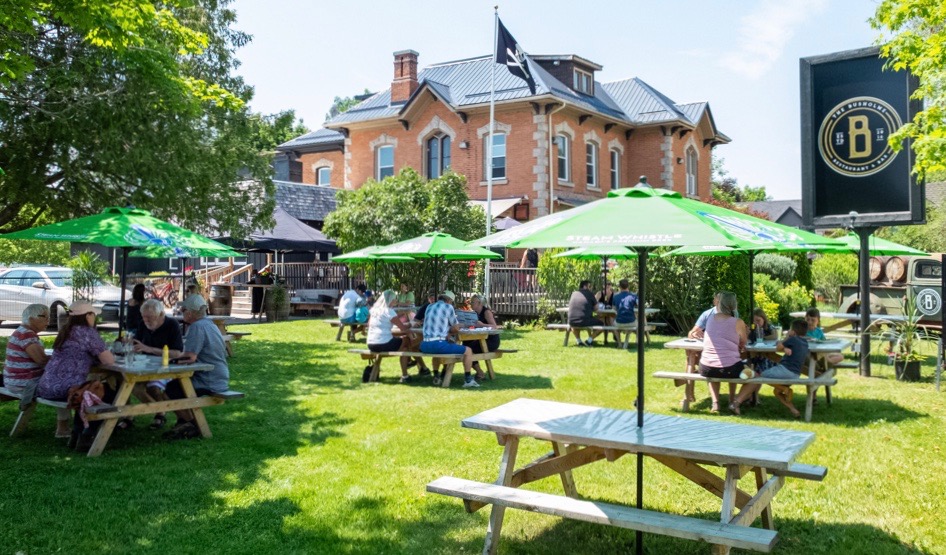 The Busholme in Erin has enough space to accommodate upwards of 112 people at a time over 28 tables. Photo by Jordan Snobelen

WELLINGTON COUNTY – Patios are bustling with life across Wellington County this weekend in a gradual and much-welcomed return to normalcy as the first step of the province’s reopening plan began on June 11.

Beginning three days earlier than anticipated, many area restaurants spent the past days scrambling to prepare after having been closed to in-person dining for months.

At the Goofie Newfie Pub and Grill, nestled above freshly greened trees stretching out from the Grand River’s banks in Fergus, the past week has been filled with before-sunrise mornings and moonlit nights for Rebecca and Rob O’Brian, owners of the local watering hole.

“We have planned and prepped and organized the best that we all know how in my restaurant,” Rebecca said. “I’m over the moon to open.”

She added, “I can safely say going into tonight, I have a different feeling in my stomach than I’ve had — like it’s excitement, but I just hope people are kind and understanding that it’s still a different world even though we’re opening.”

The night before reopening, Rebecca said the last beer keg had just arrived, rounding out the restaurant’s 14 taps.

“Most people haven’t been able to have a nice cold, fresh pint for the last six months, so that was important to open is with as many brands as we could,” she said.

In step one of the province’s three-step reopening plan, restaurants are able to accommodate four people per table outdoors, with tables separated by a minimum of two metres.

If patrons are all from the same household, however, there’s no per-table limit, but the province has left it up to individual establishments to decide on accommodating larger household groups.

While the Goofie Newfie has opted for first-come, first-served, many restaurants, like Brew House On The Grand, are working with reservations to accommodate as many people as possible with limited space and tables.

“We have a capacity for 40 people and we’re doing reservation-only with two-hour time slots,” Dennis Craddock of the Brewhouse said, mentioning Friday and Saturday had already been booked. 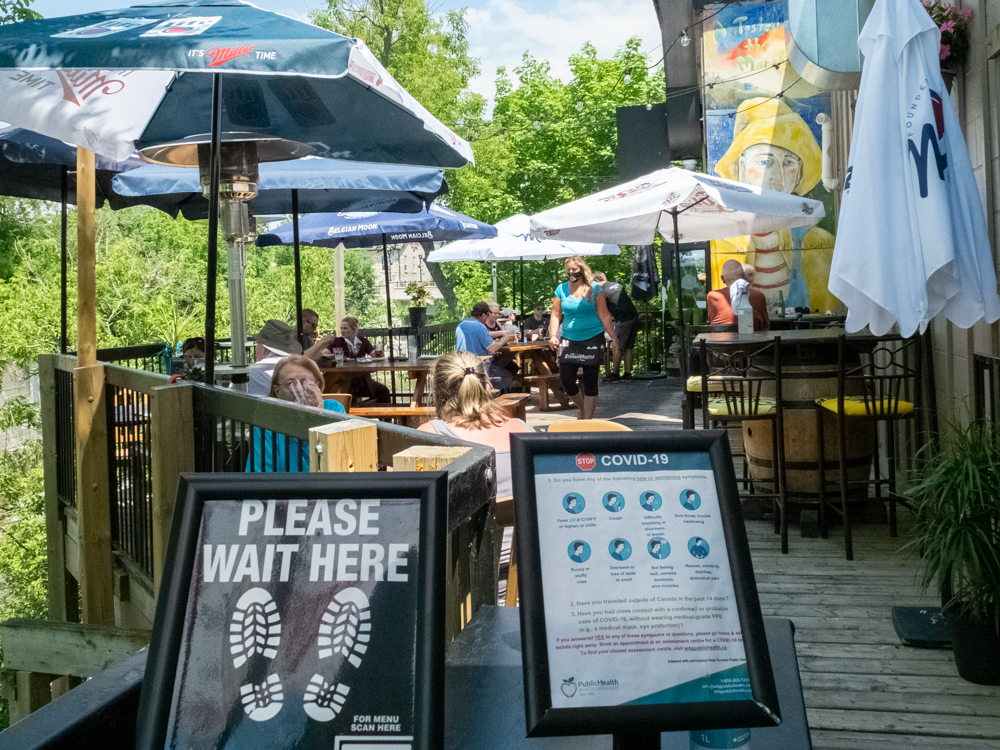 The Goofie Newfie Pub and Grill and Fergus has capacity for about 40 people on its patio. Photo by Jordan Snobelen

Farther north in Mount Forest, a new 1000 square-foot patio can be found at the back of the Sword and Musket, which owner Richard Enser said was just finished earlier in the week.

With capacity for around 30 across bar stools and tables, reservations are also the way to go at the Sword and Musket.

After a year and half of slow business and a massive hit in revenue at the restaurant, Enser said he’s “really looking forward to being busy” over the weekend.

In Elora at The Friendly Society, Ardin Lalui took a break from prepping for the Friday reopening.

“[The phone has] been off the hook since they announced that we could open, like everything’s fully booked for Friday, for Saturday,” Lalui said.

With the ability to use township space out front, the Society can accommodate around 34 guests, compared to its usual indoor capacity of 55.

As for the four-people-per-table limit, Lalui said groups of two and four are actually the most lucrative and they’ve already turned down some requests for larger groups.

“There’s definitely a huge pent-up demand for sitting on a patio,” he said.

“I think people will kind of be expecting more from patios forever now and enjoy them more than ever.”

Lalui said the restaurant is going all out, adding lighting and plastic flamingos to try and create a celebratory atmosphere.

“We’ve been looking forward to this as much as everyone else has,” he remarked.

In Erin at The Busholme, owners Nicolle and Mike Magill have enough space to accommodate upwards of 112 people at a time over 28 tables.

“It’s about time,” Nicolle said of reopening, pausing after closing from another busy day of takeout on Thursday.

The Magills have managed to adapt to the seemingly endless swing in rules, able to keep their staff hanging on with an “unbelievable” amount of support for takeout.

With 67 reservations already booked for reopening day and the weekend quickly filling up, Nicolle said they’ll be “slammed from the moment we open our doors, right until the end.”

“We’ll be laughing, smiling, joking — just welcoming everybody back.”