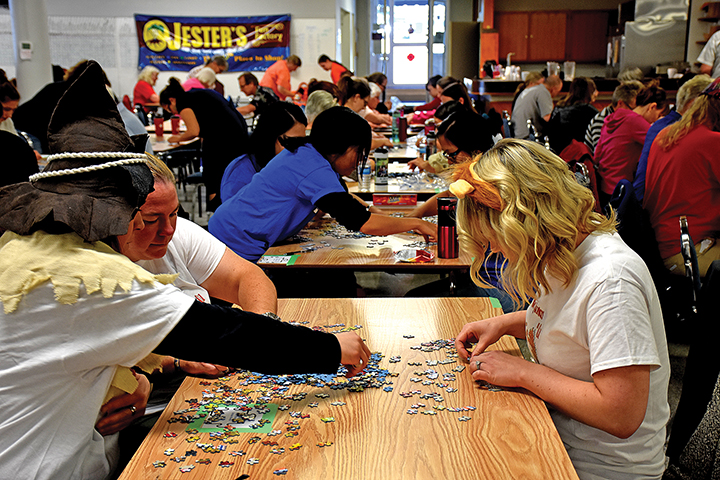 Looking for a piece of the action - Puzzlers from across Ontario took part in the puzzle competition hosted by Jester’s Fun Factory on Oct. 20. Photo by Mike Robinson

FERGUS – It was a packed house at the Fergus Legion on Oct. 20 as puzzle solvers came in search of a piece of the action.

The jigsaw puzzle competition, hosted by Jester’s Fun Factory, brought in competitors as far away as French River and Napanee.

Addressing the over 150 participants, Jester’s owner Evelyn Gould said, “Who knew that jigsaw puzzling would be so popular?”

She added competitive puzzling is gaining momentum in Canada.

“There have been several small events in the last couple of years, however as far as I know this is the largest in Ontario and it is matched in size as the largest in Canada with one which was held in Quebec,” said Gould.

Although competitive puzzling is fairly new to Canada, other places in the world have been hosting events for years, explained Gould.

She noted there is a world puzzle event in Austria that is held over a two-month period.

Sponsors Ravensburger and Cobble Hill Puzzles were represented at the event.

Prior to the startup of the event, Gould announced that she and her husband Tim plan to retire in March.

The couple will be selling all their stock and fixtures to Chris and Stephanie Bailey, current owners of Brighten Up toy and game store in Erin.

Gould thanked the day’s participants as well as Jester’s patrons over the years.

“It has been a delight getting to know all of you a little better. It is with mixed emotions that we announce this will be our last big event as we plan to retire from the toy and game business,” said Gould.

“We are excited for our retirement but will truly miss all the wonderful customers that we came to know and serve over the years. We have been in business since 1997 and it has been an amazing journey.”

Gould stressed Fergus will continue to have a toy and games store.

“We are excited to announce that Chris and Stephanie Bailey will be taking over the Fergus location.”

The Baileys will reopen the Fergus location in March  as Brighten Up Toys and Games. Gould noted they intend to host another puzzle competition in 2020.