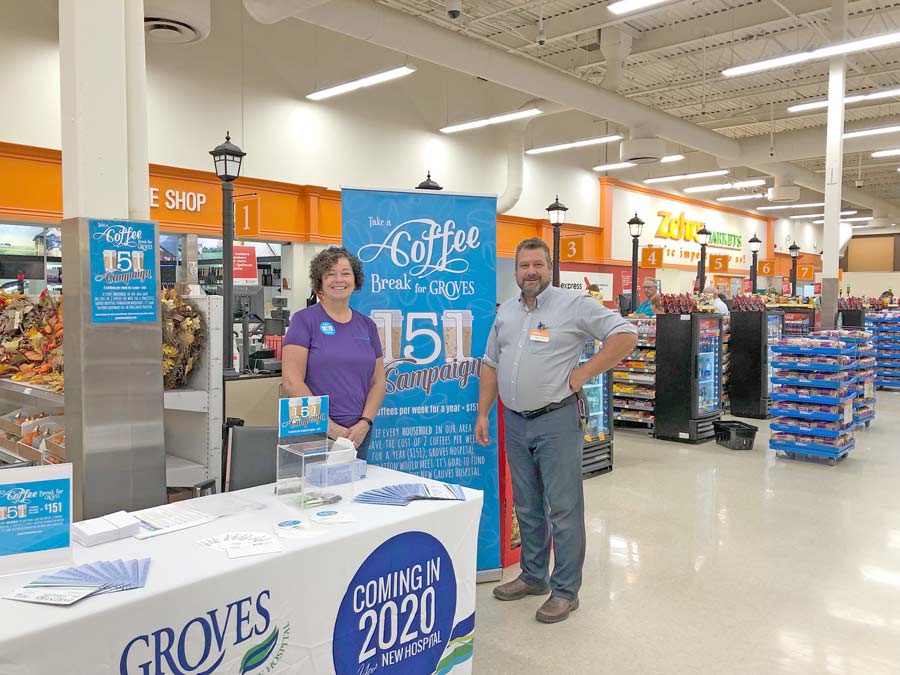 Campaign launch - Cindy Lindsay, chair of the Groves Hospital Foundation, is welcomed by Zehrs Fergus store manager Jeremy Hewitt on Aug. 29 for the launch of the 151 Campaign in support of the new Groves Hospital. Just $151 per household – the cost of two coffees per week over one year – would cover the remaining $2 million in the foundation’s goal of $20 million. Submitted photo

FERGUS – For the cost of two coffees a week for one year, the community to be served by the new Groves hospital could put fundraising over the top.

“We have just under $2 million left to raise, and $151 per household in Groves’ treatment area would allow us to exceed our goal,” said Cindy Lindsay, chair of the Groves Hospital Foundation.

“The community support for the New Groves Hospital Campaign has been incredible – we are so thankful.”

The 151 Campaign was launched on Aug. 29 at Zehrs Fergus, with a table providing information to customers.

The promotional material was designed by Helen Michel,  production manager at the Wellington Advertiser, which is the official media sponsor for the campaign. It was produced by Fergus Printing and Keltech Signs.

Community efforts have now raised the required local 10 per cent share of the project costs, and have exceeded $18 million, which is 90 per cent of the foundation’s overall fundraising goal of $20 million.

The $7 million raised by the Redevelopment Campaign in 2002-06 will also be used to pay for the local share of the build.

The foundation is now focused on raising funds to purchase vital equipment and technology to outfit the new facility on opening day in Spring 2020.

“We are also asking the community to share their ‘Why I Love Groves’ stories, in hopes of collecting 151 (or more) reasons by opening day,” said Lindsay.

“We are sharing these stories on our Social Media (Facebook/Instagram/Twitter) and asking others to consider sharing their stories with #WhyILoveGroves and #151Campaign.”