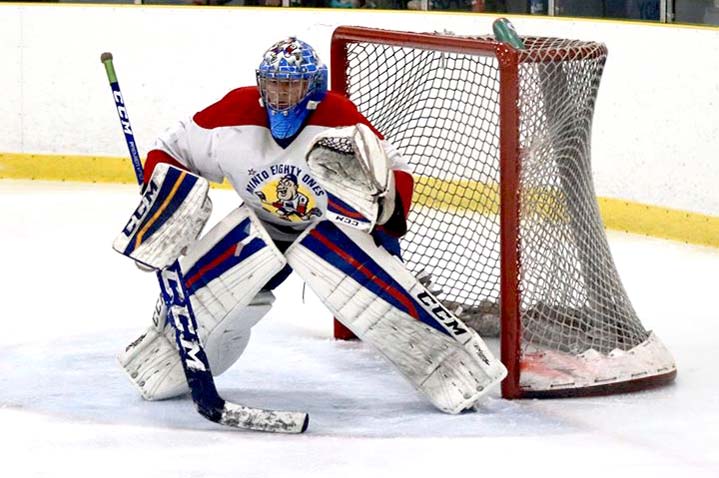 The wall – Minto 81’s goalie Ben Nelson was perfect between the pipes on Sunday afternoon as the 81’s blanked the Lucknow Lancers by a score of 11-0 in Palmerston. The 81’s finished seventh in the WOAA Sr. AA standings and will face the Shelburne Muskies in the first round of the playoffs.
Photos by Stacie Osborne-deBoer

PALMERSTON – On Feb. 2, the Minto 81s played their final game of the regular season against the Lucknow Lancers in Palmerston.

Lucknow had played the Durham Thundercats the night before, winning by a score of 7-3.

The Trains played an outstanding game, winning by a final score of 11-0.

Top scorers of the game were Zach Graham with five points, Wade Pfeffer with four points, and Adam Kawalec with three points. Chris Hardie and Shayne Ross earned their first goals of the season in the game as well.

Goalie Ben Nelson did an amazing job deflecting shots and keeping the puck from the net throughout the game.

The win earned the 81s two points and broke their tie with Durham, meaning the 81’s finished seventh in the WOAA Sr. “AA” league standings.

A tale of two seasons

In the first eight games of the season, the Minto 81’s couldn’t quite find their groove, winning only one game in that stretch, including an overtime loss, leaving them in 13th place by late November.

The 81’s turned their season around and were full steam ahead starting with a win over Milverton on Nov. 29.

After that win, there was no stopping the 81’s, as the team kept that momentum, winning 12 of the last 14 games.

The 11-0 win over Lucknow is a great way for the 81’s to end the season, as they head into the playoffs, which start next weekend against the number two seed, the Shelburne Muskies.

The dates and times of the games against Shelburne have not been finalized as of publication, however it is anticipated that there will be a home game either Saturday or Sunday.

The schedule, once finalized, will be posted at www.minto81s.com and on 81’s social media pages (Twitter – @81shockey, Facebook – Facebook.com/Minto81s).