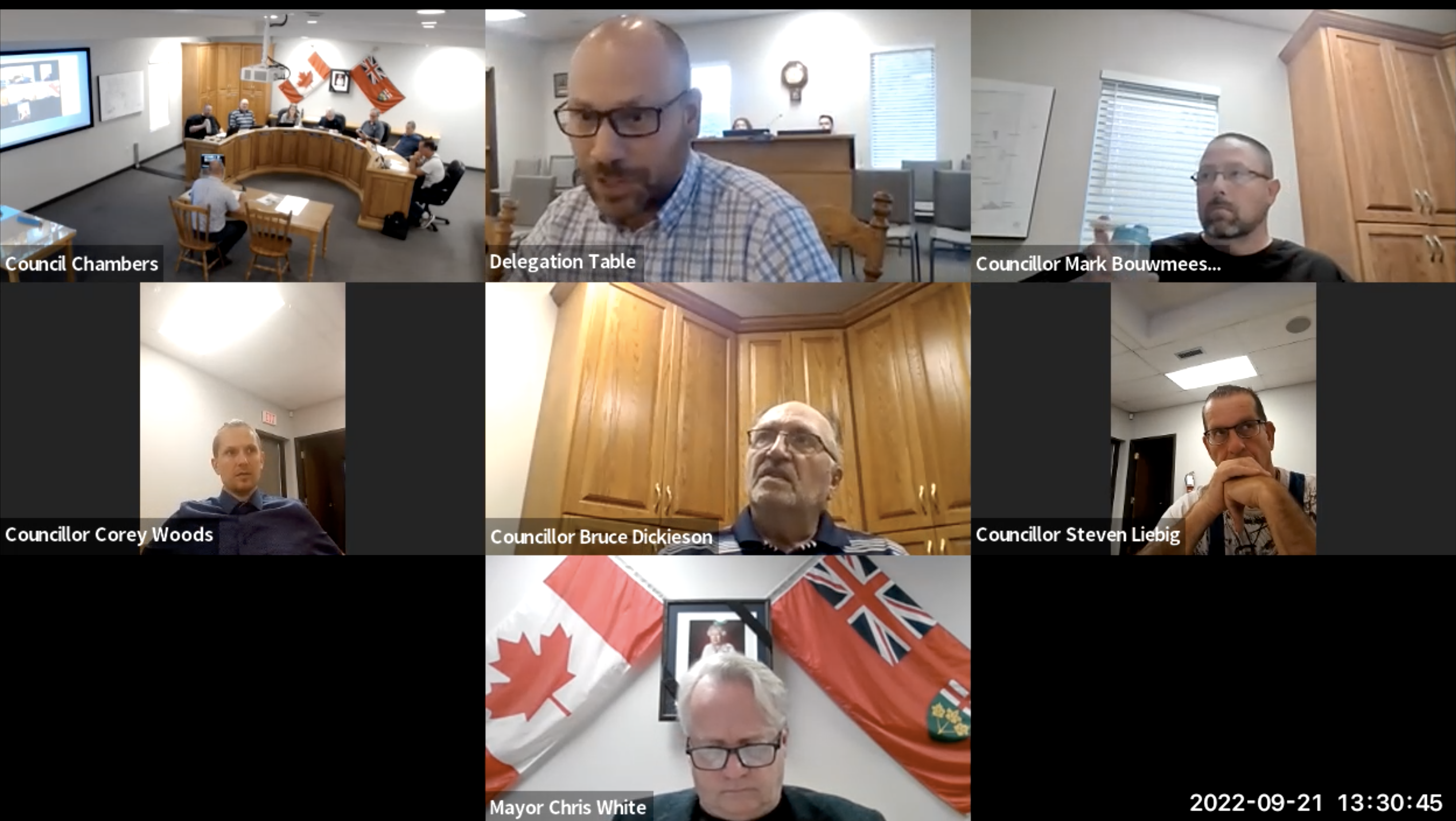 The committee of the whole reviewed the state of two culverts in Marden Park during a Sept. 21 meeting. Screenshot from meeting

GUELPH/ERAMOSA – Two culverts and a retaining wall are at risk of collapsing in Marden Park a recent report has found.

Marden Park is divided into two parts by a creek, with the sides connected by a bridge containing two culverts to support it.

“Back in 2020, field staff had made mention of some deficiencies they noticed while doing their duties in the park with the cross culvert,” stated Robin Milne, director of parks and recreation, during a Sept. 21 committee of the whole meeting.

This prompted the township to retain R.J Burnside and Associates Limited to review the state of the structure as part of the township’s bi-annual bridge inspection.

The 2020 inspection found the structure to be in poor condition. A review conducted earlier this year found the condition to be much more severe.

The 2022 inspection reported several deficiencies between the two culverts, including shape deformation, separating joints and gaps along the culverts.

The inspection also found the retaining wall to be collapsing in certain areas and showing signs of failing.

With the current state of the culverts and wall, the bridge running over the creek can’t bear the weight of vehicles, which led staff to close the bridge to vehicle and equipment access in 2020.

The structure is currently only used for pedestrian crossing.

R.J Burnside has provided a budget estimate of $344,500 for the work, which includes engineering design to remove and replace the structure.

The township has submitted a funding application under the Federal Government’s Natural Infrastructure Fund for the removal of the two culverts at Marden with the replacement of an open-bottom box culvert.

“There is not a reserve fund currently that would facilitate the replacement of this should we be unsuccessful with the grant,” Milne told the committee.

If the township is successful with its application, a detailed report will be brought to council.

However, if the application is unsuccessful, staff will seek further direction from council during 2023 budget deliberations.

“Other options could be put a pedestrian bridge in so it’s pedestrian access only over the creek,” Milne explained.

“One option would be just to remove the cross culverts completely and not have a crossing.

He added, “I don’t think that that’s the best option because it would completely fracture the park into two different segments.

“I would like to see the movement of vehicles and equipment be permitted through the park. I think, in terms of operations, it allows for smooth operations of the park.”

Committee members discussed cheaper options should the township not get the grant, but Mayor Chris White noted the first step is to apply for the grant before looking at other options.

“If we don’t get the grant we’re starting from scratch, looking at the options,” White said.

“If we don’t get the grant, we’re not saying ‘just go ahead and build it,’ we’re saying ‘look at it again.’”

Councillor Corey Woods said given the severity of the structure’s condition, the committee should bring the project forward regardless of whether or not the township gets the grant.

“I think something has to be done there and that would be part of the 2023 budget deliberations,” he said.

“I would think put it in. That doesn’t mean it would necessarily pass in the budget, but I think we need to have a discussion around it.”

“What we want to do is apply for the grant,” White reiterated.

“If we don’t get the grant then we can have these conversations.”

The committee approved the report for information and a more detailed report will be presented to council at a later meeting.