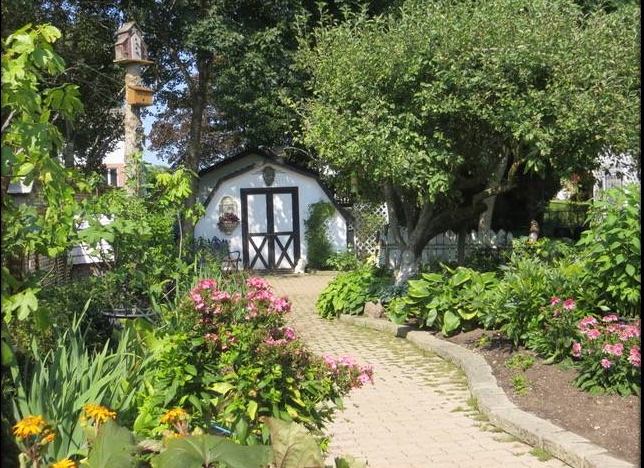 Glorious gardens - Doug and Mary Potruff’s Palmerston home is among those that have been featured as a Garden of the Month by The Harriston and District Horticultural Society. BELOW: Jim and Ruth Ann Webb’s Pike Lake area property has also been featured. BOTTOM: Cliff and Pat Reading’s Harriston home is another past winner. Submitted photo

MINTO – To help celebrate the organization’s 65th anniversary two years ago the Harriston Horticultural Society created a new initiative: a “Garden of the Month” designation for exceptional grounds within Minto.

Everyone who has a beautiful home landscape puts much time, effort and work into maintaining their little piece of paradise, and the horticultural society strives to acknowledge these efforts.

The first year, signs designed by horticultural society member and graphic artist Irmgard Kuersten-Kirkorian were placed on the front lawns of three happy home owners each month and remained for several weeks.

The panel of three judges found that many passionate gardeners had a backyard or secret garden filled with a combination of unusual plants and creative artistry. This prompted a new class, and more signs were added to the allotment in 2018.

The original idea was to have friends, neighbours and relatives contact the society with a recommendation.  The concept took a while to catch on but last year recommendations began rolling in more regularly. Local mail carriers have the perfect opportunity to report on the rural areas. But delivery men, repairmen, service people, Sunday afternoon drivers, or visitors from around the county are urged to submit a nomination if they see a front garden that makes them take a second look.

Originally the Clifford Horticultural Society declined to participate because they were heavily involved with preparations for a 2017 Homecoming Weekend that included prizes for best area gardens. With that project in the rearview mirror, the Clifford group has opted to be involved.

During the past two years many properties in Palmerston, Harriston and the rural surrounding area have been “signed.” With Clifford joining the fold the whole of Minto will be covered.