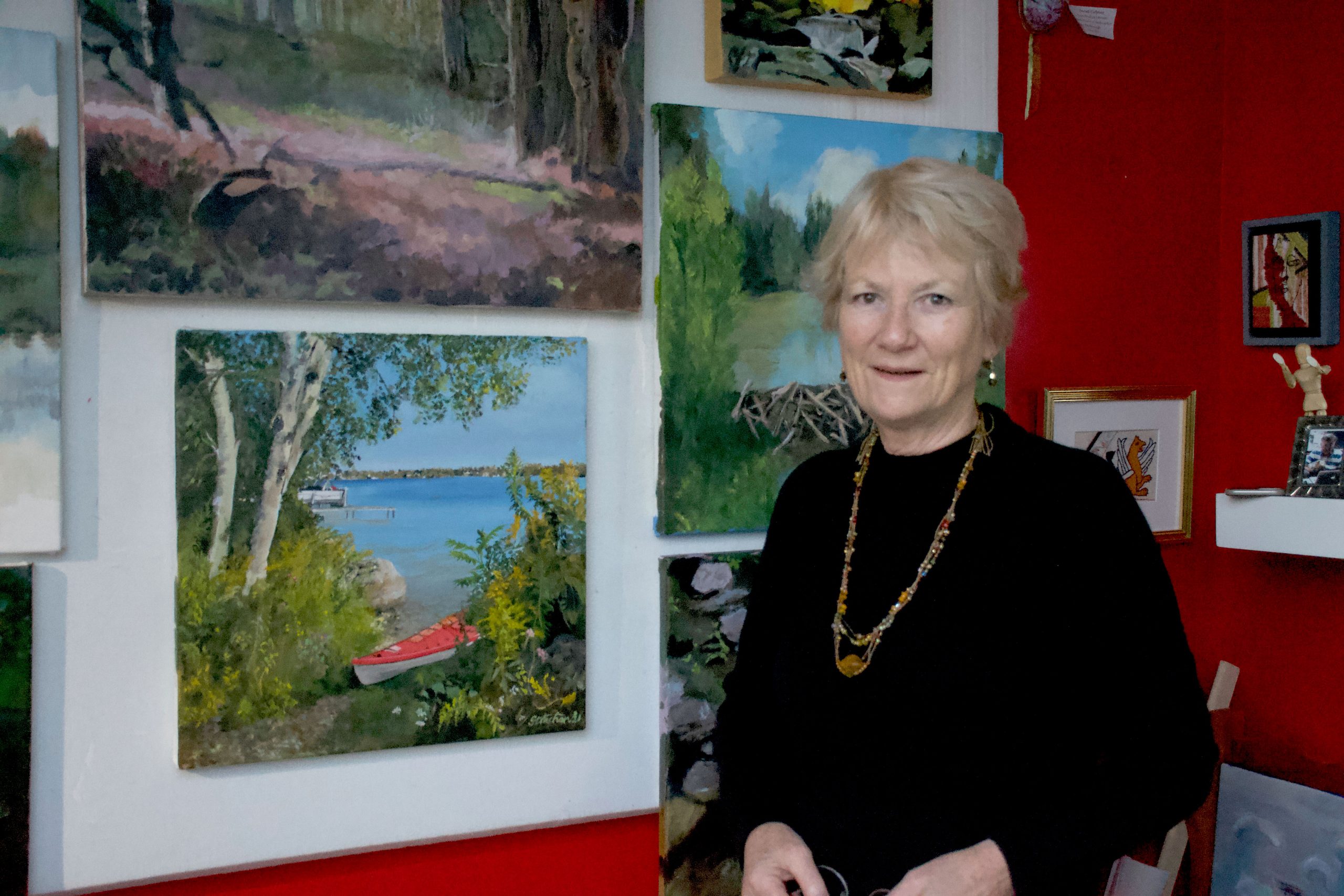 From artist to author – For roughly two hours a day for a month Susan Strachan Johnson sat typing away at what started out as a “COVID Project” but has now evolved into a published novel. Photo by Paige Peacock

EVERTON – For roughly two hours a day for a month Susan Strachan Johnson sat typing away at what started out as a “COVID project” but has now evolved into a published novel.

The local artist has stepped out of the world of canvases and paints and decided to try her hand at writing a novel for children.

Titled Lucy and the Equiman, the story follows Lucy, a young teenager coping with the recent death of her father, and her friendship with a genetically manipulated human-horse hybrid who plays an important role in her recovery as the two pursue a series of adventures.

“It’s about communicating with horses; horses do read faces,” Johnson explained. “You can scowl at a horse and speak in the most gentle way but he won’t trust you, it’s almost as if they know that you’re lying.

After a friend recommended that she check out National Novel Writing Month (NaNoWriMo), a non-profit U.S.-based organization that provides community and encouragement to “wannabe” writers, Johnson decided she’d give the challenge a try.

She began writing in April of 2020, during the early days of the pandemic, with what she referred to as “just a COVID project.”

“Sometimes I didn’t make it and I had to make it up the next day, but it was a really good discipline,” Johnson explained. “And in fact, especially if you’re writing conversation, it goes very quickly.

“Also, it’s set around here … so when I was writing description it was very easy because I knew what it looked like.”

Johnson said it was the editing process that she found more difficult – trying to recreate things, cut things out and make it back up.

She had already completed the paintings for Equimanity, her solo art show set to open at the Wellington County Museum and Archives in the summer of 2020, which couldn’t be finalized due to the uncertainty of the pandemic.

Not feeling inspired to start a new series of paintings, Johnson said writing seemed like a good way to spend the dark days of lockdown.

“I never thought I could do it, but it was April, it was still cold, we couldn’t go anywhere, we were waiting for news of the vaccine, when it was going to come,” Johnson explained. “We’re both over 70 so it was a worrying time.

“So we were stuck here and it was good to have a project.”

Johnson got her first pony at the age of seven and she found her familiarity with the animal helpful when writing.

Given the kind nature of horses, free from cruelty and greed, she said it wasn’t difficult to get into the mind of the equiman.

“It’s all about visualization and how you interpret the world,” Johnson said of finding the connection between art and writing.

“I’ve been drawing and painting horses ever since I was seven and had a horse,” she added, “so getting to understand them and also painting them and also writing about them (was) really natural.” 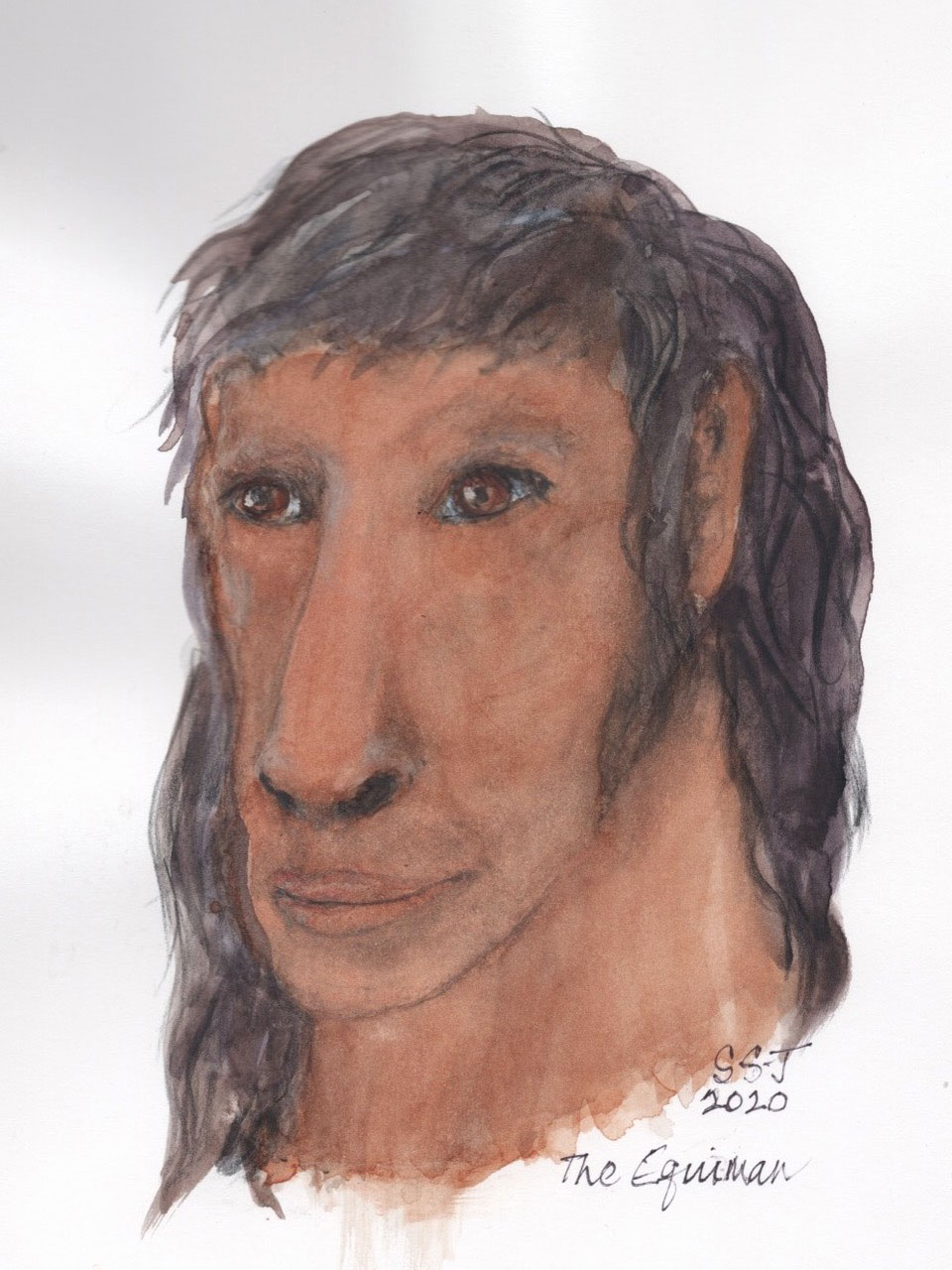 After friends and family read the draft and encouraged her to have it professionally edited, Johnson took it to an editor who then recommended she send it to a publisher, and the book was released in August.

Johnson said nobody’s more surprised than her about the news.

“It was the show actually because it was an interesting concept about these three artists who tend to put anthropomorphic characteristics in their horses,” Johnson said of the inspiration behind the writing.

“And in the end, I just thought – supposing there was a horse and a man, and they were the same thing.”

Johnson said the idea of the equiman stemmed from her realization of the uncertainty of a centaur’s anatomy.

“How can he have two hearts and two stomachs?” she asked. “What makes his front legs work? What about the female species, does she nurse her young like a horse does or like a woman? It just didn’t make sense.

“But, combining the two isn’t that impossible,” she said as she held up an illustration she had designed of what an equiman’s anatomy would look like.

After exploring the idea of horses having human-like characteristics, she wondered what a man/horse hybrid would look like. From there the concept of the “equiman” was born.

“It is for young readers, but grown-ups have enjoyed it too … because it’s also about trying to be a little bit more like a horse, being kind, being gentle, helping someone who’s down.”

Johnson said she’s been asked to write a sequel and she’s not yet sure how she’ll handle it as the protagonist,  Lucy, will now be transitioning into high school and the subject matter will mature.

“One of the things that I think’s going to start off the next book is that people use people,” she explained, whether it be through trafficking, online scams, or politicians who don’t keep their promises.

One of the main messages Johnson’s hoping to send is the idea that “if only people were a bit more like horses.

“If only people could be a little kinder, a little less selfish.”

For more information on Lucy and the Equiman and where to purchase it, or for those interested in comparing the horse versus human anatomy, visit www.susanstrachanjohnsonauthor.com.