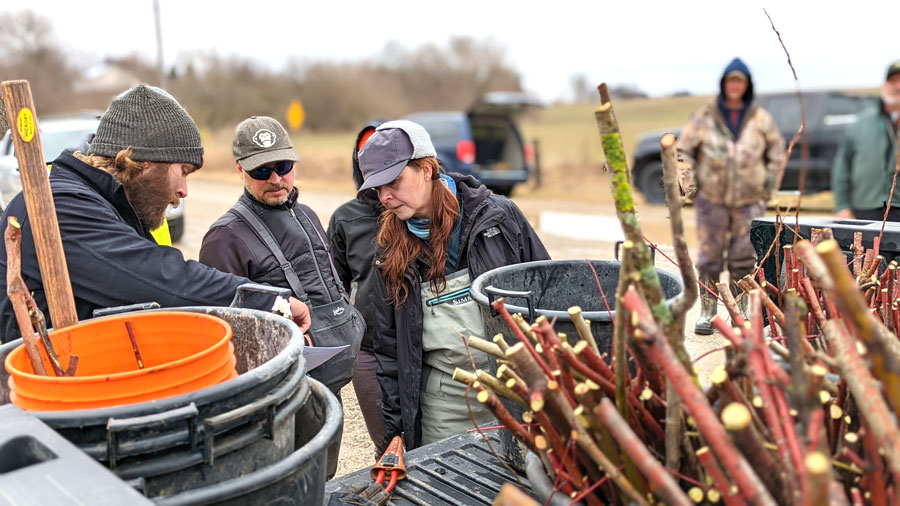 Good friends - Volunteers huddle before planting trees along the Grand River. Friends of the Grand River is looking for volunteers to help with its upcoming tree planting initiative, but there are many other ways to support the organization. Submitted photo

FERGUS – With COVID restrictions lifting, Friends of the Grand River want people to know they are back and looking for some new blood to help fulfill their mandate.

“COVID really shut down our engagement,” said board chair Rob Voisin in an interview.

“Our membership faded; our fundraisers faded. We want to get back on people’s radar.”

Voisin is particularly pleased with the catch-and-release fishery that draws anglers from around the world and draws millions of dollars in tourism to the local economy.

“It’s world class,” he said of fishing on the Grand River. “We get people travelling here from around the world to fish.”

Voisin said the last economic impact study the group did was in 2005 and it indicated that fishing had an economic bump of $1.5 million to $1.8 million to Fergus and Elora.

He said in 1972 the Belwood dam was changed from a flow-over to a bottom draw dam. That means cold water is released downstream of the dam – cold enough for a trout fishery.

“I don’t think it was anyone’s wildest dream it would become the fishery it’s become,” he said.

Friends of the Grand River, with oversight from the Ministry of Northern Development, Mines, Natural Resources and Forestry, releases 25,000 brown trout into the river each year.

The fact that the fish get big is testament to the health of the river, which has plenty of bugs for fish to eat, and enough fish now to attract osprey back to the area.

The group is planning a tree planting blitz on April 30 and could use some volunteers with strong backs, Voisin said. A few weeks ago they did some riverbank stabilization and they expect to release the fish mid-May.

They’ve also partnered with the University of Guelph for water quality monitoring but already, anecdotally at least, the river is wider, shallower and warmer than 15 years ago, and if that trend continues, brook trout populations may not survive there anymore.