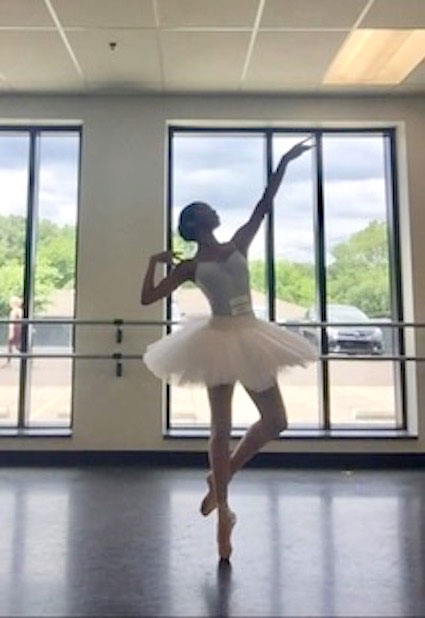 FERGUS – Each day, as she steps into the studio, Fergus resident Veronica Higgins is reminded of how fortunate she is to be pursuing a career doing what she loves: ballet.

The internationally accredited dancer started studying ballet later than most. It wasn’t until she turned 15 that Higgins began formal ballet training.

Starting with tap, and moving on to ballet and modern dance, she was encouraged to pursue ballet professionally after dancing with the Hamilton Academy of Performing Arts.

It was her teacher and mentor Amelia Wanderlingh, who, recognizing Higgins’ potential, pulled her aside after the first day and encouraged her to pursue ballet.

Higgins said it was always something that had been in the back of her mind, but it wasn’t until that moment that she truly considered the possibility.

“I always wanted to dance, even after I graduated high school, but I didn’t even think to pursue ballet in particular as a career,” she said.

“Once I started doing ballet classes every day and training I just kind of fell in love with it and the lifestyle of a ballerina.”

Since then, Higgins has been dancing in Hamilton, Toronto, Michigan, Texas, and Kentucky in ballets such as Swan Lake, The Merry Widow, Emeralds, Sleeping Beauty and Serenade.

Higgins has been training professionally for a number of years, having spent a year with the Texas Ballet Theatre before receiving a scholarship to study with Nashville Ballet in Tennessee where she spent two years training.

From there, she landed a position dancing with the Louisville Ballet’s Studio Company where she has been for three years.

Higgins said she’s chosen to work and study in the U.S. because it presents far more opportunities.

“They have a lot more regional companies that have great repertory whereas Canada only has, I think, four major ballet companies and then the style is also different in the States,” she explained.

“So, getting to do a different style of ballet, or way of training, has also has been really good for me as well.

“They have a great repertory,” she added. “They expect a high level of technique, which pushes you to match that.”

However, Higgins said it has also been challenging to pursue opportunities outside of Canada, because she can’t stay in the U.S. unless she receives a job offer.

That said, Higgins has recently received two professional job opportunities – one from Brock De Ballet in New Jersey and the other from Huntsville Ballet Company in Alabama – which she’s excited for.

“They’re both good companies and I would be excited to work with both of them,” Higgins said. “So, I’m just trying to figure out which one would be best for my career at this point.”

As she gets older, Higgins said she’s realized how many life lessons ballet has provided, including discipline, hard work, problem solving, and perseverance.

“It teaches you how to work with a group of people to get to a common goal,” she said, adding, “it teaches you that if you want to achieve something you have to work for it.”

Higgins said her long-term career goal is to dance in an international company that carries a large repertory.

Working with an international company would allow Higgins to tour different parts of the world with a company recognized and known internationally by others.

“I’ve recently learned how much dance can inspire people, so I hope to inspire people throughout my career and encourage people to pursue their dreams as well,” Higgins said.

She added her dream is to work with the Royal Ballet School in London, England because it’s her favourite company.

“English has a specific style that is so clean and precise, but it’s very artistic as well,” she said of the dance style. “And they have a great repertory there as well.”

Asked what prompted her to pursue a career in ballet, Higgins said, “I feel like I can be myself on stage, and I feel like when I dance the best parts of me are being shown to everyone who is watching.

“It’s a beautiful art form that requires a lot of work and it’s challenging and I think I like the challenge that comes along with it as well,” she added.

“I’m reminded every day that I dance that I’m lucky to even be in the studio and be able to do what I love every day.”