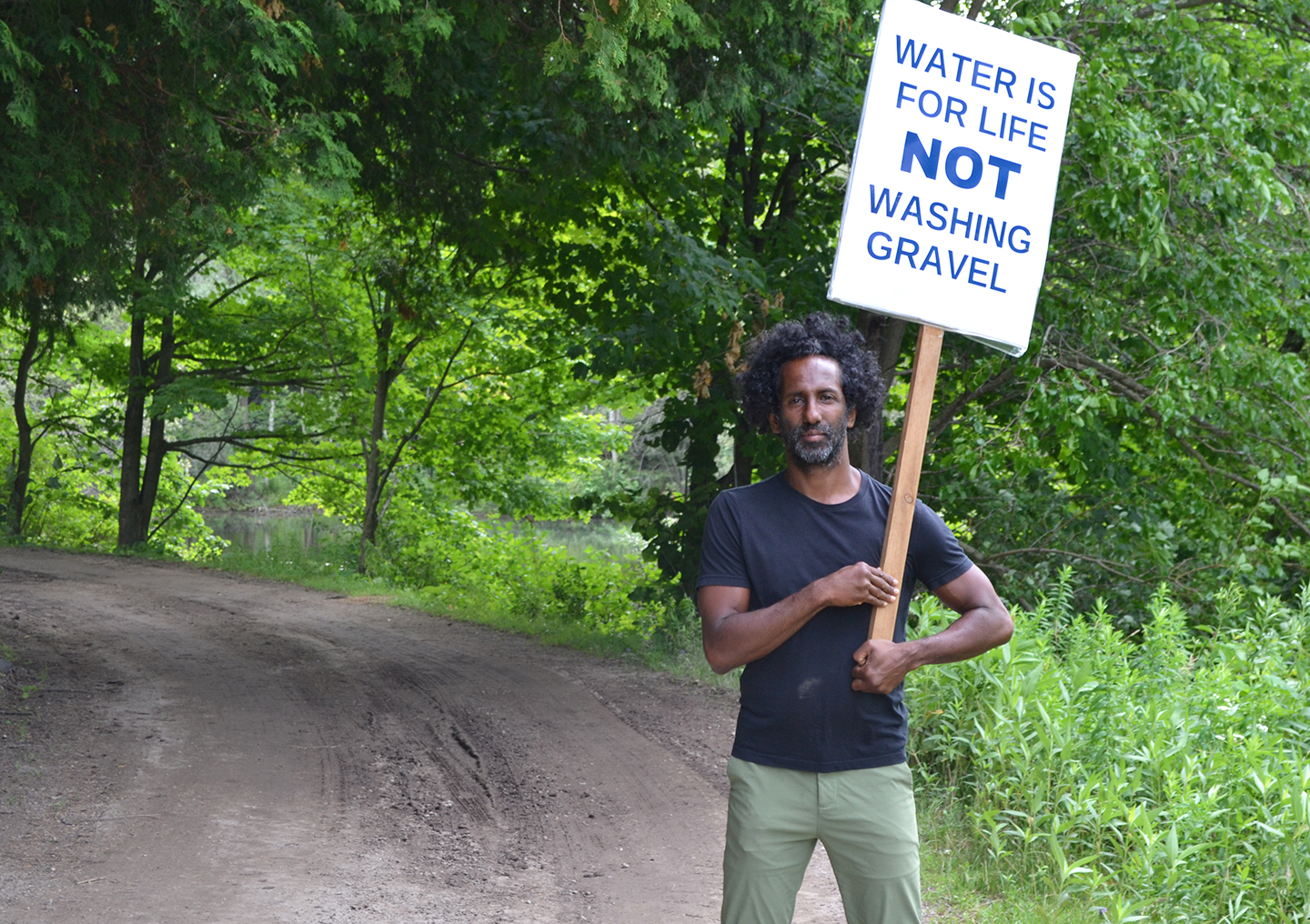 Shane Philips and members of the Wellington Water Watchers held an event on July 15 to express their opposition to James Dick Construction's "hidden quarry" near Rockwood. The event took place on day three of the second phase of Philips' Ear to the Groundwater Tour.
Photo by Curtis Gordon

On July 15, the Ear to the Groundwater Tour, led by Philips, made its way to Stephanie De Grandis’ Walnut Hill Tree and Critter Farm, located just one kilometre from the quarry site at the corner of Highway 7 and 6th Line.

Philips, a singer/songwriter and activist from Guelph, has teamed up with the WWW for the walking tour, which, in its second phase, is focusing on threats posed by gravel mining.

“With WWW and this tour, we’re showing people that we’re actually connecting our communities, and we’re connecting each other and unifying in this fight,” Philips told the Advertiser.

“Everyone’s been so supportive and super receptive. People are very concerned, fed up with the government, and ready to get behind this.”

Philips is walking 91km between July 13 and 21 to several communities in the area where quarries for gravel mining are either operating or are proposed.

Backed by WWW officials, he says this leg of the tour is raising awareness of the devastating effect gravel pits and quarries have on communities and the environment.

JDCL’s proposed “hidden quarry” is currently in its licensing phase. It was approved last year but is not yet in operation.

On July 15, Philips and De Grandis described how the “unnecessary” quarry will jeopardize De Grandis’ ability to water her livestock and crops.

Philips was once again critical of governing bodies, which he said have not even considered environmental issues.

“The system of governance around permit issuing seems to just favour these companies first, and always thinks about the communities it affects last, and doesn’t even consider the environmental impacts at all,” Philips said.

He added he believes the issuance of permits for quarries has been reckless and compared the issue to the wild west.

“I find it quite astonishing that bodies like LPAT (Local Planning and Appeals Tribunal) can issue these permits and not even step onto the land and see what’s going on here,” he said.

“There is drought here. Just walking onto Stephanie’s land, I am actually scared for her. This has been her land for 60 years. I can see how low her pond is.”

Philips said he has also visited other farms in the area with similar problems with low water levels.

“I wish people could come here and see the effects of what an already stressed water system has to the surrounding environments, and then imagine what it would be like in 10 years if we allow these massive companies to come in and yet again build another useless gravel pit for extraction that we don’t need to have.” 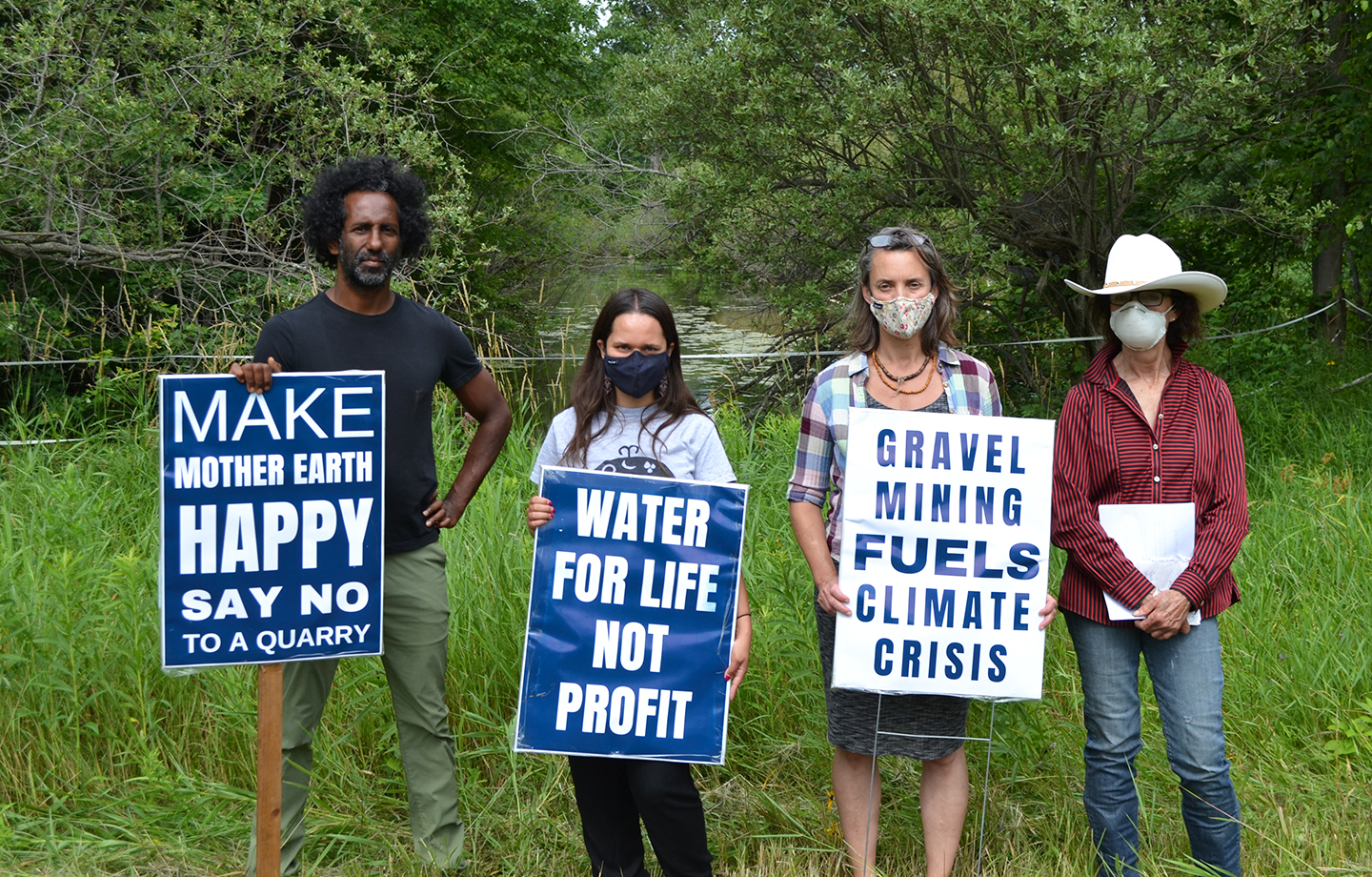 Philips added, “we don’t need … another open mine, while we allow other mines to dwindle and not be used.”

De Grandis said the quarry will exacerbate the problem of low water levels and pose significant health hazards and other disruptions to the community.

“There’s scientific evidence that if you live near a quarry, the incidence of heart disease and asthma will go up, because of the dust,” De Grandis said.

“The other issue is roads, and the pollution caused by trucking all this stone that is unneeded. They’re going to jam up all of our roads.”

De Grandis said because of climate change, it is important to preserve as much water as possible.

“No one should be taking up any stone, any sand, or any gravel, because this is where we get our water,” she said.

JDCL executive vice president Greg Sweetnam disagreed with the arguments made by DeGrandis, Philips, and the WWW.

Sweetnam told the Advertiser an extensive, eight-week hearing with experts took place and determined the proposed quarry would have no effect on DeGrandis’ pond.

“We agreed to monitor her pond, but she refused,” Sweetnam said.

He added that unlike other quarries, no dewatering will take place at the “hidden quarry.”

Sweetnam also said the quarry will only be allowed to operate during parts of the year when water levels are deemed to be high enough.