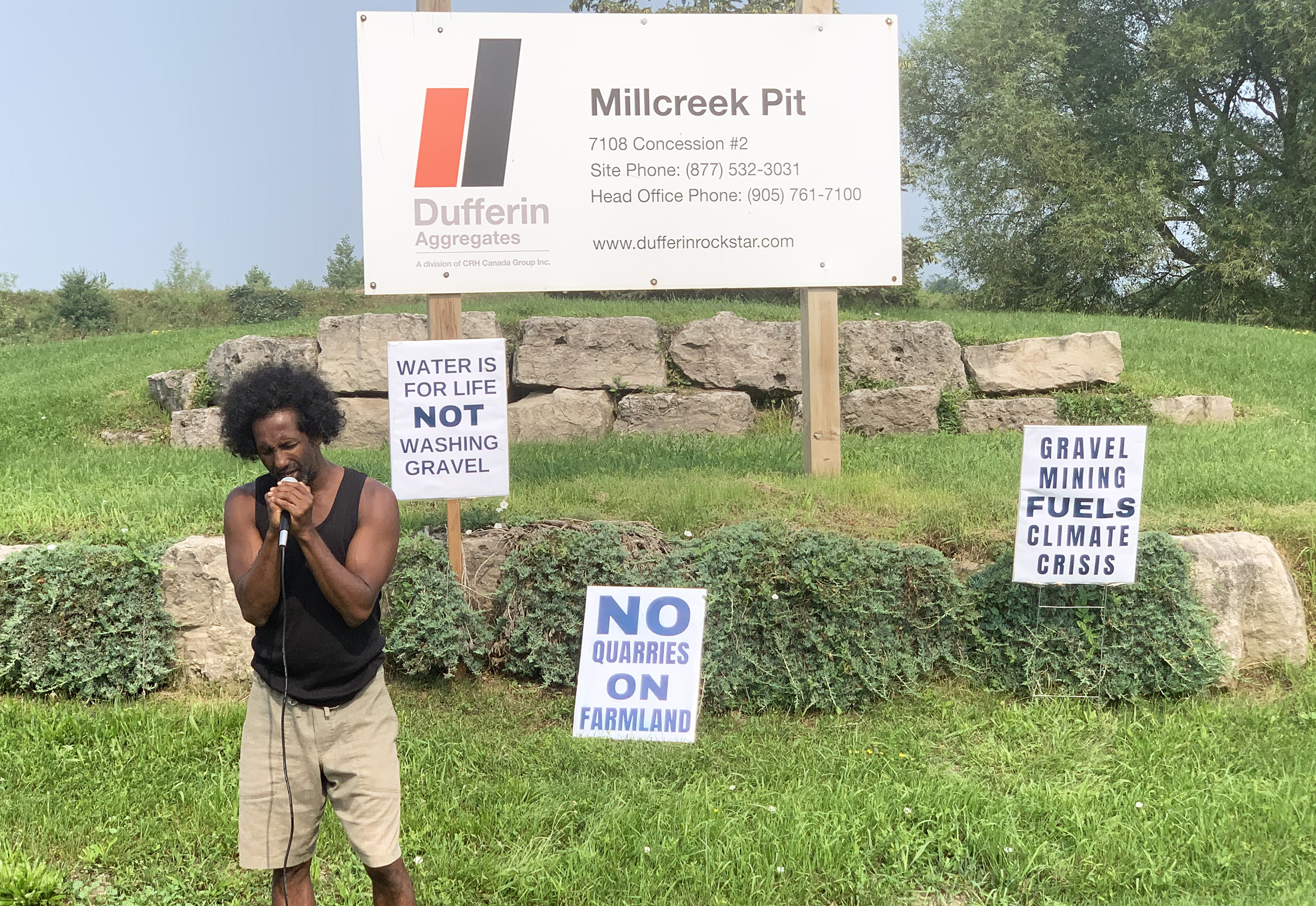 Shane Philips performs "Water You Heal Me" at the Millcreek Pit on July 19. As part of day five of the second leg of the Ear to the Groundwater tour, Philips and the Wellington Water Watchers expressed opposition to Dufferin Aggregates' operations at the Puslinch pit. Photo by Curtis Gordon

PUSLINCH – Day five of the second leg of the Ear to the Groundwater Tour highlighted opposition to operations at the Millcreek Pit, located on the border of Puslinch and Cambridge.

The second phase of the tour, a joint effort between musician Shane Philips and the Wellington Water Watchers (WWW), highlights opposition to proposed and operating quarries and gravel pits in the area.

“I want to remind people that these are massive gravel pits, some of them are visible from space,” Philips said on July 19.

The Millcreek Pit is operated by Dufferin Aggregates, a division of CRH Canada Group Inc.

Philips and WWW executive director Arlene Slocombe said the pit is devastating the landscape of the community and is a threat to the groundwater supply in the area.

Both have been critical of what they say is excessive below-the-water-table extraction of gravel, citing environmental concerns.

While acknowledging the need for aggregate, Philips called the company’s operations at the pit unnecessary, noting there are already a large quantity of gravel pits and quarries in the area.

“It’s unnecessary when you currently have approximately 2,000 that are lying dormant. We want to remind people to say no to any new quarry,” Philips said.

“We just want to let the government know there should be no more of this. You have enough pits, and there’s not enough demand to even fill the jobs.”

Philips said that prior to the walking tour, he wasn’t aware of the extent and quantity of gravel pits and quarries in the area and called them “open sores on mother nature’s land.”

“I’m sort of getting numb to the issue by seeing it all,” Philips said.

“It’s outstanding what human technology can do, but it’s also sad that we use this technology so aggressively against mother nature, which is our home.”

Philips empathized with gravel workers, including those with Dufferin Aggregates, and said he lays zero blame on them or even with the company as a whole.

“I feel for them. I know they’re doing their jobs,” he said. 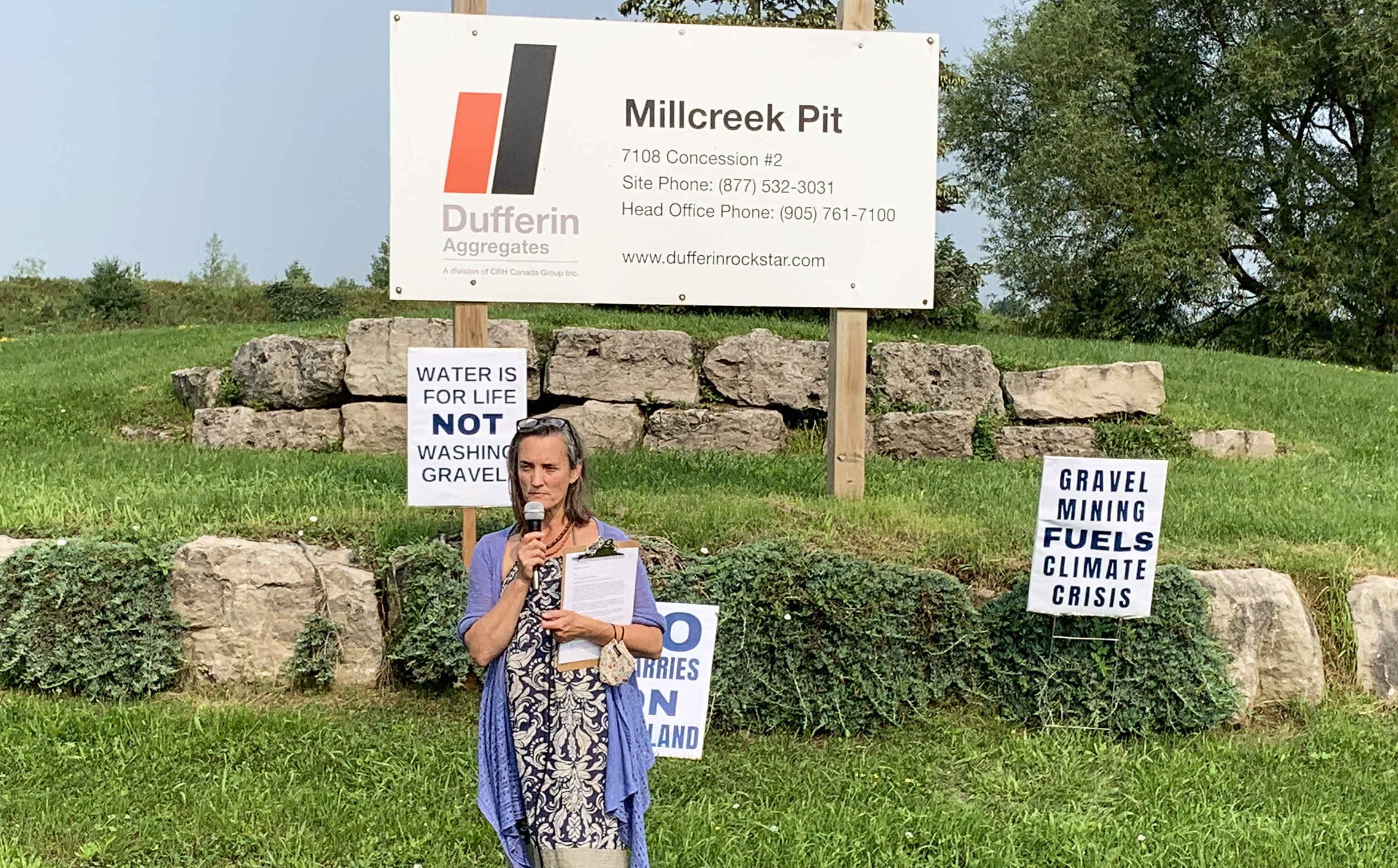 Philips then said he would like to see a just transition of all extractive jobs toward “green” jobs, noting it would be worth paying the price if it meant preventing environmental damage.

“This is the time in our country’s existence to now develop new paths forward,” he said.

“If we’re going to get into sustainable industry, this is a great way to transition these jobs into green jobs.”

Slocombe said the tour made a stop at the Millcreek Pit to highlight the cumulative impact of gravel pits in the area.

She was critical of the Aggregate Resources Act, saying it favours aggregate companies over the greater community and allows a “wild west” scenario to take place.

“I understand the power of the lobbying from this industry is phenomenal in this province,” Slocombe said.

“We’re getting a sense of that over this past week in the areas that we’re seeing.”

Slocombe continued, “I believe there’s a need for a pause on issuing new permits until we can all wrap our heads around what is already allocated and what is really needed.”

She said the WWW is now planning a third phase of the walking tour.

“It’s time to get out there, and we have to do everything we can to bring this into our collective awareness.”

The July 19 event at the Millcreek Pit concluded with Philips performing his song Water You Heal Me.

Phase two of the Ear to the Groundwater Tour concludes July 21.

Officials from Dufferin Aggregates did not respond to a request for comment.