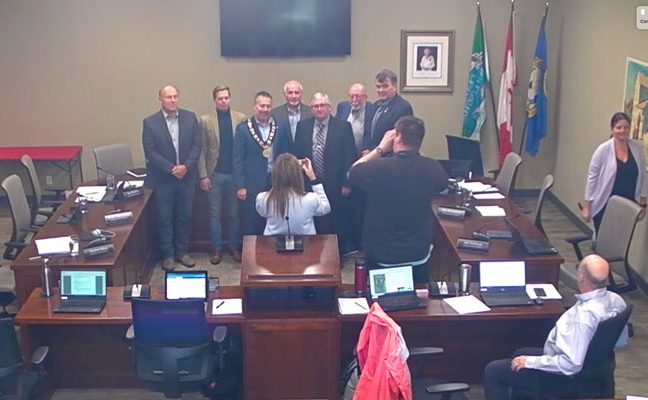 Council gathered for a photo at its final meeting of the 2018-2022 term on Sept. 26. Screenshot from meeting.

This was seen as “low hanging fruit” by the Economic Development Task Force and the Healthy Growth Advisory Committee as one way to get more housing options in the township and to streamline proposals from developers.

Both committees recommended the change and council unanimously approved it at the Sept. 26 council meeting – the last meeting of this council before the Oct. 24 municipal election.

The bylaw also allows for properties in the agricultural zone to run a second business from their farms, such as a home business or agri-tourism.

Maximum height of buildings in highway/commercial zones has increased from 11 metres (three storeys) to 18 metres (five storeys) as long as there is a commercial use on the ground floor.

There is generally plenty of parking in these plazas and these kinds of developments are usually for rental units as opposed to condos, although the bylaw does not stipulate type of housing.

“It should make it easier to build up,” said managing director of planning and development Brett Salmon, explaining the motivation behind the township-initiated bylaw change.

Centre Wellington, with a population of about 30,000 people right now, is slated to grow to 50,000 residents in the next 20 years and the township has been grappling with where to put these people and how to encourage a mix of housing types.

There are still some controls in the Highway/Commercial zone, however.

“Step backs will be required in the building facades facing a street or adjacent to low density residential zones for any floors above the third storey,” Salmon states in his report.

“This should help mitigate potential impacts on adjacent properties as a result of height, shadows and massing.”

The report adds, “Buffer areas and landscaping are proposed to be increased to improve natural features on these sites.

“Lastly, certain commercial uses that are currently permitted in C2 zones but might be considered incompatible with residential units on the same site or within the same building have been prohibited.”

Councillor Bob Foster was a little alarmed about the development that could occur on a farm.

“At some point we’re urbanizing the countryside,” he said.

“I wouldn’t call it urbanizing,” Salmon countered. “The provincial government has identified these as things that are permitted in prime agriculture.

“The idea is to benefit the agriculture community. And housing supply is not just an urban problem.”

This bylaw – part of the plan for more attainable and affordable housing in Centre Wellington – was added by township officials to a list of accomplishments of council during the 2018 to 2022 term.

Mayor Kelly Linton listed the following as highlights of his eight years as mayor and four years as a councillor:

“I thank every member of council for their service,” Linton said.

“Each of you has come prepared and ready for discussion. As a group we should be proud of our accomplishments.”