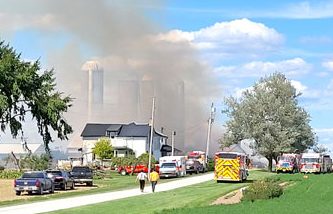 A total of 49 cattle and four horses were lost, but no people were injured in a barn fire in Mapleton Township on Aug. 15. OPP West Region Twitter photo

MAPLETON – Four horses and 49 cattle were lost in a fire that destroyed a barn here on Aug. 15.

Fire Chief Rick Richardson said Mapleton Fire Rescue was called to the blaze on the 4th Line near Wellington Road 12 at around 2:45pm.

Floradale firefighters were first on the scene, said Richardson, with Mapleton’s Drayton and Moorefield stations also responding, as well as firefighters from Elmira, Linwood and St. Jacobs.

No people were injured in the blaze, which was caused by sparks from a straw chopping machine.

Richardson said the farm owner was in the barn with his granddaughter when they noticed the smoke but both got out safely.

“He smelled some smoke and thought maybe his neighbours’ place was on fire so he went outside and the barn was already on fire and he saw it was his own barn,” said Richardson.

“He couldn’t get the animals out because they were all tied up.”

Firefighters sprayed water to prevent a house, which was south of the dairy barn, from catching fire and Richardson said they remained on the scene until nearly midnight.

Richardson said it is difficult to estimate the damage because of the unique system of cooperative rebuilding employed by members of the Mennonite community.

However, by traditional estimating methods, the fire chief said damage would be at least $1 million.