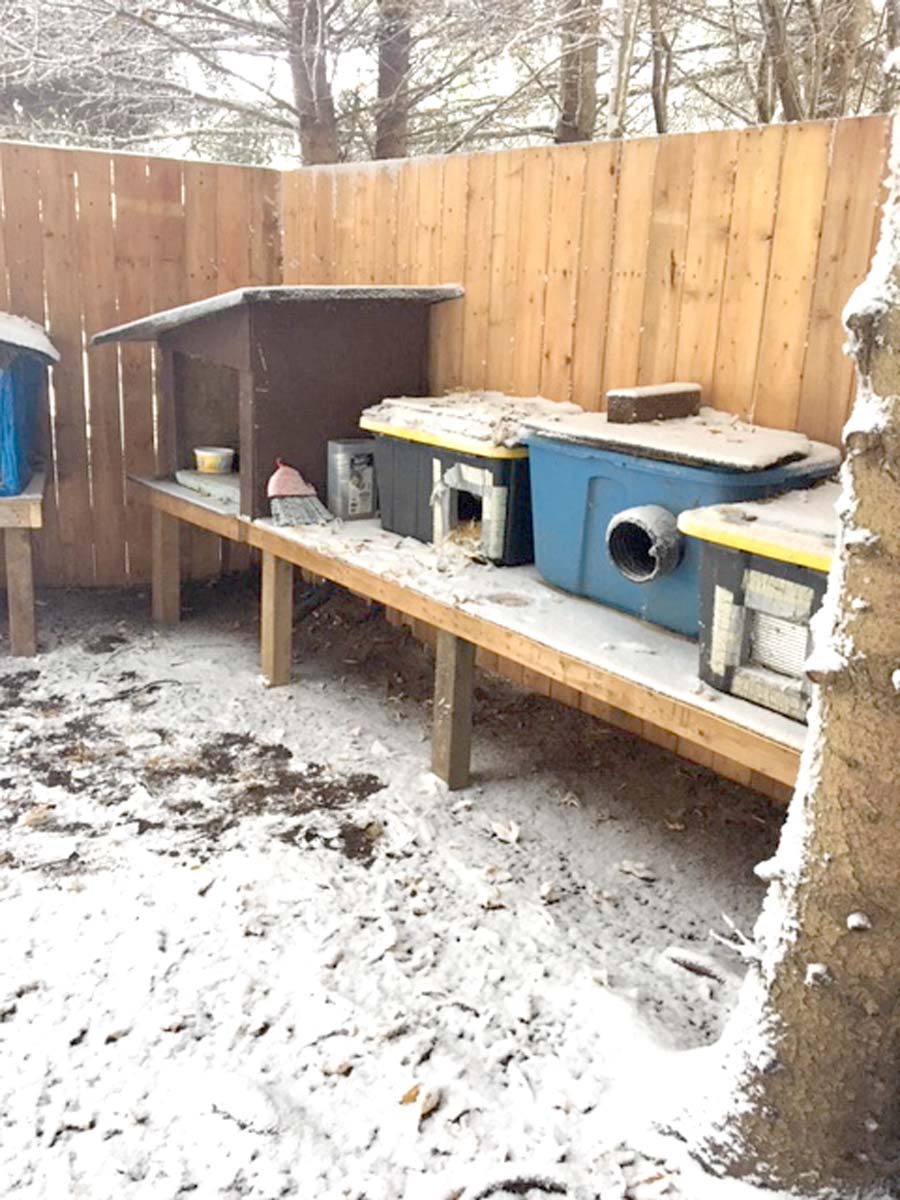 Cat lovers - Harriston business owner John McVicar and some neighbours have set up a shelter and care for a colony of feral cats in the woods behind his Listowel home.
Submitted photo

MINTO – A local business owner who helps take care of feral cats in his home community is urging others to do the same.

In a presentation to Minto town council on Nov. 5, Harriston Superior Monuments owner John McVicar stated there are problems with feral cats in various parts of Minto and Wellington County. He said most residents don’t know what could or should be done about feral cats.

“I want residents of Wellington to know that there are people out there that are interested in solving a problem if they see one,” he told council.

McVicar said a colony of feral cats has been living in the woods, behind his Listowel home. McVicar, his wife and some neighbours have worked together to build a shelter with feeding stations to assist the animals. The group receives donations and food from individuals  and a local pet supply store.

McVicar said the group  is “solving a problem without government money.”

“We’re all for that,” commented Mayor George Bridge.

McVicar said some of the cats are pets that people drop off on sideroads because they don’t know what else to do with them and he wants people to know there are shelters that will accept unwanted pets or help out with low-cost neutering.

The group has also received help from the Feline Friends Network (FFN).

“When we began to realize that there was a feral problem in our neighbourhood … Those of us who love cats did some research and found FFN. Volunteers from that organization came to  Listowel to teach us the Trap, Neuter and Return program.  You trap them, you get them fixed, and you return them to their colony,” McVicar explained in an email.

FFN  also taught the group where to look for kittens when they found cat from the colony was  pregnant.

“We needed to find the babies and care for them to an age where they could be fixed and then given to friends and relatives,” McVicar pointed out, noting if the mother was able to hide the kittens and get them past an age of six or seven weeks, “they would end up as ferals and the colony would grow.”

McVicar said he often has people ask for advice on what to do about feral or unwanted cats.

“Even though I live in Listowel my work here in Harriston has caused people to come to me because they’ve heard what I do in Listowel and so I want the residents of Wellington to know there are ways to help with this problem.”

“This is definitely an issue in our community,” said councillor Judy Dirksen. “I think it’s an issue in our rural areas, but we don’t get quite as fussed up about it because it’s a rural area and we have a bit more room for this type of thing.”

Dirksen continued, “In the rural areas, I’m sure people drop off their animals because they say ‘There’s a nice barn over there. I’m sure they will be well looked after.’ And, I mean, there’s a limit to what we in the rural areas can accommodate too.”

McVicar says all the cats in his group’s Listowel colony have names and are neutered. Over the past two or three years,  the group, now a Perth County FFN chapter, has been working with the Kitchener branch of East Village Animal Hospital (EVAH) for vaccination and population control.

“We have taken 21 cats to be ‘fixed’ and to get their shots. We pay out of our own pockets for each trip to  Kitchener and then submit receipts from EVAH to our (FFN) head office in Stratford,” McVicar noted.

While the group works exclusively in Perth County, McVicar says anyone interested in more information on feral or unwanted animals is welcome to contact him.

Starting a new group in Wellington County “would be a wonderful goal to worktoward,” he adds.