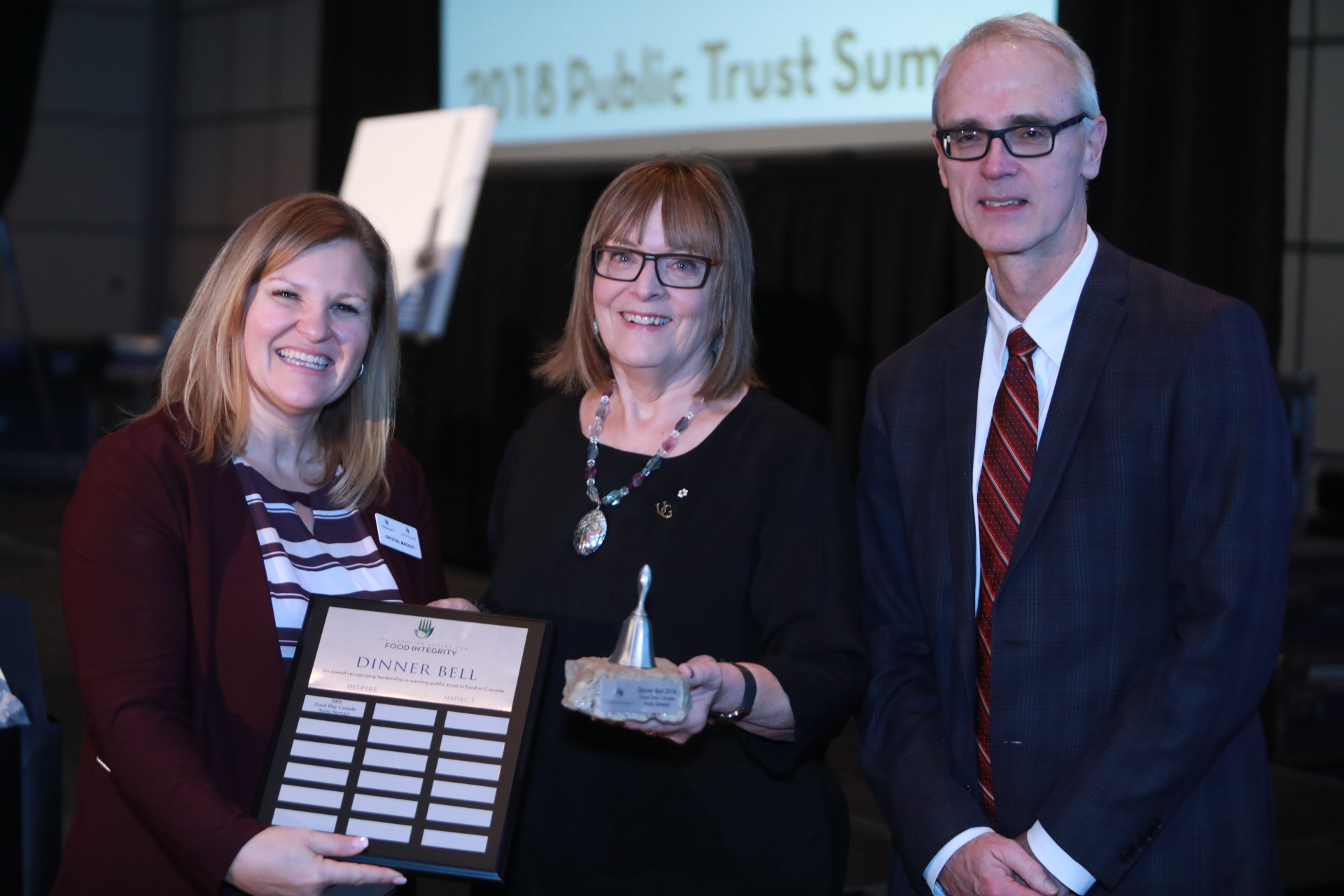 Presented at the recent  annual CCFI Public Trust Summit in Gatineau, Quebec, Stewart considers the award important “because it recognizes the connection of agriculture and culinary and the real food of Canada.

“That is what I’ve been chronicling for so many years.”

The CCFI, based in Guelph, created the Dinner Bell award to recognize an individual or effort that “breaks new ground in public trust in food with collaboration and leadership with meaningful impact.”

Celebrated annually across Canada every August, Food Day Canada brings together farmers, chefs and consumers to connect everyone in the food chain in a free, national event.

“In days gone by, the dinner bell was used to call people to tables of all varieties – from the fanciest castles to the most rugged ranches,” stated CCFI president Crystal Mackay.

“This new award takes the symbolism of the dinner bell from the past and brings it forward to recognize the leadership needed for the conversations about food for the future.”

“We have an amazing national leader right here at home in Wellington County,” Mackay added.

Stewart told the Advertiser her “culinary journey” has taken her across the country many times.

“I’ve met the producers and the researchers, the chefs and the home cooks, who’ve celebrated with me be it from the early days until now, when our entire country celebrates Food Day Canada,” she said.

“Those are the shoulders that we all stand on. Being the first ever recipient of the [CCFI] Dinner Bell award winner is a recognition of their work as much as it is my own tenacity – some say stubbornness – to tell their stories.

“Canada is food and the world is richer for it.”

Stewart noted the summit was “a really interesting bridge” of different communities, from agriculture to processing and beyond.

“I think that is particularly why I treasure this award,” she said.

Stewart added she enjoyed the summit because it provided a better idea of what big agriculture was doing across the country.

“We can feed the world if we choose to,” she said referring to Canadian agriculture.

“We are doing it well and ethically.”

She also noted “there is a lot going on” in Elora “in food terms particularly … it’s fun to watch.”

A member of the Order of Canada and Food Laureate at the University of Guelph, Stewart was the culinary awards advisor to the Governor General’s Awards in Celebration of the Nation’s Table. She has been recognized by many agriculture-food partners for her work in bringing the food industry closer to consumers.

In June 2009, she was inducted as an honorary lifetime member of the Canadian Culinary Federation of Chefs and Cooks.

She is the author of numerous books and has also appeared on CBC Radio One and her work has been featured in many publications.