MOUNT FOREST – Wellington Heights Secondary School (WHSS) teacher Ben McCabe was surprised when he learned he was one of Upper Grand District School Board’s Everyday Heroes for the 2019-20 school year.

He is the head of special education at the Mount Forest high school. 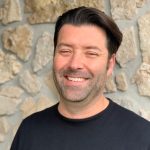 “I work with any of the students here who need support with their learning and run the special education department here,” he said.

Students and other teachers also submitted letters of recommendation.

Taylor said McCabe is the kind of teacher he wishes all students could have.

“He is kind, professional and knowledgeable to be sure, but he is also generous to a fault,” Taylor said.

“On top of his duties as head of special education, which he does an amazing job at, Mr. McCabe gives back to school every single lunch hour.

“He has hosted a social skills group and an Arduino Club in the resource room, allowing us to keep the resource room open to students five days a week … without his gift of time we could not do (that).”

And while that makes McCabe a good teacher, those are not the qualities that make him an Everyday Hero, Taylor said.

“What makes Mr. McCabe an Everyday Hero is what he did for music at WHSS,” Taylor said.

Last year there was a decline in music class enrolment, which lead to the cancellation of the class.

“So I offered a rock band program, so like a music program, to students as an extra curricular,” McCabe said. “It was fantastic.

“It was a lot of fun and we went and played over at Victoria Cross for the public school, played some tunes before Christmas and things like that.”

But it was more than just choosing to start a rock band program.

Taylor said McCabe sought out and secured funding for the program and acquired a class set of guitars and a drum kit.

“After this was done he also became the staff advisor to the new program.

“This meant that Mr. McCabe taught guitar on Fridays at lunch.”

“For many of the students this program became a highlight of their time at school,” Taylor said.

“It gave them a chance to express themselves through music. I could not estimate the number of hours Mr. McCabe gave to this project.

“I know that Mr. McCabe did for students what they could not do for themselves and for me that is the definition of an Everyday Hero.”

McCabe said the nomination also says a lot about other staff at the school.

“I mean, the fact that staff would take that time and do that is really humbling and also just the idea that, yeah, it’s validating,” McCabe said.

“It makes it feel like you’re doing something good where you work and the job you enjoy is having an impact.

“So it feels awesome.”

With all of the COVID-19 protocols in place this year, McCabe is unable to run a school-wide rock band program because students aren’t permitted to share instruments or use wind instruments.

However, he’s keeping the band alive with the special education class.

“We’re using bucket drums and things like that where we can all have our own equipment and not share,” he said. “So it looks different.

“I wish I could run it right now because it was a lot of fun.”

He does plan to bring the rock band back when protocols allow.

“We’re making this work but I think everybody wants to be back to more extracurriculars and more being able to offer things and just extend the school experience,” he said.

Also due to COVID-19, there will be no awards ceremony and all the Upper Grand District School Board Everyday Heroes will be receiving their awards individually.

“Hearing about it and talking with staff and getting those nice emails from parents, I think that’s better than the award.”