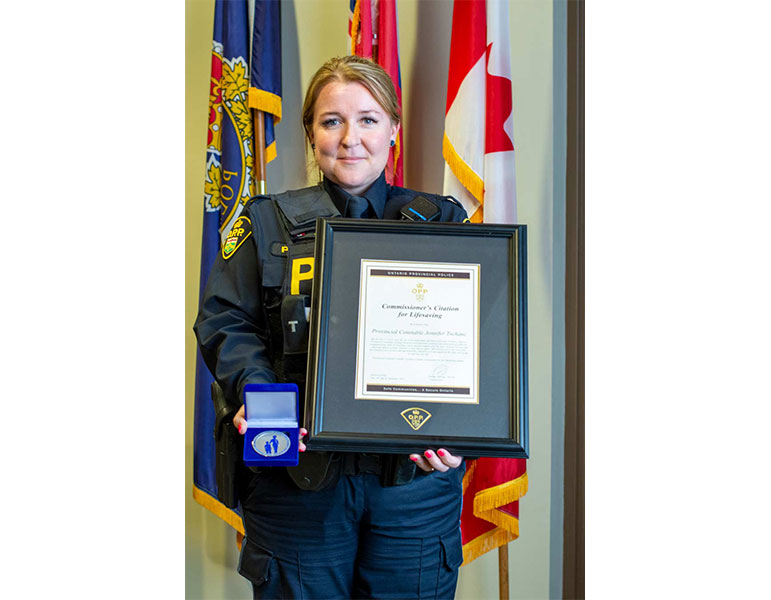 Awards - Ontario OPP provincial constable Jennifer Tschanz recently received a Commissioner’s Citation for Lifesaving and the Youth Foundation Award for her work with the OPP.
Photo by Jaime Myslik

She received the Commissioner’s Citation for Lifesaving and the Youth Foundation Award.

“It feels wonderful,” she said. “Anytime you’re recognized in any capacity it’s a wonderful thing.

On July 17, 2018 Tschanz was working as acting sergeant when a call came in at about 1:30am regarding a suicidal man on the St. David Street bridge in Elora.

“He was threatening to commit suicide and … he was going to jump and I believe that information came in through his ex-wife,” Tschanz said. “She was the complainant.

“He had been on the phone with her so she called our communications centre and that’s how we were dispatched to the location.”

Tschanz and her platoon attended the call and positioned themselves to give the man some distance.

“He was highly agitated,” she said. “We really had to execute a significant amount of patience and just really listening and it was rapport building with him.”

To do that, Tschanz said she stepped away and called his ex-wife to learn more information.

She learned that the man had recently lost his job, had been drinking and had a gambling problem.

“The financial situation was really dire for him and he’d been at a casino and I think lost some money,” she said.

The other officers on the team were keeping the man calm when Tschanz stepped in and tried to talk to him about different parts of his life, like his daughter.

When Sergeant Mike Dolderman, who also received a Commissioner’s Citation for Lifesaving but was unavailable for an interview, arrived on scene the man was back on the phone with his wife because he was angry she called the OPP, Tschanz said.

Then Tschanz asked to talk to the man’s ex-wife on his cell phone and he gave permission which gave her an opportunity to get close to him.

“Sergeant Dolderman and I approached and we were able to grab onto him and get him over back to the safe side,” she said.

As Tschanz walked up she said Dolderman started walking too.

“We just sort of nodded at each other and we knew that that was our only opportunity that we’d have really to get close to him to be able to get him to the safe side of the bridge,” she said.

The man was taken to the hospital and received the help he needed. Tschanz said he seemed relieved they helped get him off the bridge.

The key, she said, was focusing on de-escalation, listening and patience.

“And understanding … he is having his worst day,” she said. “Whatever incident has led to him being here, it’s bad and he is wanting to make a choice that could be permanent.”

In a press release officials said the platoon, “all displayed enormous patience, team work and demonstrated effective communication skills by building a much needed rapport with the victim, earning his trust and allowing them to be in a better position to help him to safety.

“This teamwork led to the successful de-escalation of a serious and unpredictable situation as it was very apparent that the victim was going to take his own life.”

During the school year Tschanz splits her time between all the elementary schools in Wellington County as the youth resiliency officer. She teaches a 10-week DARE (drug abuse resistance education) program to Grade 6 students.

She has been in the role for four years and has been in with the Wellington County OPP since 2013.

“The kids learn lots of great tools and strategies about problem solving and things that they’re going to face in the future,” Tschanz  said.

Through her work in the schools she learns what kids need some financial help and she can apply to the OPP Youth Foundation for assistance “to support youth in our communities for registration for team sports, class trips, it has to be something tangible and I rely on the youth foundation … a lot to help out our kids,” she said.

She has also secured funding for things like medications for youth, alternative educations programs, summer camps, and art programs.

She said the Youth Foundation knows her because she often makes requests.

“It’s wonderful,” she said of the award. “It’s wonderful to know that this little bit of work from me can really make and change somebody’s life.”

These are the first awards of recognition the 17-year-OPP veteran has received at the OPP West Region Awards Ceremony. However, being unable to attend the actual ceremony in September, Tshanz received the awards from the commissioner of the OPP and the director of the Youth Foundation on Nov. 26 at headquarters in Orillia.

“I feel like this is the best job I’ve had in the OPP,” Tshanz said. “I’ve loved my time in the OPP … for me it’s so amazing to see when I’ve supported kids that truly needed a little hand and you see them now thriving and doing so well or just having been able to participate in that school trip.

“Because their peer to peer relationships are so important and they’re really tricky for lots of kids and if you don’t have the financial means to pay for something, that can be really a hard thing for kids … they would never want to tell anybody that. So that’s why we kind of do this in the background.”

She said she thinks the relationships she’s building now will benefit the kids in the future.