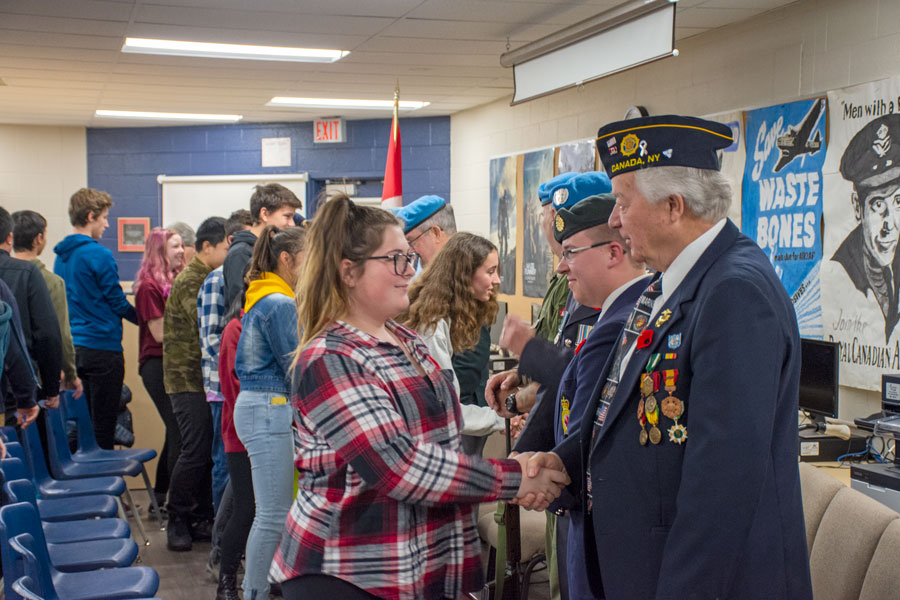 Veterans panel - Our Lady of Lourdes Catholic High School hosted its 11th annual veterans panel on Nov. 8. Grade 10 history students listened to the veterans talk about their service in the military. Students formed a line to shake hands and say thank you to the veterans at the end of the event.
Photo by Aryn Strickland

Ten veterans, whose service included the Second World War, the Korean War, the Vietnam War, the Canadian Woman’s Army Corp and United Nations Peacekeepers, came to the school to share their experiences with a group of about 150 Grade 10 history students.

The event is hosted every year to give the students “a sense of gratefulness for the sacrifice veterans made,” according to one of the organizers Paul Zuccala, head of Canadian and world studies.

“We are told it’s Remembrance Day, but until we meet a veteran, we don’t have cause to remember,” said Zuccala.

– Eleanor “Bobby” Freeman, who served in the Canadian Women’s Army Corps in WWII;

– Sergeant Michael Seitz, a UN Peacekeeper with the Airforce, served in Egypt;

– Sergeant David Noonan,  a marine in the Vietnam War; and

Each member on the panel spoke of their own experiences in the military.

“We all have horrible stories to tell … I’m not going to go into war stories today” said Noonan.

“I’m just gonna let you know I’m glad to be here and you’re the reason for all this. Enjoy your freedom; a lot of people paid for it.”

Ferris spoke about his experience with PTSD and the difficulty assimilating back into civilian life.

“What we try to get through to most of the students is the veterans are passing away at an unusual rate right now,” said Ferris.

“If you get the chance, thank a veteran and watch the smile that comes on their face. I did 13 years, it cost me my wife and children, because I spent an average of 47 days a year at home.”

Freeman talked about her experience in the Canadian Women’s Army Corps during WWII. Freeman was 17 when war broke out.

“Nobody had paid any attention to Hitler, he was gathering up an army like you never saw before. And all of a sudden, he declared war,” she said.

“We were all so scared that he was going to come over and take our beautiful Canada away from us. So we quit school and started building armaments.”

Freeman drove trucks and other military vehicles later in the war.

“We were to take over jobs, to release men for duty. And I was one of the first ones to get involved,” she said.

One of her clearest memories of the time was driving Churchill, Roosevelt and Stalin to one of the Quebec Conferences.

“I saw the big three and  I could touch Churchill … it was thrilling,” she said.

Freeman was overcome with emotion discussing the many Canadian soldiers that were lost during the war, including her brother.

“We lost so many people at Dieppe and other places. For the freedom that we have given you, we paid dearly,” she said, urging the students to do their part to maintain peace.

Following the panel, the veterans and students of Our Lady of Lourdes Catholic High School planted tulip bulbs outside of the school to recognize the upcoming 75th anniversary of the liberation of the Netherlands by Canadian troops.

The school received 75 bulbs from the Dutch government.

The tulips will be in bloom in spring of 2020 in time for the 75th anniversary.