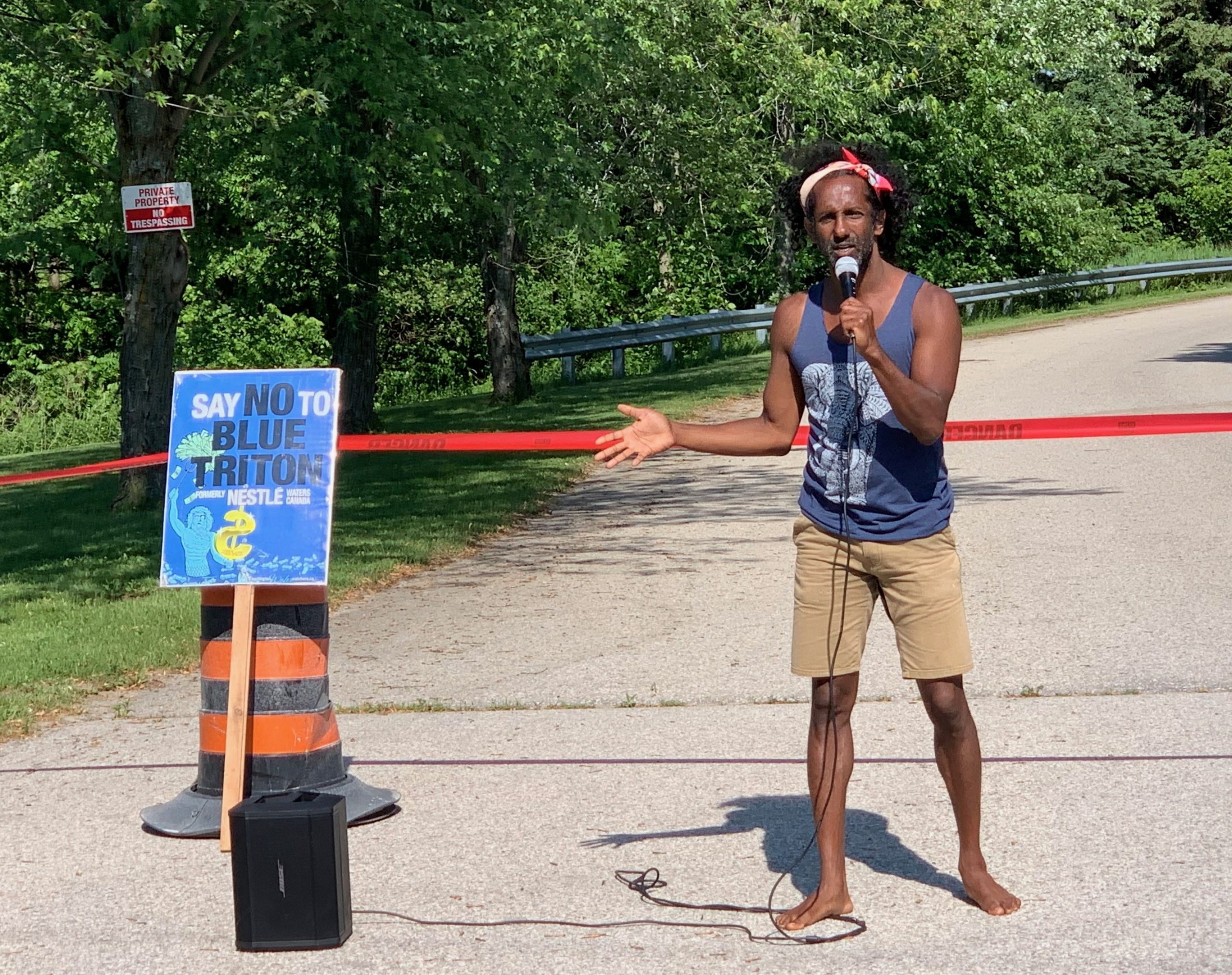 On June 11, Shane Philips concluded the first stage of his "Ear to the Groundwater" walking tour at BlueTriton's Hillsburgh well. Philips, along with the Wellington Water Watchers, teamed up on a weeklong tour throughout Wellington County to protest BlueTriton's application for water taking permits at its well locations across the county. Photo by Curtis Gordon

HILLSBURGH – Shane Philips, a local water activist and singer/songwriter, concluded the first stage of his “Ear to the Groundwater” tour on June 11 at BlueTriton Brands’ Hillsburgh well.

Throughout the week of June 7 to 11, Philips walked to all three wells in Wellington County owned by of BlueTriton (formerly Nestle Waters Canada).

“We still can’t see each other for the water in our blood,” Philips said.

“I’m walking for the simple issue of dignity – human dignity to have clean water.”

Philips, along with the Wellington Water Watchers (WWW), have been expressing their opposition to the company’s application for a 10-year extension on its permit to extract water from its wells in Aberfoyle and Hillsburgh.

BlueTriton also owns the Middlebrook well near Elora but officials say the company does not currently have plans to take water from this location.

On the days between his stops at the three wells, Philips walked through the day to arrive at his next location.

On June 8 he walked for seven hours from Guelph to Middlebrook Road in Elora, and on June 10 he walked from Elora to BlueTriton’s Hillsburgh well, where the tour concluded on June 11.

“A lot of people have come to Wellington County and to Guelph, which is putting even more burden on our water infrastructure,” Philips said.

“Water is a long-term issue, and it’s an issue that we can’t just push to the next generation. It’s too late by then.”

Philips called on the provincial government to put resources into making sure water is clean, and to ensure that Wellington County will have a future with water.

“Why can’t we provide jobs in building infrastructure for clean water right now? That would be my plan for a better future of Canada,” he said. 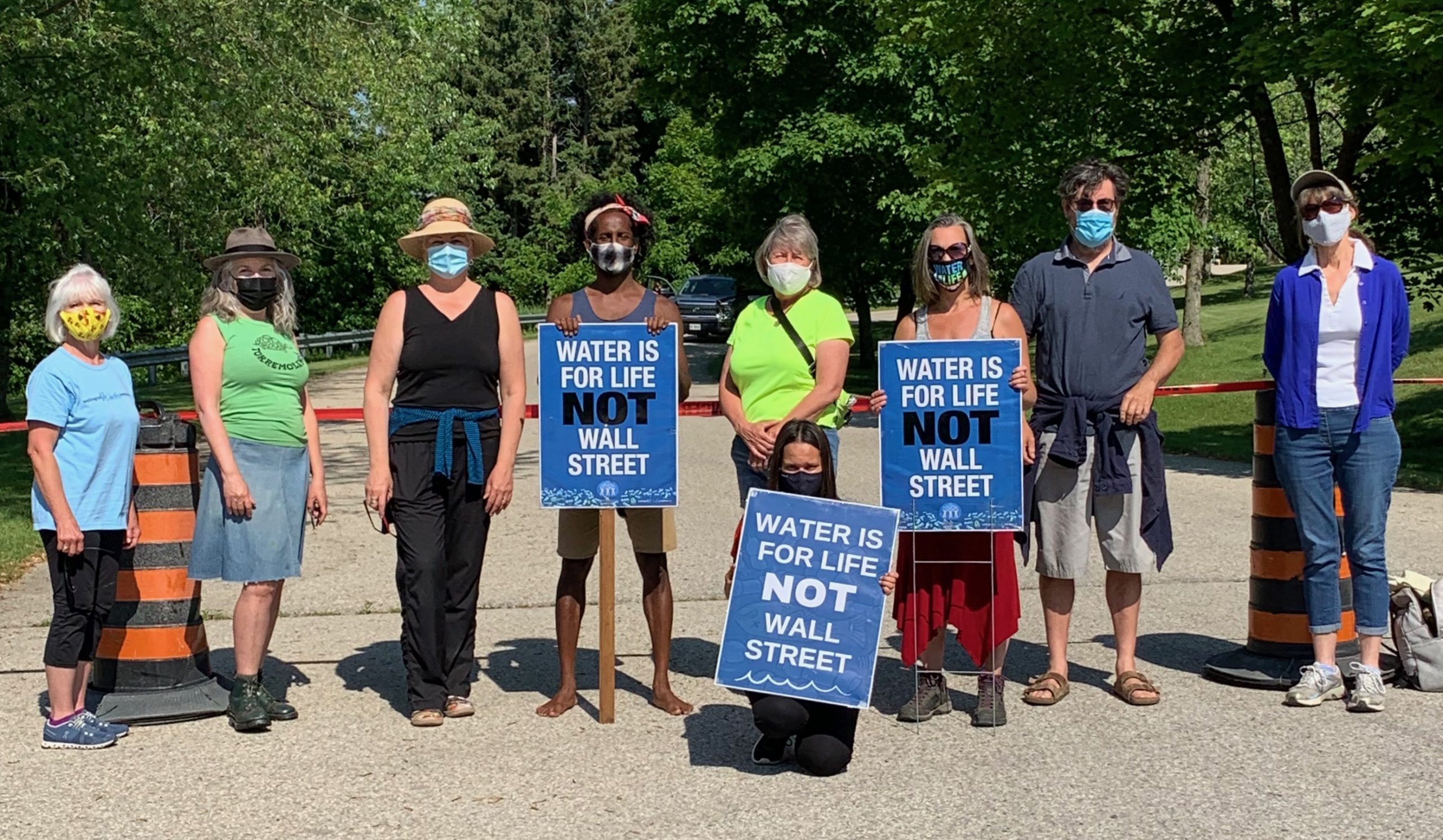 Shane Philips, fourth from left, with members of the Wellington Water Watchers. Photo by Curtis Gordon

Although the Wellington County stage of the Ear to the Groundwater tour has come to an end, Philips said he will continue his walks throughout southwestern Ontario.

“This campaign of the ‘Ear to the Groundwater’ will continue over the summer, once we decide on the priority of where I need to walk,” he told the Advertiser.

WWW executive director Arlene Slocombe said the Hillsburgh well is not necessary to BlueTriton’s business, and that it is important that the water remain in the ground and be conserved for future generations.

“Part of this specific walk is to drive folks to make a public submission comment on the ERO (Environmental Registry of Ontario),” Slocombe said.

“Comment periods for both this Hillsburgh well and Aberfoyle well are open until June 22. Anyone interested please find the links on our website and make a submission.”

Slocombe continued, “We just need this government to hear from as many people as possible that this is not something that is supported by our community.”

BlueTriton has said that they stand with the science and data that supports their permit applications.

Earlier in the week BlueTriton clarified that it had always been the company’s intention to continue to seek renewal of its permits for the Aberfoyle and Erin plants once the moratorium ended.

BlueTriton noted the Government of Ontario’s Science and Policy Review that was conducted in 2020 confirmed water takings for bottling purposes is managed sustainably and that there is no scientific justification for regulating water bottlers any differently than other water users.