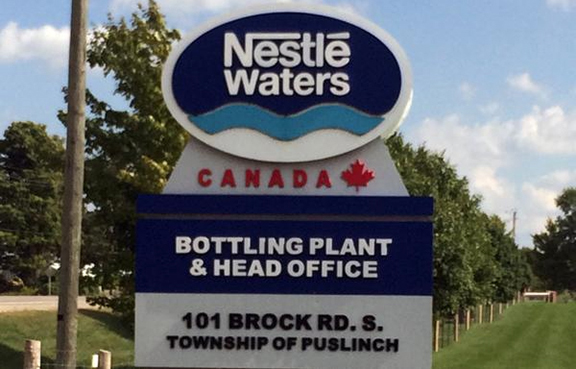 The Nestlé Waters bottling plant and head office in Aberfoyle has now been taken over by BlueTriton Brands Inc., a subsidiary of One Rock Capital Partners, which in February purchased the business from Nestlé Waters' parent company for $4.3 billion. Advertiser file photo

ABERFOYLE – Not much will change in Aberfoyle or Hillsburgh as BlueTriton Brands Inc. officially takes over water bottling operations from Nestlé Waters Canada.

And with the moratorium on water-taking permits now lifted in Ontario, officials there are eager to ramp up operations under the new name.

In an email interview, natural resource manager Adreanne Simard stated for BlueTriton, “It is business as usual as we transition.

“All Nestlé Waters Canada employees transferred over to BlueTriton Brands upon the close of the sale.”

Simard said she doesn’t expect hours of operation or truck traffic to change as a result of the new ownership. So, nothing should change for folks who live in proximity to the two facilities either.

“In this new chapter, BlueTriton will have a strong focus on spring water brands, and believe that we can connect with consumers in new and more relevant ways to convey the benefits of our products, while continuing to create value in the local communities in which we operate,” she wrote.

Simard said when the province put a moratorium on water-taking permits, it did allow for existing water bottlers to continue operations.

“We submitted a renewal request six months in advance of the original expiry date of the permits in 2016 and 2017,” she said.

“Our permits are regulated under the Water Resources Act and as long as we have submitted a renewal for these permits in advance of the expiry, we can continue to operate until the MECP (Ministry of the Environment, Conservation and Park) makes a decision on the renewal.”

When the moratorium was lifted on April 1, BlueTriton renewed the applications. Simard said BlueTriton has applied for the same quantities as when Nestlé was the operator.

However, the new regulations the MECP issued allow for 10-year permits, which BlueTriton hopes to obtain.

“The request is a straight renewal of the current permits. Same amount of water. We have requested 10-year permits. Our previous permits were five-year permits,” Simard said.

Arlene Slocombe, executive director of Wellington Water Watchers (WWW), a local water watchdog organization, said the group is scrambling to submit comments by the May 23 deadline after it learned of the company’s renewal application by accident.

She said WWW objects to the 10-year term and to bottling water in general, which commodifies water, depletes local municipal water supplies and generates plastic bottles which litter the planet.

As well, Six Nations, which she says has territorial rights to the land and the water, has not been consulted.

“Six Nations still does not have access to water, yet this company is extracting water for profit,” Slocombe said.

Simard said BlueTriton has no immediate plans for its Middlebrook well, located just outside Elora.

“At this point, we have no plans for Middlebrook other than to continue our long-term monitoring as we have been doing since we purchased the property,” Simard said.

Centre Wellington Township has declared it is not a willing host to water extraction there by any water bottling company and has plans to add more wells at Middlebrook to increase the municipal water supply.

According to the new regulations, that means BlueTriton can only extract 379,000 litres a day at Middlebrook.

“I don’t know if they’ll think it’s worth doing,” said Donna McCaw, a member of Elora-based Save Our Water, which is focussed on the Middlebrook well.

“The municipality is doing what it can to protect our water here. I guess the next move is with Triton.”