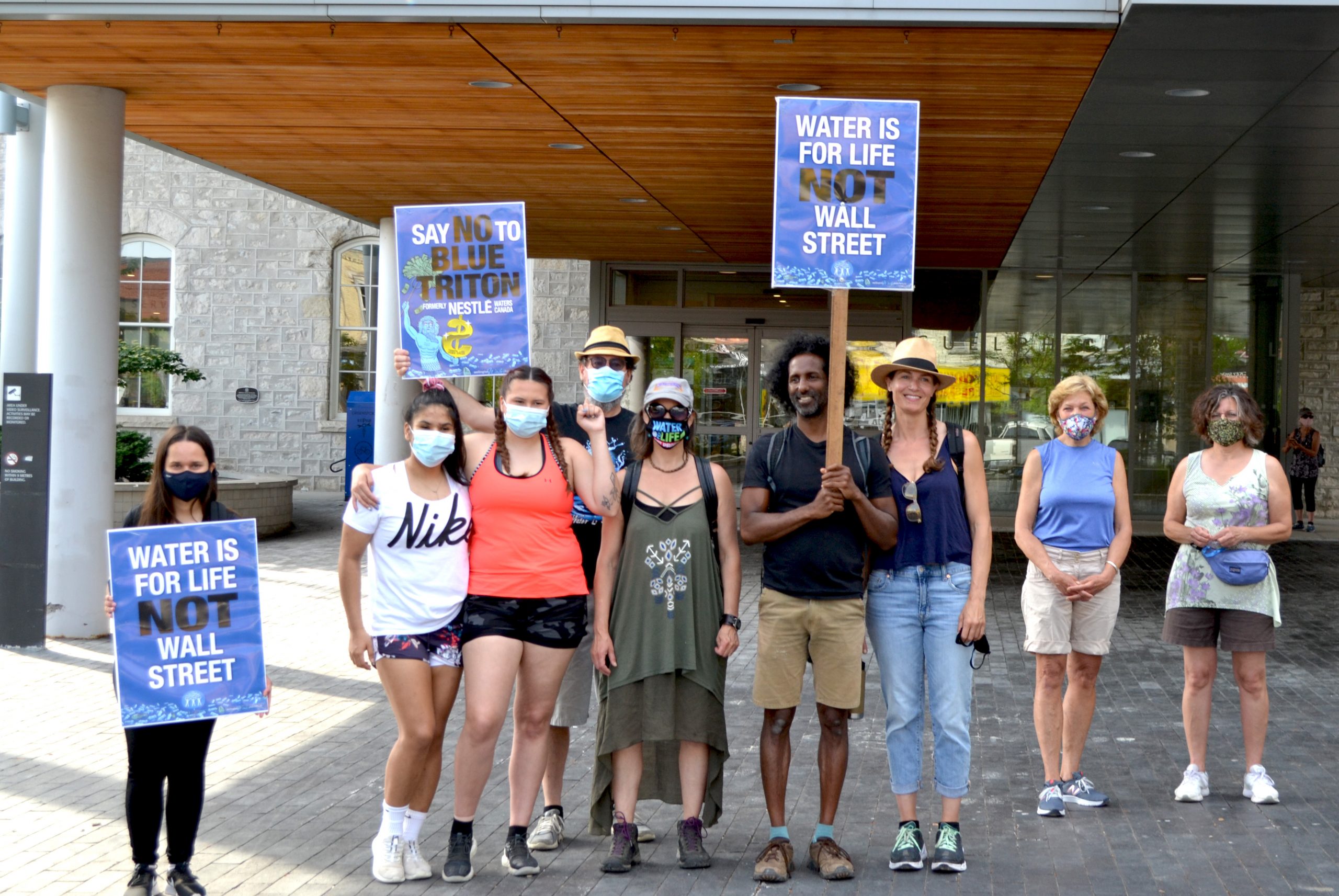 Shane Philips, fourth from right, led a walk through Guelph to protest BlueTriton’s application to renew its permit to bottle water for 10 years.
Photo by Curtis Gordon

On June 7 they participated in the first stage of Philip’s “Ear to the Groundwater” tour: a walk from Guelph to BlueTriton’s Aberfoyle facility.

A years-long moratorium on permits for water bottlers in Ontario ended on April 1 and BlueTriton has applied for a 10-year extension of its permits.

WWW, a local water watchdog organization, has objected to BlueTriton’s application and also objects to bottling water in general, arguing it depletes local water supplies, is a “low-priority, waste-producing, fossil fuel intensive, unnecessary use of groundwater” that is extracted without the consent of First Nations.

Philips, a singer/songwriter from Guelph, led the walk on June 7 to the Aberfoyle bottling plant as part of the “Ear to the Groundwater” tour.

Throughout the week, Philips will also be walking to BlueTriton’s proposed Middlebrook well near Elora and to its Hillsburgh well to meet with local residents who are opposed to the company’s permit applications.

The walk to the Aberfoyle bottling plant occurred on the second anniversary of a cease-and-desist order issued by the Haudenosaunee Confederacy Council to Nestle Waters Canada.

Starting outside Guelph City Hall, the walk featured a stop on Gordon Street to unveil a new billboard that reads “Say No to BlueTriton – Water is for Life not Wall Street.”

Throughout Philips’ tour he will visit a number of communities in southwestern Ontario to learn about threats posed to groundwater by water bottling, aggregate extraction and development.

Philips has walked from Guelph to Queen’s Park in Toronto in previous years to show his public opposition to Nestlé Waters Canada’s water taking.

In an interview with the Advertiser, Philips said he believes water justice is a core issue in society that is not getting enough attention. He said protecting and providing a clean and safe water supply is the most basic fundamental issue of human life.

“The fundamental reason why I’m walking is equity and justice,” Philips said.

“If we don’t care about the basics of water, especially in our Indigenous communities, then I don’t think we’ll actually develop the empathy or compassion to do the other things when it comes to racial justice or housing or food justice, or job security.

“I just don’t think that’s possible if we don’t have that common denominator, which is water.”

“The environmental taking of water, the plastic that we produce, that is the environmental side of this issue. When it comes to plastic bottles, they’re producing garbage,” he said.

Philips said it is vital that communities do not allow companies to take from municipal groundwater supplies.

“Guelph is one of the biggest municipalities that just simply relies on the water beneath us,” he said.

“We can’t afford, as a community, to let these companies take the water beneath our feet. They’re essentially holding us hostage.”

Philips continued, “Drink your tap water. It’s the exact same water. People need to start coming together on this issue before we can start making strides on other issues.” 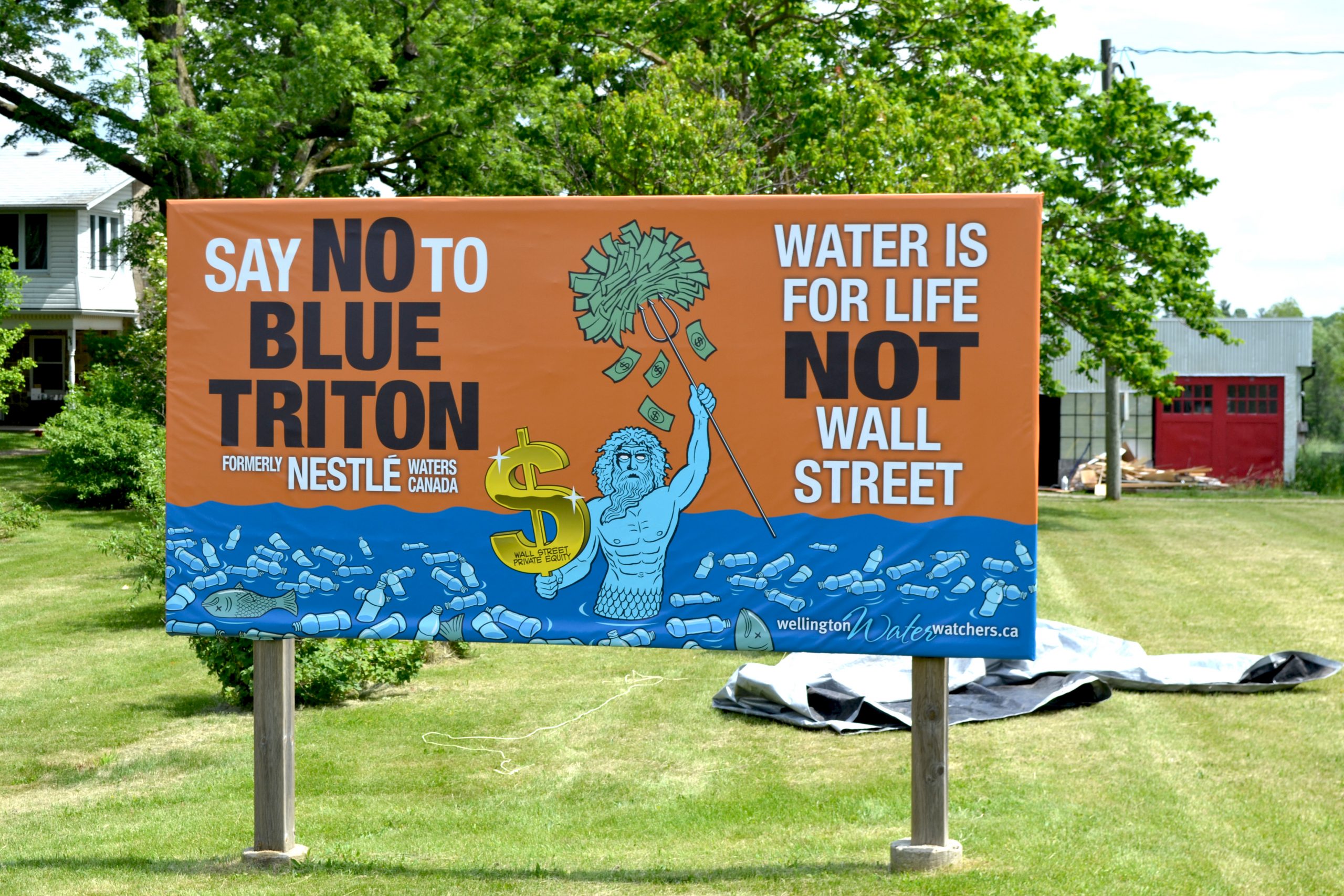 The new billboard on Gordon Street in the south end of Guelph, installed by Wellington Water Watchers, a local water watchdog group. Photo by Curtis Gordon

Philips said he was grateful to join with WWW on the walk.

“Wellington Water Watchers has been leading the fight for a long time. To have them back me up on this walk means so much … because to me, it’s a fight for my existence.”

Schreiner agreed municipalities need to ensure their supply of water is never compromised.

“We need to make sure that we prioritize water for communities and for people,” he said.

“The biggest thing is to make sure that we really review these renewals of water taking permits, especially now that it’s (BlueTriton) an equity firm and because there is a limited supply of water.”

“At this moment Triton is trying to renew the Nestlé permit that’s just been transferred to them,” Slocombe said.

“We believe it is a completely different context, and a different company. It’s not traditionally a water bottling organization. They are essentially a private equity firm.”

Slocombe said if BlueTriton is trying to renew its permits, then WWW is renewing its conviction in solidarity of the cease and desist order.

“We’re also renewing our call that these permits stop,” she added.

In an emailed statement, BlueTriton’s natural resource manager Dr. Andreanne Simard said the company, which is pleased to see its permit applications posted, stands with the science and data that supports their applications.

“We are proud of our long history of conservation, supporting the communities as an employer and contributor to local organizations, as well as maintaining open and transparent communications,” Simard said.

“We look forward to the opportunity to participate in the consultation process and encourage open dialogue.”

Simard noted it had always been the company’s intention to continue to seek renewal of its permits for the Aberfoyle and Erin plants once the moratorium ended.

“BlueTriton Brands supports policies in Ontario that are grounded in science and that have a fair, objective approvals process,” she said.

Simard added the Government of Ontario’s Science and Policy Review conducted in 2020 confirmed water takings for bottling purposes is managed sustainably and that there is no scientific justification for regulating water bottlers any differently than other water users.