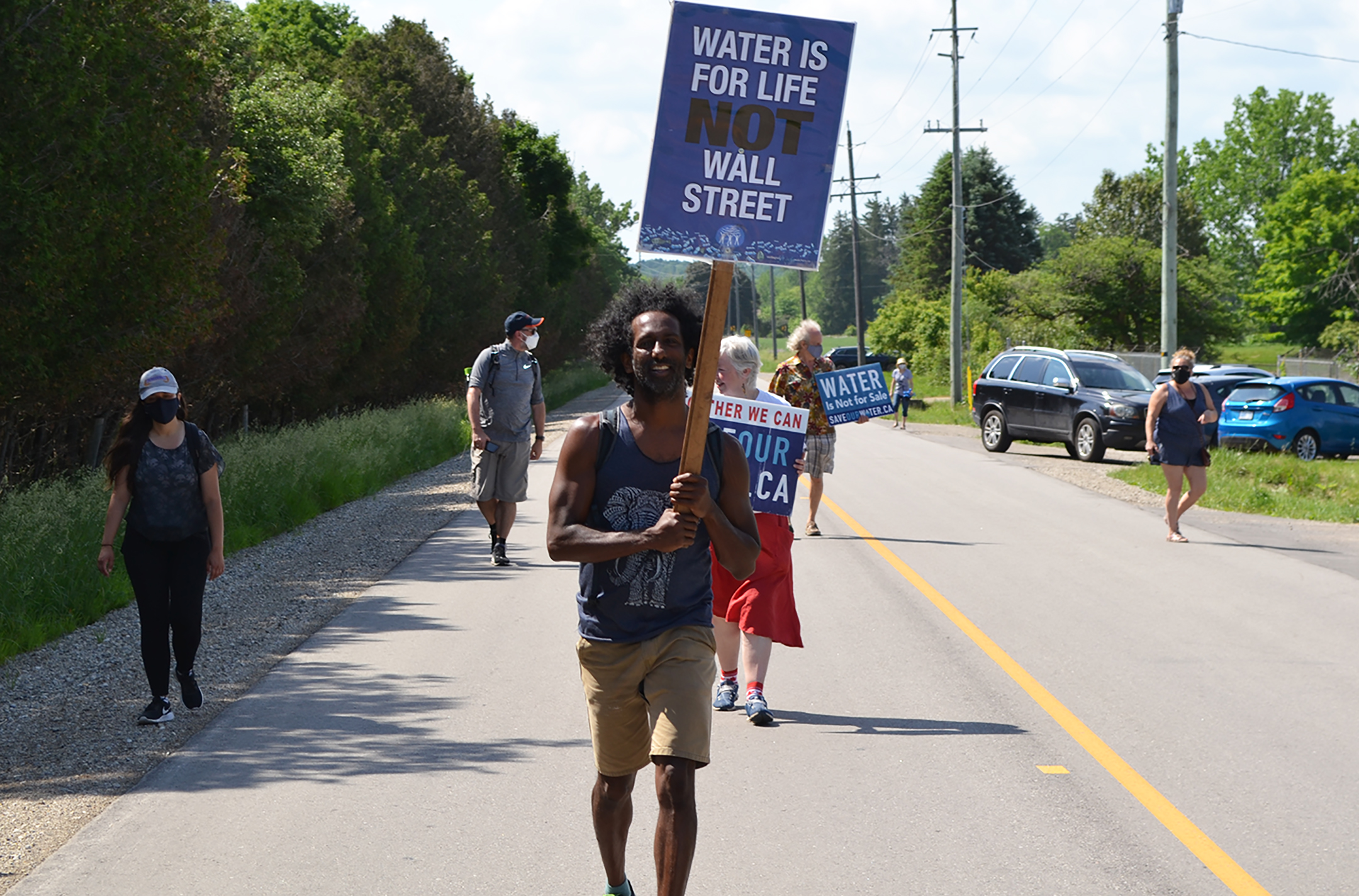 Shane Philips continued his 'Ear to the Groundwater' tour in Centre Wellington on June 9. Philips, along with the Wellington Water Watchers and Elora-based Save Our Water, are seeking to protect the Middlebrook well in Elora from water bottling companies. Photo by Curtis Gordon

CENTRE WELLINGTON – Shane Philips, a local water activist, visited the Middlebrook well near Elora on June 9 on the second stop of his weeklong “Ear to the Groundwater” walking tour.

“The reason it was important to fight here is because we are above a well that’s already very endangered,” Philips said.

“The water underneath us is running out in Elora, and the province recognized that.”

Philips has been visiting a number of communities in the area on his tour to learn about threats to groundwater posed by water bottling, aggregate extraction and development.

He has highlighted the danger to local water supplies he says is posed by water bottling, as well as the crisis of plastic pollution and the need to take action to stop these threats.

Philips began his tour on June 7 in Guelph to protest BlueTriton’s applications to renew water bottling permits in Wellington County. There he was joined by members of the Wellington Water Watchers (WWW) a local water watchdog group.

On June 8 Philips walked for seven hours from Guelph to Middlebrook Road in Elora to tent overnight on the property of a supporter of Save our Water, an Elora-based group formed six years ago that seeks to protect the Middlebrook well from commercial water bottling companies.

The Middlebrook well was purchased by Nestlé Waters (now BlueTriton Brands) in 2016.

Philips is a singer/songwriter and Guelph resident who has walked from Guelph to Queen’s Park in Toronto in previous years to show his public opposition to water taking.

On June 9, Philips was again joined by WWW members as well as Save Our Water members. That leg of the tour focused on protecting the Middlebrook well from future water taking.

The walk began at the Middlebrook well. Philips led the group through Elora and into Fergus. They ended the day with stops at the offices of Wellington-Halton Hills MPP Ted Arnott and MP Michael Chong.

Under the Ontario Water Resources Act, any company seeking a permit to take ground water to produce bottled water in any municipality in Ontario is required to have the support of the local municipal council.

However, water bottling companies are still able to apply to take up to 379,000 litres of water per day without the municipality’s consent. 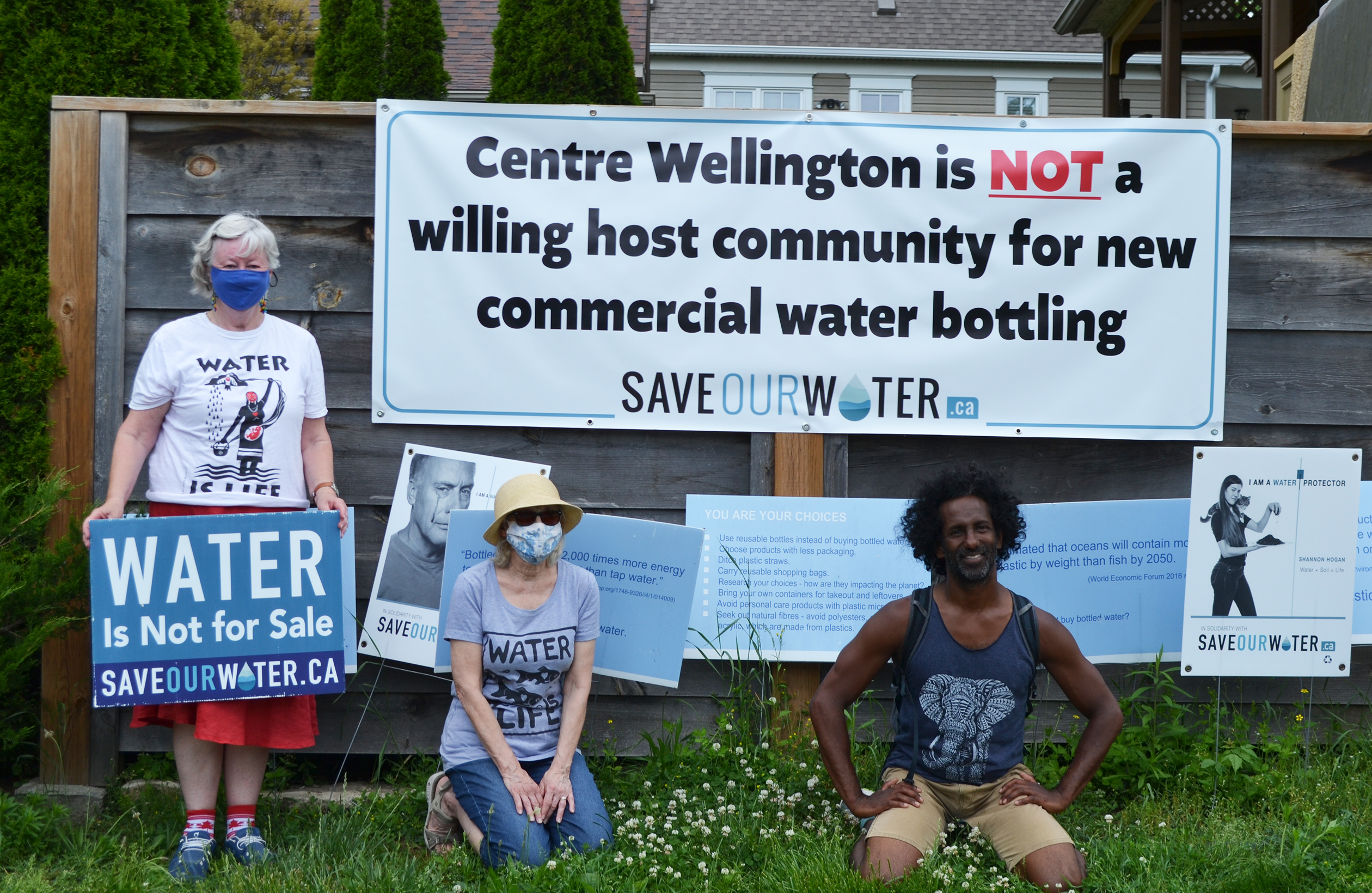 Donna McCaw and Jan Beveridge of Save Our Water, with Shane Philips. Photo by Curtis Gordon

Members of Save Our Water say that taking 379,000 litres of water per day would still put the township’s future water supply at risk.

Due to its expanding population – Fergus and Elora are expected to double in population by 2041 – Centre Wellington’s water supply is at significant risk and the township is in need of four new water wells, a report found – and the Middlebrook area has been identified as a prime location.

But Save Our Water members are still concerned.

“In other locations, outside of this area, it might make sense for a small business, not a huge multinational corporation, to take that amount of water,” said member Donna McCaw.

“But for this location, so close to where the best sites for municipal wells are, it makes no sense at all.”

McCaw said it is important that the township be able to put its four new municipal wells at the Middlebrook location.

“As a community it just makes sense not to have a commercial foreign enterprise stealing the water.”

In an emailed statement, BlueTriton’s natural resource manager Dr. Andreanne Simard said, “At this point, BlueTriton Brands has no plans for the Middlebrook well, other than to continue our long-term monitoring as we have been doing since we purchased the property.”

In an interview with the Advertiser, Philips said he views the fact that BlueTriton has not taken any water from the Middlebrook well as a significant win for Save Our Water and the people of Elora.

Philips congratulated Save Our Water and the township but cautioned things can still change if a new government were to come in and change water taking thresholds.

He said it is important that water is entrusted to the public at all times, and never to corporations.

“The water beneath us is being used by all of us, and we never know when it’s going to run out,” said Philips.

He is also encouraging people to never buy their water.

Philips will conclude his ‘Ear to the Groundwater’ walking tour on Friday, when he will visit BlueTriton’s Hillsburgh well.