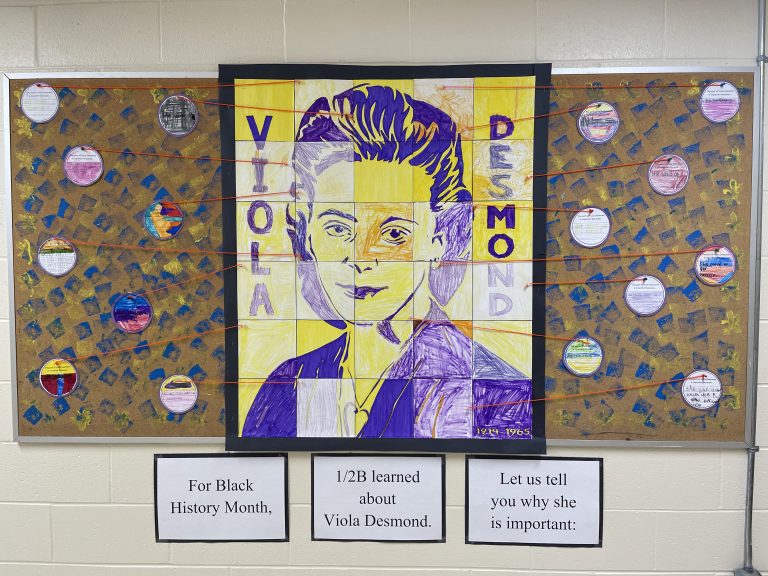 Elizabeth Newman’s Grade 1/2 class at Victoria Terrace Public School in Fergus was captivated by the story of Viola Desmond and produced this class project. Submitted photo

FERGUS – When students become engaged in a topic, Elizabeth Newman encourages them to dive in deeper.

And even though the idea of racism is complex and difficult for young students to digest, Newman’s Grade 1/2 class at Victoria Terrace Public School in Fergus was captivated by the story of Viola Desmond and her role in Canada’s Black history.

“But they loved how simple (Desmond’s) story is,” Newman said in an interview.

“She went to a movie theatre, she sat in a whites-only area and she went to jail. Even though they are young, they could make that connection.

“They can see what’s truly wrong with the scenario.”

Desmond was a Black businesswoman living in Nova Scotia.

In 1946 she refused to leave a whites-only area of a movie theatre and was later convicted of a minor tax violation as the seat she sat in cost one cent more than the one for which she paid.

She was prepared to pay the extra penny but the theatre would not allow it and she was dragged out of the theatre by police.

Her case was well-publicized and was an early impetus to the Black civil rights movement in Canada.

“I wasn’t too sure what they would grasp from the story and it was absolutely amazing to see these little ones react to it,” she said.

“It’s been rewarding to have these deep, meaningful conversations.”

Students each coloured a section that together formed a portrait of Desmond. They also wrote down one thing they felt was important about Desmond’s life.

Comments included messages like, “She sat down so that other Black people today can go to the movie theatre,” “She had her voice heard,” and “She stood up for herself.”

Their work hangs in the hallway of the school.