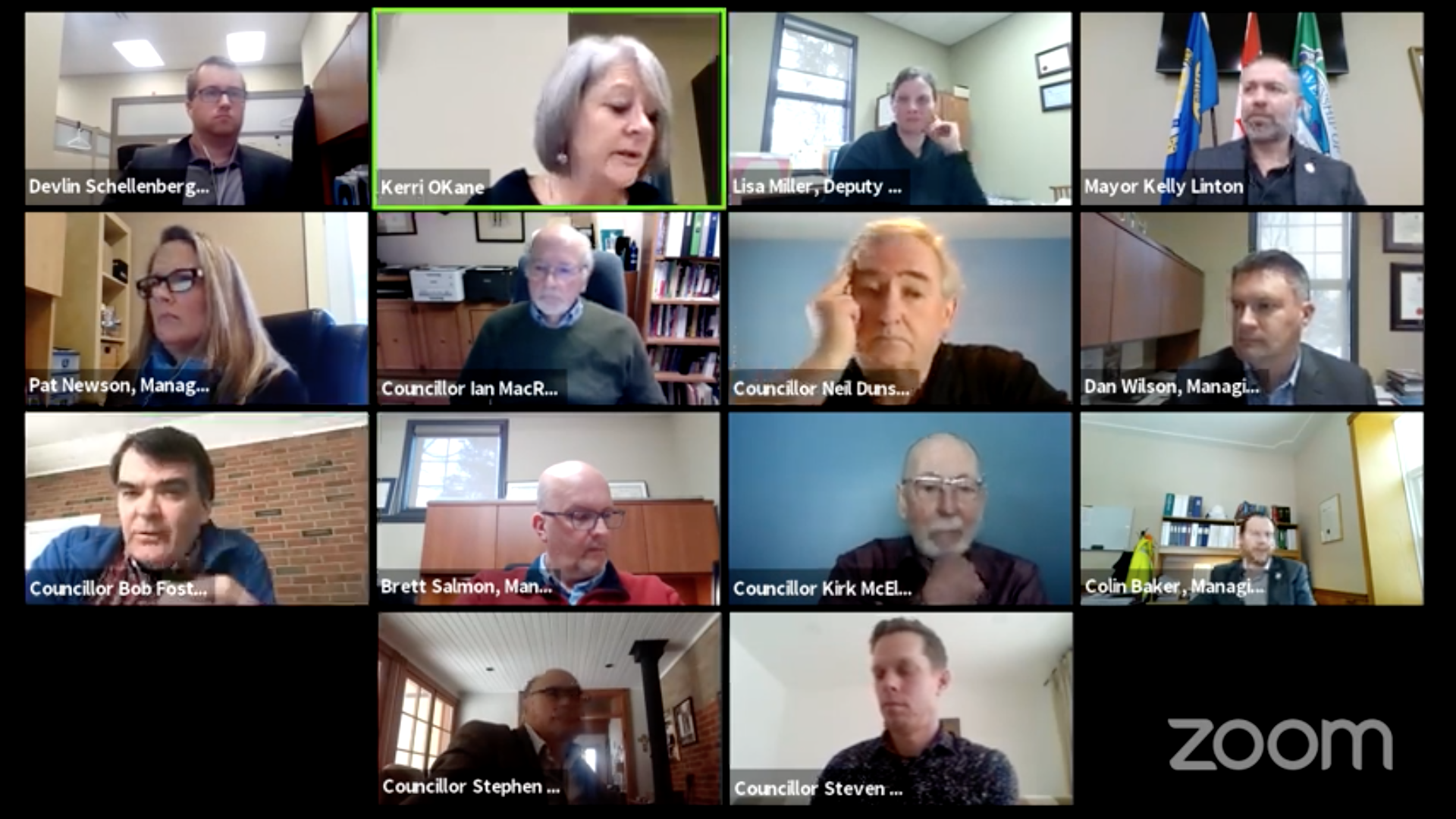 ELORA – Councillor Steven VanLeeuwen is no longer deputy mayor of Centre Wellington and councillor Neil Dunsmore will take his place.

Council decided at its Feb. 22 meeting to remove VanLeeuwen from the position and to ask the township’s integrity commissioner to investigate whether VanLeeuwen had breached council’s code of conduct or has a conflict of interest under the Municipal Act by joining the “End the Lockdowns Caucus.”

The caucus is a group of politicians speaking out against public health measures put in place to protect the public from COVID-19.

VanLeeuwen has said he joined the group after hearing stories from individuals and businesses experiencing stress and anxiety and reduced income as a result of the lockdowns.

He said he believes businesses and churches should be allowed to re-open without any restrictions and that there are better ways to protect the elderly from the disease.

In a photo taken outside the township when stay-at-home orders were in place, VanLeeuwen is seen standing shoulder to shoulder with other caucus members, indoors, without masks.

Council had decided at the committee of the whole meeting on Feb. 16 to defer a decision to remove VanLeeuwen as deputy mayor pending a report from the integrity commissioner.

Dunsmore brought the matter back to Monday’s meeting by saying he believed council had made an “error of judgement” in “punting” the decision to the integrity commissioner.

VanLeeuwen was elected to be a councillor and he will face the consequences of joining the controversial group with voters at the next election, Dunsmore said.

“But the deputy mayor is different,” he said. “It’s appointed and the mayor and deputy mayor need to be on the same page.

“As a council, we agreed to follow science and follow public health. This was our opportunity to lead and we chose to punt it.”

Dunsmore called VanLeeuwen’s beliefs “dangerous” and questioned what VanLeeuwen would have said at the opening of the mass vaccination centre in Fergus last week if the mayor had been absent and he had to step in.

“Would (Steven) talk about social distancing and masking, or would he repeat his anti-mask statements?” Dunsmore asked.

“An organization that believes in no masks and no restrictions is dangerous.”

VanLeeuwen reiterated his belief that lockdown measures are more harmful than COVID-19 and that there are other matters to consider in this emergency, not just public health.

But he said he would accept the decision of council on the deputy mayor position.

“The motion to remove me as deputy mayor is a decision of council,” he said.

“It’s interesting it comes when so many voices are crying out for help.”

Discussion around the virtual horseshoe became fiery when councillor Bob Foster put forward a motion to remove VanLeeuwen from the position and ask the integrity commissioner to investigate.

He suggested that not conducting a full investigation is akin to a cover-up.

Foster also made mention of two emails VanLeeuwen sent to councillors in September and December where VanLeeuwen expressed his personal beliefs about the lockdowns.

“The mayor could have nipped it in the bud,” Foster said.

“To decide to remove him without an actual report is backwards,” Kitras said.

This investigation could take 100 days or more, Linton said, and will likely uncover what Linton learned in a phone call to the integrity commissioner and conveyed to council – that VanLeeuwen can believe what he wants, and that council has the right to remove him from the deputy mayor role.

“I don’t support this (Foster’s motion),” the mayor said. “I won’t waste tax dollars to drag this out.”

VanLeeuwen said Foster had taken his emails out of context.

Dunsmore demanded an apology from Foster for suggesting some councillors were “covering up” something.

Councillor Kirk McElwain said he thought VanLeeuwen should be removed as deputy mayor and wondered why the OPP was not involved.

“I was frustrated with the fact that Steve and others chose to break the law and even provided photographic evidence yet the OPP is not involved,” he said. “Lesser people get fines.”

MacRae said he has had enough.

“I am very disappointed in us as a council. Here we were to discuss one question – whether or not we felt councillor VanLeeuwen should remain as deputy mayor. And all I’ve listened to is a lot of little games,” he said.

He continued: “Really, I just look at all of us and say shame on all of us. This has just gone too far and it’s gone on for two years and I’m really sick and tired of the games.”

When it came time to vote, Linton and Dunsmore both said they had hoped to separate the two parts of Foster’s motion – to remove VanLeeuwen as deputy mayor and initiate an investigation by the integrity commissioner – as they were not in favour of an investigation.

But that didn’t happen.

So, the motion carried, with Foster, McElwain, Dunsmore, MacRae and Linton voting in favour and VanLeeuwen and Kitras abstaining from the vote. Abstaining counts as a vote against.

Video of the meeting can be watched on the Centre Wellington Township website.