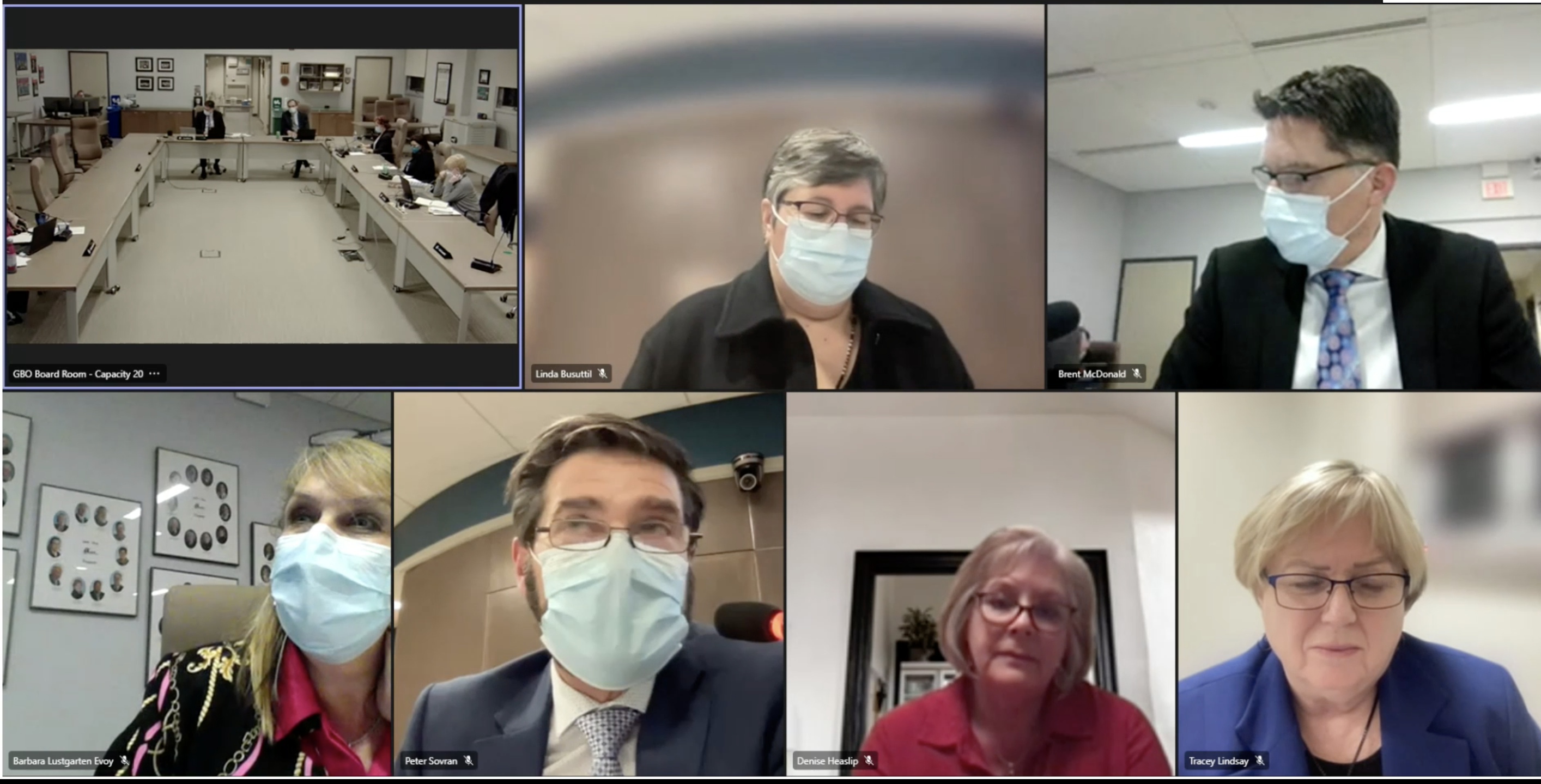 Upper Grand District School Board trustees are frustrated by the board's lack of authority to impose a mask mandate.
(Screenshot from March 22 meeting)

GUELPH – Trustees at the Upper Grand District School Board (UGDSB) are frustrated with the board’s lack of legal authority to impose a mask mandate.

In a March 22 board meeting, one day after Ontario lifted its mask mandate in most public settings, including schools, trustees seemed upset the province and Ministry of Education will not allow the board to keep its current masking policy in place.

And trustees weren’t the only ones frustrated.

In a delegation to the board, Andrea Chittle, a family physician in Guelph, also voiced concerns over the mandate being lifted, asking the board to support universal masking in schools.

“We have a legal binder against us right now,” trustee Mike Foley responded.

“I’m just speechless about our inability to move forward in this area.”

Later in the meeting, during the board’s monthly COVID-19 update, trustee Barbara Lustgarten Evoy asked why the board can no longer implement its own mask mandate.

Director of education Peter Sovran said the board works under a complex legislative framework and cannot make its own policies.

“We are governed by the Education Act and the various regulations associated with that act and so we must abide by that, including the direct powers associated to the Ministry of Education,” he explained.

“Any direction that comes to the ministry, the board is required to follow.”

In response, Foley put forward a motion asking that the board “strongly recommend masking in our workplaces and schools and that we work diligently with our education stakeholders and partners to make sure that message gets across to everybody.”

The motion was carried.

During the meeting, trustees also voted to rescind an August 2020 motion that allowed the board to put in place a mask policy.

While the motion was passed, some trustees took a moment to voice their position on the lack of a mask mandate.

“It would be an understatement to say that I am disappointed by the Ministry of Education and the chief medical officer of health directive,” Foley said.

“While I understand the legislative context of Ontario school boards, I am frustrated by our lack of legal authority to establish a masking policy and to be able to enforce a policy.”

He added the provincial government ordering school boards to rescind masking policies is irresponsible and will likely result in an increase in COVID-19 cases in local communities.

Trustee Martha MacNeil said the province’s order has “taken away my ability and my colleagues’ ability to vote for what we feel is best for the Upper Grand District School Board.”

She added, “If I were able to vote with my conscience tonight, making the best choice for all members of our UGDSB educational community, I would absolutely be voting to maintain our mask mandate because I believe the scientists and medical experts who say it is too soon.”