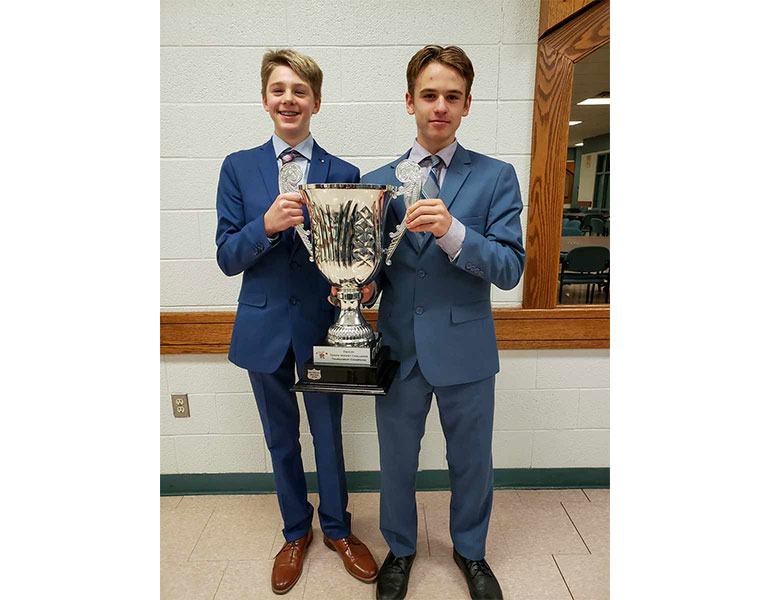 Cultural exchange - Ryan McDougall, left, and Fraser Clark are part of the Waterloo Wolves Minor Bantam AAA team that won The Toyota Hockey Challenge on Nov. 30. They will be travelling to Japan in March.
Submitted photo

FERGUS – Two local hockey players will be traveling to Japan in March with their Waterloo Wolves Minor Bantam AAA team.

Ryan McDougall and Fraser Clark, both 13, moved on to AAA hockey more than four years ago, after starting out with the Centre Wellington Fusion at age four.

McDougall, a Grade 8 student at John Black Public School in Fergus, has been playing with the Wolves for four years. He plays defence.

Fraser Clark, a Grade 8 student at Elora Public School, is playing his first year with the Wolves, but was on the Guelph Griffins AAA team for four years before making the move. He plays centre.

On Nov. 30 the Waterloo Wolves Minor Bantam AAA team won the chance of a lifetime – The Toyota Hockey Challenge.

Toyota annually offers 13- and 14-year-old hockey players from Canada and Japan the chance to experience one another’s culture.

This year, AAA Minor Bantam teams from Cambridge, Kitchener and Waterloo played a round-robin series during regular season games. The Waterloo Wolves came out on top, winning three games and losing just one.

The series started in November, and culminated in the championship game on Nov. 30 at The Aud in Kitchener between Waterloo and the Kitchener Jr. Rangers.

McDougall and Clark said there were close to 2,000 spectators in the stands when they skated onto the ice at the beginning of the game.

“You kind of know that there’s going to be that many people there, but until you actually see how packed the stands were …” McDougall said.

And the game wasn’t easy.

After Kitchener scored early in the game, McDougall said the last couple of minutes of regulation time were “nerve-wracking because it was the third period, with five minutes left, and that’s when we scored to tie it up (1-1).”

Down a player due to a penalty, the Wolves tied the game with about 4:45 remaining in regulation time.

“We’ve come back from … a deficit of one in the third period before,” McDougall said.

The championship game then moved into sudden death overtime. Neither team scored in the first overtime.

“We kind of knew that we were the better team going into this and the last game we played them we kind of beat them pretty bad,” Clark said.

The second period of overtime saw four-on-four play and the Wolves scored five minutes in.

“We hopped the boards and skated down and dog-piled,” Clark said.

“And threw off our helmets and gloves,” McDougall added.

Not only had they won the game, but they won an all expenses paid trip to Japan.

Clark said he was a bit more excited about the trip to Japan than the win, but  McDougall said, “If we didn’t win then we’re not going to Japan.”

So on March break the team will be jetting off to Japan to participate in cultural touring, meet the Tomakomai All-Star Team and play a couple of hockey games in Hokkaido.

“It’s still competitive but it’s not like (the) finals game seven, Stanley Cup,” Clark said. “It’s just we’re friends with them throughout the week so you’re just out there having fun.

“Hockey is supposed to be fun, but sometimes you have to simmer down the fun and just play hockey, go score.”

McDougall added, “If we lose it’s not that big of a deal.”

The team leaves on March 17 and returns March 23.

McDougall said he’s looking forward to “being able to go on a trip and try a different culture that we might not be able to get the experience here.”

“I’ve got to get used to sushi,” he said, adding he’s looking forward to trying to learn the new language, too.

The trip marks the 12th year a team from the tri-cities has travelled to Japan.

The event is paid for completely by the Toyota Motor Manufacturing Company.

“The Toyota Hockey Challenge started when the president from Toyota Manufacturing Canada and Toyota Japan got together and decided what a great idea it would be for a friendship exchange to take place,” the tournament website states.

In 2021 the Tomakomai All-Star Team will travel to Waterloo to play the Waterloo Wolves AAA Minor Bantam hockey team.