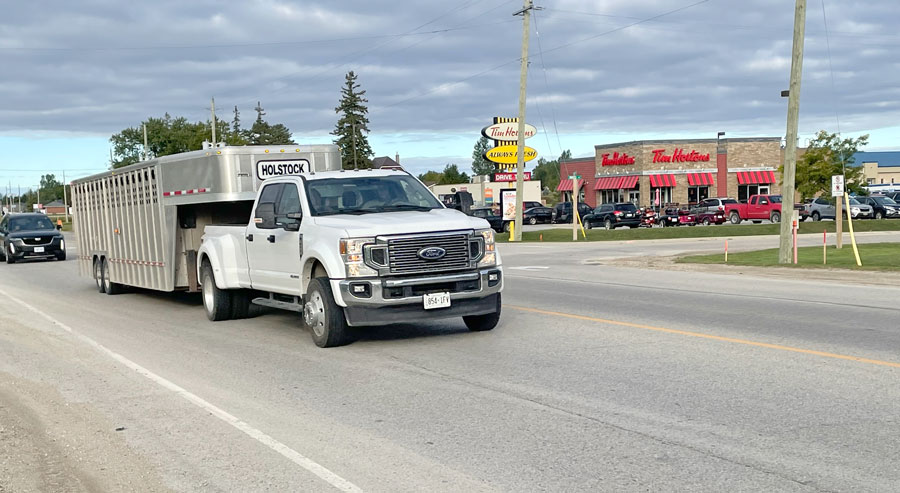 Concerns about pedestrian and cyclist safety near a busy commercial/industrial area of Palmerston were expressed in a recent letter from a local resident to Minto town council. Photo by Patrick Raftis

PALMERSTON – A Palmerston resident has expressed concerns about traffic safety here and municipal officials say the issues are on their radar as well.

In a letter to Minto council, Paul Frayne asked council to address the lack of walking and cycling connection to the industrial area and Tim Hortons restaurant on Palmerston’s west end and the issue of speeding through the community.

“There is currently no safe way for a walker or cyclist to get from any other part of town to this important area,” Frayne states in his letter.

Also, Frayne adds, “There is no safe way to cross Main Street where King meets Main. Speeds are dangerous, there are no sidewalks on the north side of Main in that area.”

Frayne asked if there had been any discussion about building a multi-use trail in a proposed housing development adjacent to the industrial park/Tim Hortons area.

“Palmerston is uniquely walkable and bike friendly due to Lions Park and our quiet local streets, but, the town is missing this final connection to this important area,” Frayne said.

Frayne also expressed concern about the speed of traffic on Main Street travelling through Palmerston.

“As an avid walker and cyclist in town I notice excessive speeds often on Main Street. The fact that the county has now selected this stretch of road as a community safety zone (where fines for traffic violations are increased) shows that this issue has been discussed before and that there is agreement that something needs to be done to improve the safety of this road,” he noted.

To slow traffic and enhance safety through Palmerston, Frayne suggested:

“One of the concerns he has with walkability up to Tim Hortons, we know we have it on our radar that once we do that road, we’re going to be putting sidewalks there,” said Bridge, who asked co-acting CAO Chris Harrow if there was a timetable in place for planned upgrades to Main Street, which is also Wellington County Road 123 through Palmerston.

“We’re preliminarily looking at the downtown dig for Palmerston, to start in ’25,” said Harrow.

“We still have a lot of engineering to do. We have to partner with the county because it’s their road and, quite frankly, it’s a very significant project. Preliminary estimates, we’re looking at $10 million to do that, from one end to the other … and that’s split with the county obviously,” Harrow added.

The CAO said the Palmerston Main Street reconstruction will be “one of the most significant projects” that the new Minto council will have to deal with after the Oct. 24 elections.

“We have to wait till we get some debentures to come off the books and we’re going to have to look at re-debenturing for this project and moving forward because it’s significant. Water, sewer, stormwater, sidewalks downtown, you name it, it’s all in that project,” Harrow told council.

“All three of our communities have major (road) access going through … especially your main streets,” noted Elliott, who suggested the town look into installation of more roadside speed measurement signs or other traffic calming measures.

“I would appreciate if we could have maybe our staff look into possibilities of finding things that might slow the traffic in our communities,” Elliott suggested.

“We’re always looking for ideas,” said Harrow. “We can definitely look at it in the budget for 2023.”

Councillor Jean Anderson suggested the town could request the county install one its Black Cat speed monitor units in the areas.

“Whether they can put a black cat in each of the communities for the time being? I’m not sure how they’re apportioned, but I think we can put a request in,” said Anderson.

“When we set up the meeting with the county to talk about the reconstruction, we can ask them about that stuff, too,” said Harrow.