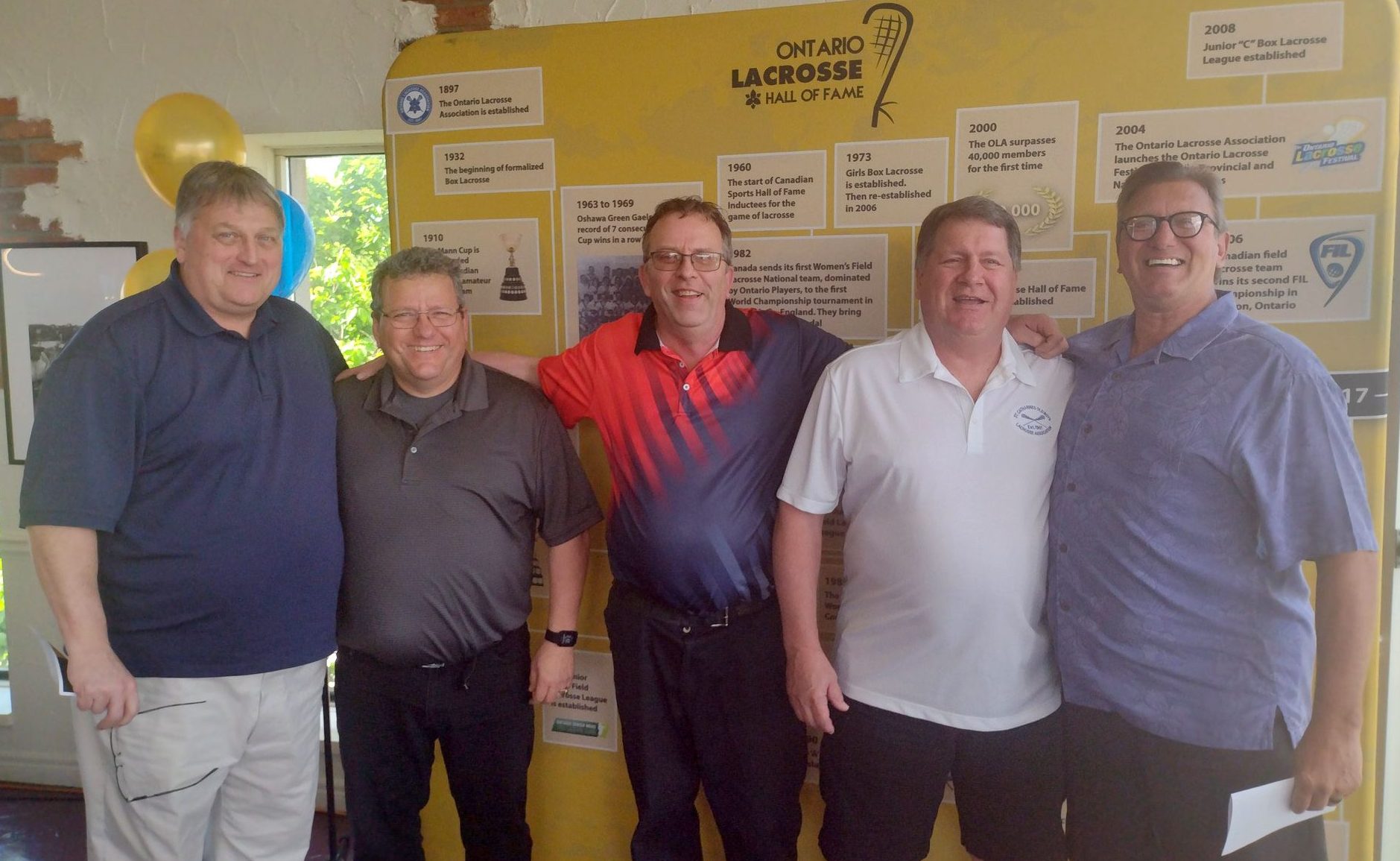 The Fergus Thistles Senior 'B' team from the mid- to late-1980s was recognized by the Ontario Lacrosse Hall of Fame on May 14. From left: Greg Hummell, Rick Wilson, Dan Sytsma, Kevin McNulty and Steve Pinchin. Submitted photo

FERGUS – The former Fergus Thistles Senior ‘B’ team is being recognized by the Ontario Lacrosse Hall of Fame for winning three consecutive Canadian Championships in the 80s.

The now-defunct Fergus team was recognized by the Ontario Lacrosse Hall of Fame during its 25th anniversary celebration in St. Catharines on May 14.

The Fergus Thistles, first established in 1857 and one of the oldest lacrosse clubs in Canada, were recognized for claiming three Canadian Lacrosse Association Presidents Cup titles in 1986, 1987 and 1988.

Dan Sytsma, who’s been involved in the lacrosse community in some capacity for 40 years, refers to these years as “the glory days.”

Sytsma said news of the team being recognized came about two months ago when he was approached by the president of the Ontario Lacrosse Hall of Fame.

“He approached me and wanted to ask me (about) some stories,” Sytsma explained, adding that during the Thistles’ three-peat run, the team “didn’t lose a game in the tournament(s).”

“It was a great feeling to be recognized in Ontario,” Sytsma said, adding he was surprised to get the call since there’s no team category in the Ontario Lacrosse Hall of Fame.

“It’s great that we’re recognized, but to cap off it all would be if we got into the Canadian Lacrosse Hall of Fame team category.”

Sytsma credited the success of the Thistles and finding talent to Mac Mason, who the Ontario Lacrosse Hall of Fame referred to as the “architect that kept the Fergus Thistles going through the 80s and 90s.”

Also recognized in the Canadian Lacrosse Hall of Fame in the “builder” category, Mason sold “Fergus” to the players, Sytsma explained.

He also attributed the Thistles’ success in those days to the small executive team that included Mason, Don McNiven, Bruce Disher and Sytsma.

“We were a hardcore group, we had to really dig into keep the team operating,” he said.

“It just goes to show you how we were a close-knit group together.

“Every team atmosphere, you tend to have sometimes two or three different groups and when the going gets tough, they don’t always gel at the right time.”

Sytsma said in those days it was difficult to compete with teams from larger centres in terms of attracting talent.

Given Fergus’ small population, Sytsma said the team didn’t have the same kind of money to offer the players coming their way.

“Back then we couldn’t survive to compete with the other teams on just local talent alone,” he explained.

“The only incentive we had we offered them $10 a win.

“Whenever you won a game you get $10 and the money from that was basically put back into the club.”

Some of the bigger teams, he explained, could offer players more money or an incentive to sign with them that was more appealing than driving up to Fergus.

“To get them up here the only thing we could pay them back then was 10 cents a mile and that was nothing, peanuts,” he said.

However, those that did come to Fergus were grateful for it, Sytsma said.

“They loved it up here, they didn’t complain a bit,” he said. “They made it to every practice and every game, they felt part of the team.

“There was no two or three separate groups on the team, we were a very close-knit team,” he explained.

“I think that’s the major contributor of how we won three Canadian championships in a row.”

The first two years the Ontario series went to seven games and the final year it went to six games.

“So that was a rivalry and people jammed that Fergus arena,” Sytsma explained. “It’s such a close-knit lacrosse community.”

The one year the team won the championship up in Owen Sound, a convoy of cars could be seen trailing behind the team bus on the way back, he explained.

“That’s the main thing, the fans,” Sytsma said. “A lot of fans could tell a lot of stories about those three glory [years].

“I call them the glory days of lacrosse.”