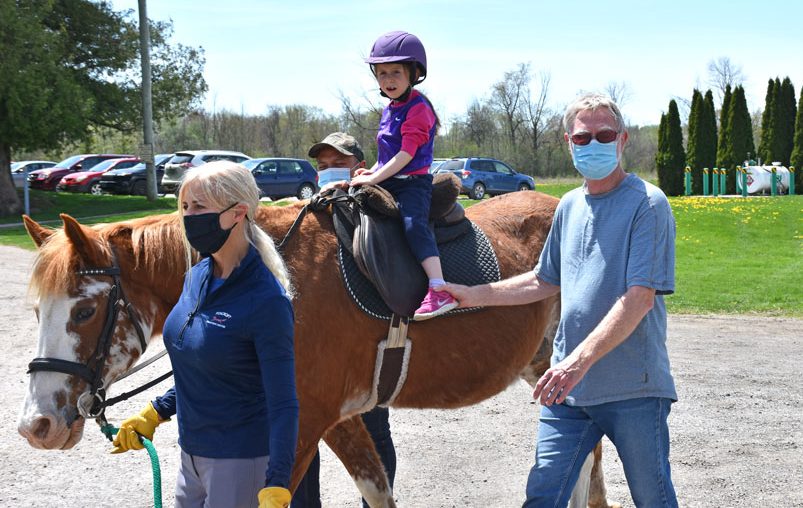 Lila Siasat is a young rider at Sunrise Therapeutic Riding and Learning Centre. She didn’t want to wear that helmet until Miami, the horse, walked out. Then she was eager to get riding. Photo by Joanne Shuttleworth

PUSLINCH – Sunrise Therapeutic Riding and Learning Centre is anxiously awaiting a decision by Puslinch council that could allow the non-profit organization to move ahead with its Supportive Affordable Housing and Respite Project.

At the May 4 council meeting, board president Ann Caine and steering committee chair Peter Cummins asked council to waive the cash in-lieu of parkland fees and also to endorse an alternate way to address the financial assurance provision in the site plan agreement.

Sunrise has big plans to build a new assisted living residential facility at its site on Concession 1 in Puslinch and this requires signing a site plan agreement with the township. These normally require the applicant to get a letter of credit or cut a cheque to the township as security, in case any damage is caused to township-owned property during construction.

Cummins said Sunrise has a 40-year history of paying its bills and avoiding debt, “but that means we have no credit history, so getting a $200,000 line of credit is impossible for us.”

He hoped council would approve an alternate way through the property tax process to provide those assurances instead.

“We don’t expect to start the project without the moneys in place,” he said.

And as Sunrise already has an adaptable playground on the site, plus a pool and acres of riding trails, he hoped council would waive the parkland obligation.

Council asked staff to get more information and the matter will return to council on May 25.

In the meantime, these are problems that keep Caine up at night.

She’s been at the helm since the beginning in 1982, when the therapeutic riding facility – for children and adults with physical, cognitive and behavioral special needs – had two ponies, a borrowed horse and donated space in a Puslinch riding stable.

It moved to four rented locations over the next 14 years before finally buying the 102-acre site where it is now located. 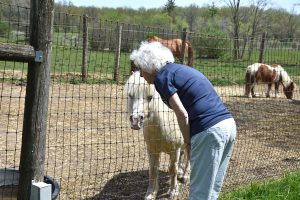 Ann Caine, president of the board of directors at Sunrise, visits with one of the miniature horses at the facility. Photo by Joanne Shuttleworth

And with several Trillium grants, financial and in-kind donations, the organization has flourished.

An indoor arena means Sunrise can offer both riding and grooming programs year-round.

There’s a memorial forest that honours those who have died and provides another opportunity for fundraising.

Many of the riders have attended Sunrise since they were children. In an interview at the site, Caine said many parents are beginning to worry about their adult children and what will happen to them when their parents die.

“That’s the urgency of the residential building. Many adults are still living with their parents, so this would be an option for them,” she said.

The proposed expansion project will include a new building with 14 private units for residents and six respite units.

It also adds a second arena where smaller classes could be held, and a larger, reconfigured grooming area to accommodate clients with walkers and wheelchairs. 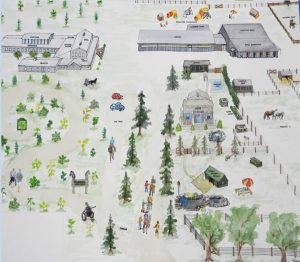 The large complex at the top left is the new proposed residential facility Sunrise hopes to add to its property in Puslinch. Officials are awaiting permissions from Puslinch Township for the project to go ahead. Submitted image

The estimated cost in 2020 was $8 million but Caine said she expects it will be more like $12 million these days, given inflation and the rising cost of just about everything.

“For two years we had no camps, no fundraisers, no volunteers were allowed. We had to lay off people and cut hours. And we still had the horses to care for.

“It’s been a really difficult time,” she said.

But donors have come through, she said. Volunteers are slowly coming back, and the clients and their families are clamouring for time at the facility.

“It’s been hard work, years of hard work,” she said, reflecting on the many challenges the organization has faced in its history.

“But it’s worth it. When I think of the thousands of children who have come to this site and gone through our programs, it has been incredible.”

In a world where timing is everything, Caine said she hopes the issue with Puslinch Township can be resolved on May 25. That would allow them time to get a few more ducks in a row for their June 26 fundraiser and some more behind-the-scenes work before launching their capital campaign.

“I’m proud of what we achieved in 40 years,” she said. “But we’re really leaning on our motto – dream, believe, achieve – for inspiration right now.

“We have the dream; now to achieve it.”