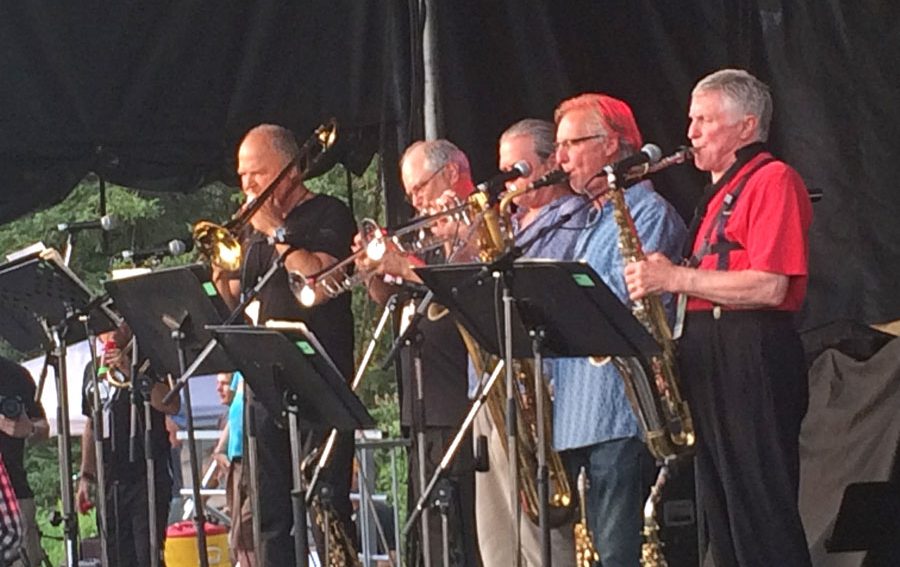 The Lighthouse horn section was part of what made Lighthouse so different from other rock bands. This photo of the horns was taken at a concert in 2015. From left: Russ Little (trombone), Alan Ralston (trumpet), Chris Howells (trumpet), Simon Wallis (Baritone Sax) and Steve Kennedy (tenor Sax). Photo by Brenda Hoffert

ELORA – We’ll apologize up front to any child or student of the ‘70s for the tune that’s soon to be stuck in your head, but Lighthouse is coming to Elora.

The Canadian band rose to fame in the 1970s with their hits Sunny Days, One Fine Morning, Pretty Lady, Hats off to the Stranger and more that won them a string of Junos and saw them touring around the world.

They’ll be playing at the Elora Legion on Nov. 19 as a Riverfest Elora presentation.

The concept of the band was the brainchild of Skip Prokop, a drummer from Toronto who became a session musician, and Paul Hoffert, who was writing off-Broadway musicals when the two put their heads together.

They pulled together the finest musicians and created a sound that crossed the musical genres of rock and jazz.

Their first performance was at Toronto’s Rock Pile in 1969; their second show was at Carnegie Hall. These were the early days of Canadian content regulations and Lighthouse originated the concept of a cross-Canada tour.

Lighthouse has all kinds of connections with Elora, not the least of whom is Alan Ralston.

His decades-long friendship with Hoffert and Hoffert’s wife Brenda, who is manager of the band, is the main reason the band would even consider playing an intimate venue like the Legion, with seating for 300 as opposed to the 20,000-seat concerts they usually play.

“They don’t usually play small venues like that,” Ralston said. “It will be a great experience.”

Ralston himself is an interesting character. 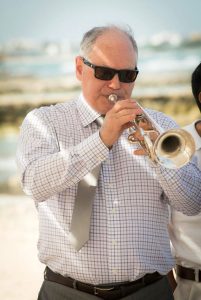 He has two lives in Centre Wellington. He’s the founder of Ralston CanSafe in Fergus, a company that makes safety supplies. He sold the company in hopes of retiring and bought it back in 2020. Among their offerings: masks.

In his other life he’s the founder of the Elora House Band, also known as Alan’s Band, that often plays venues in Elora. Ralston is the one wailing on the trumpet.

He contracted a rare form of encephalitis in 2020 and was treated in hospital until January of this year, when he was released. It was touch and go for some of it, he said, and he was largely unconscious through most of it.

“They knew something was wrong with me – I kept having seizures. But they could never figure out what it was,” he said.

His bloodwork was sent to the University of Western Ontario, where it was identified at LPG2 encephalitis, a rare form. Encephalitis is an auto-immune disease that causes swelling of the brain.

“I woke up in hospital with no memory of the previous two years,” Ralston said.

Part of his recovery included music and that’s a bonus for ticket holders for the Lighthouse concert. Ralston said he’s in top form musically and he’ll be playing with the band on Nov. 19.

The encephalitis has caused some memory issues for Ralston, however, and he continually apologized for pausing to come up with the right word or taking the conversation down a rambling tangent.

This interview, on Remembrance Day, had him reflecting on his father’s war service as an air gunner and wireless operator in the Second World War.

“My dad used to say ‘Every day is Remembrance Day for me. There’s not a day goes by I don’t think about those guys,’” Ralston said of his father.

Ralston attended the same high school in Toronto as his father, where there was a strong music program. That’s where Ralston found his musical beginnings.

He played trumpet in the 1970s in Toronto and crossed paths as a session player with many bands, including Lighthouse. He joined some of their tours but after a while Ralston found touring and rock band life was not the lifestyle for him.

In 1977 he started Ralson CanSafe in Fergus and settled down in the community.

He could never turn off music completely however, and he continues to play in festivals and other venues in the region, with lesser-known bands and big names when they come this way.

And the Elora House Band recently passed the 10-year mark.

Lighthouse, he said, will be a wonderful reunion for him and a great night for anyone who sees the show.

Tickets are $62, available at riverfestelora.com.