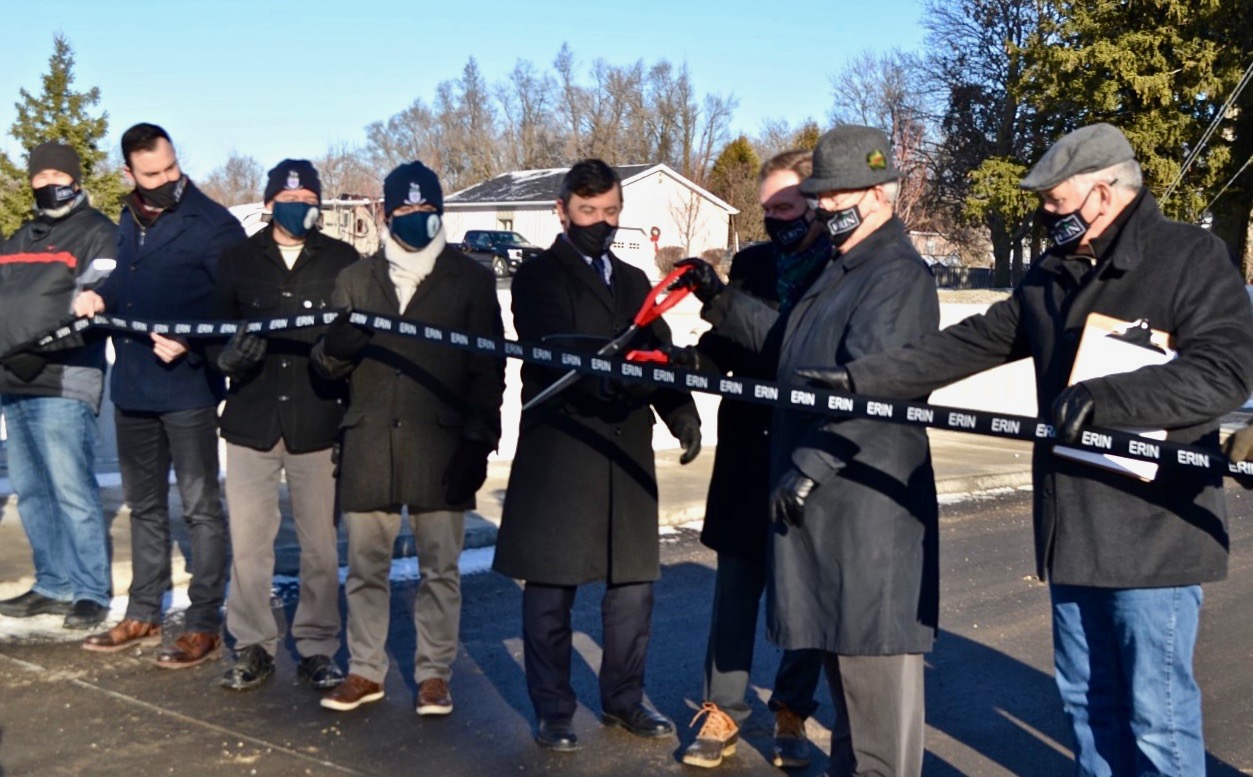 Dignitaries gathered in Hillsburgh on Dec. 18 to cut the ribbon on Station Street, marking the end to reconstruction of the bridge. In the centre of the photo are Wellington County Warden Kelly Linton, Wellington-Halton Hills MP Michael Chong, MPP Ted Arnott and Erin Mayor Allan Alls.
Photo by Joanne Shuttleworth

HILLSBURGH – After decades of need, years of planning and months of work, the Station Street bridge in Hillsburgh officially opened on Dec. 18.

The Town of Erin received $1.5 million through an Ontario Community Infrastructure Fund grant in 2018.

The funding allowed the town to commence construction of the project, without leaving a large deficit for the town.

The remainder of the project is cost-shared with the County of Wellington.

“For 50 years it needed to be done,” Alls said in his remarks to the crowd. “Now it is done and I’m so pleased.”

Linton called the project “a good example of partnership between the province, Erin and the county.

“I love that you’ve retained the heritage structure. This is a good example of what we can do when we work together.”

The Station Street Bridge was originally built in 1917 and was identified in 1971 as being in need of replacement.

The new bridge also creates a safer route for drivers and emergency vehicles.

Some of the historic railings from the original bridge have been saved and installed on the grounds of the Hillsburgh library, which is just beyond the bridge.

Bronte Construction and Triton Engineering, who were contracted to complete the work on the bridge and dam, kindly donated their time and materials to relocate the historic structure.

“This has been a lesson in perseverance,” said Erin county councillor Jeff Duncan.

“It took two terms for the Town of Erin to get it done. But the opportunities are endless now.”

In an interview after the event, Alls said the bridge was identified in 1971 as needing work and as time went on, it only got worse.

He said he understands there were objections to how it was done and concern about fish and natural habitat.

But the project went through the environmental assessment process, he said.

And the bridge – wider and safe again – will help pave the way for new development as well.

“Hillsburgh is positioned to grow by 7,500 people over the next 25 years. This bridge will help with that too,” Alls said.