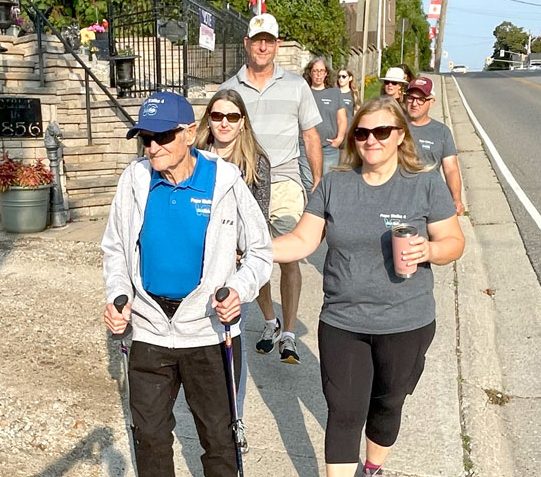 Russell Mackay, 84, passed through Rockwood on Sept. 17 on his 75-kilometre walk to raise funds for SickKids Hospital in Toronto. Walking with Mackay is daughter Crystal Mackay, front right, and other family members and supporters. Photo by Patrick Raftis

ROCKWOOD – Russell Mackay set out Sept. 16 to walk 75 kilometres from Guelph to Toronto to raise funds for SickKids Hospital.

While this would be a major undertaking for anyone, Mackay’s journey, dubbed “Papa Walks 4 SickKids,” is particularly impressive as he is 84, diabetic and legally blind.

Family members say Mackay is known as “Papa” to many, because he has a big heart for kids.

“Everyone can do something to help other people,” states Mackay.

“And we can all use a little more help and good news than usual these days. This is my small way of helping the many kids and families who rely on SickKids Hospital.”

Mackay started visiting an eye specialist at the Children’s Hospital of Eastern Ontario (CHEO) about 15 years ago when he lost his sight due to diabetes.

He vowed to do what he could to help children in both Ottawa and Toronto hospitals.

One of his motivations is his wife, Doreen, aka “Nana.”

She is  grateful for the important care SickKids Hospital provides, as her father drove her there every day for the first weeks of her life, states a press release from Mackay’s team.

Mackay is a retired farmer who walks about 8km a day to keep active.

He decided to take his walks from farms to cities. He walked from his hometown Beachburg to Ottawa in 2020 with incredible support adding up to over $120,000 in donations.

For this latest venture he left Guelph on Sept. 16 at 8:30am, walking through Rockwood, Acton and Mississauga, and planned to arrive at Sick Kids Hospital on Sept.  21.

“I’m doing it for the SickKids on University Avenue in Toronto because we have a lot of sickness with those kids, and cancer; I am diabetic and I also am blind. So I actually am doing for it those kids too,” Mackay told the Wellington Advertiser as he prepared to set out from Rockwood.

“I love kids and I have grandchildren and some of my family have been in hospital …  in Toronto, the SickKids. And I do it for that reason,” he added.

Noting he will soon be 85 years old, Mackay hinted this might be one of his last big fundraisers.

“I’m not going to stop walking … I may do a few more small trips,” he said.

Despite his diabetes and related blindness (he has about 25 per cent vision) Mackay feels the walking, along with a good diet, helps keep him in fit.

“Lots of vegetables. Lots of fruit. I’m not a drinker … I don’t smoke,” he explains.

During the walk, Mackay, who is accompanied by his wife, as well some of his children and grandchildren, covers about 12km a day, walking in 2km stretches before resting.

By Tuesday afternoon his total had surpassed $18,200.

Anyone wishing to support  Papa Walks 4 SickKids can donate online through SickKidsFoundation.com or mail cheques to the foundation with “Papa Walks 4 Kids” in the subject line.